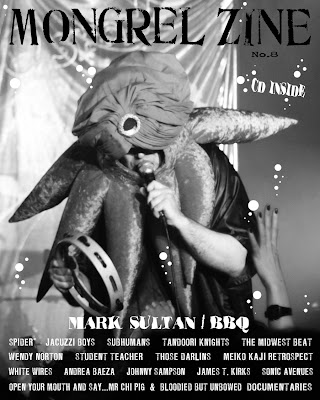 So: generally speaking, as a music journalist, my favourite stories to write are comeback stories, especially when the comeback is local, and even better if it's somewhat unlikely (the New Creation, Tunnel Canary, the Pointed Sticks reuniting to tour Japan... all of these were wonderful to research and write).
My second favourite kind of story to write is a story about a very smart or creative band that doesn't get a lot of attention - to help spread the word. This can take various forms - writing about Nomeansno for a Japanese fanzine, for example, since the Japanese don't know Nomeansno that well, or getting the Minimalist Jug Band or The Sorrow And The Pity into the Straight and thus introducing them to a whole new potential audience. People tend to appreciate press the more it stands a chance of helping them out, and God knows, I like to feel appreciated.
If the band has a colourful backstory or a point of view I sympathize with, all the better.
Add this all up, and it makes perfect sense that the Subhumans end up being the band I have written most about in my life. They're local; their reunion in present form took quite some time to get off the ground, with Brian leading a couple of faux-Subs until both Mike and Gerry's participation could be secured. They have left-leaning politics that echo and, truth be known, were a formative influence on my own, and really solid, classic punk songcraft - Brian, Mike, and Gerry are three of the best songwriters in Vancouver, up there with Art Bergmann and on par with the very best songwriting of Joe Keithley. Still, they somehow just don't have as big an audience as they deserve - more kids seem to get out to see the Furies than the Subhumans, which is kind of strange to me, since, cool as the Furies are, they're nowhere as unique or sophisticated as the Subhumans. I wonder if the sheer intelligence of the Subhumans lyrics ends up working against them? To see the band joking about whether they "seem to be relevant" in the Tabata doc (see below) is kinda sad, all things considered. Hell yes, they're relevant! I must demonstrate this to the world... 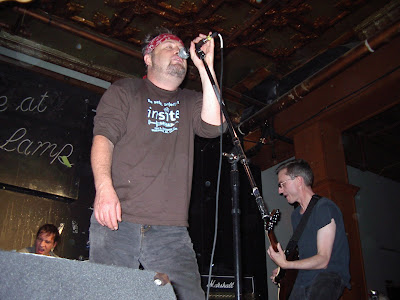 The Subhumans at the Lamplighter a few years ago; photo by Allan MacInnis. Note Jon's head in the corner!

In the service of this mission, I have done articles on the Subhumans for The Straight, Punk Planet, The Nerve Magazine, Ox Fanzine, The Skinny, and now, Big Takeover (see issue #66, out soon!) and Canada's own Mongrel Zine. And while that Mongrel article is probably one of the lesser ones, writing-wise - it's a rather brief thing I pieced together a day before the 'zine went to print from talks with Mike and Brian on a visit to the Hive, where they were recording Same Thoughts, Different Day - it's the one that diehard Subhumans fans need most to seek out, because the band has given Mongrel a demo from the No Wishes, No Prayers session to put on their CDr - a slightly rough but indubitably powerful version of "Slap In The Face." I also got Brian talking a little bit about what happened with the uber-rare No Wishes, No Prayers, which will be appreciated by Subhumans fans slathering to hear these tunes again. The rest of the CDr is very fun - lots of really cool bands getting noticed by Mongrel! - but the Subhumans track is sheer punk geek gold.
Note to the Subhumans: whenever Card gets back from his shtick with SNFU and you get a gig together, please practice up "Slap In The Face!" ("For The Common Good" would be another one off that album that I would love to hear live... or "Canada's Favourite Sport"... or "Mobile Electric Chair..." or...). I promise you: there will be at LEAST eight people in the pit who go fucking wild to hear these songs live. I will be one of them!
Posted by Allan MacInnis at 6:17 PM