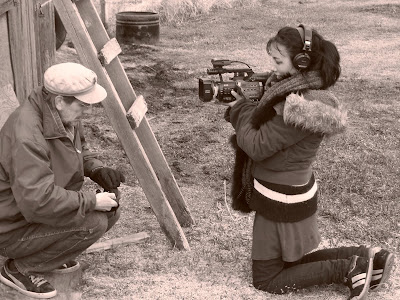 (Susanna Tabata interviewing Art Bergmann. No photo credit provided on the DOXA site, but I'm guessing it's by Randy Rampage, who took a similar shot; otherwise, it's probably by Danny Nowak, the former Spores frontman and Hard Core Logo cinematographer who, along with Susanne, shot the film...).

Good news: there has been an added screening, on May 16th, of Bloodied But Unbowed at the Cinematheque! Anyone not on board for tonight's event can check that out. Y'know, folks, I really did plan to do something MORE to support that film, but even if I were still writing for The Skinny (whom astute readers will realize dumped my big, Olympics-related Chris Walter interview onto their website without actually printing it in the paper - the cads!), they haven't published in three months, as they get more involved in promoting shows in East Van. (I'm told that they will eventually re-emerge, but not in time to plug this film). The only other people I'm writing for locally at the moment are the Straight, but Mike Usinger himself did the Straight piece ...and did a fine and prudent job of NOT plunging into any of the fascinating, DEFINITELY bloody politics behind the film, which has more than earned its title, surviving funding issues, internecine disputes between some of the major players, and... well, more than we'll ever know, God willing. It would be all too easy to get distracted from what the film is actually about, in delving into such things (which John Mackie gets a little closer to... but not much).
That's another reason I didn't do more to plug the film. Y'see, I'm a scab picker at heart, who associates journalism with peeling back hardened crusty things and poking my finger into the sore spot. This tendency of mine has led to some fairly ugly action on this blog in the past, particularly in regard Direct Action, AKA the Squamish Five. Things got ugly enough the last time I opened that door that I ended up deleting almost all the relevant posts - 'cept one: I kept my Terry Chikowski interview up, out of respect for him, and because it actually has stuff in it that hasn't seen the light of day elsewise - it's an important read for anyone who cares. (Most comments have been removed from the post, note; I would remind people commenting on this blog that I will not publish arguments ad hominem or attempts to slander people, no matter what you feel your grievances are). I'd actually futzed around with doing something along these lines, about the Direct Action section of the film - but after I discovered the Straight had matters covered, ultimately decided to let it die.
Last excuse for not doing more than I did - no one appraised me of the press screening, and I was too caught up in my own bloody life to get on DOXA about wanting to be there or getting a screener. I snoozed, I lost, and it's just as well; I haven't had time or space to do much of anything journalism-wise lately, save for a handful of music notes and reviews for the Straight and a few articles on the Subhumans' new album, including feature interviews for upcoming issues of Big Takeover and Mongrel Zine. I'm still very excited about the movie tonight and urge anyone who cares about the Vancouver music scene - even if you aren't a punk - to get a ticket for the Sunday screening, if you aren't going to be there tonight.
Oh, and there's an additional showing of No Fun City, too. I actually didn't make it to that one the other night - I was too exhausted, and ended up giving away my ticket to come home and get a good night's sleep. Life's like that, these days.
...And now it's time to shower and get to work...
Posted by Allan MacInnis at 5:36 AM