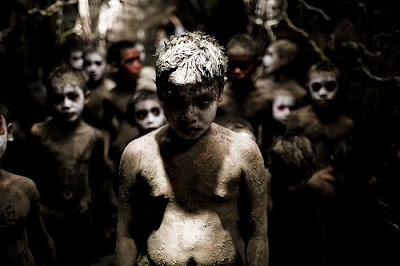 Caught up with another PV'd DVD I'd missed theatrically, Vinyan, which is a bit of an oddity - a sort of "arthouse exploitation" film set in Thailand and Burma, about a young Western couple (Emmanuelle Beart and Rufus Sewell) who are mourning the loss of their only child in the tsunami that devastated that region six months prior. The film charts their journey "up the river" in hopes that a boy glimpsed in a video of refugee children might be their son. The wife grows increasingly unstable and the husband's ability to keep the situation under control grows more and more fragile; they're unable to trust the locals who are "helping" them, unable to negotiate the journey on their own, and not even sure if their son really is alive...

It's kind of unfortunate, given how richly cinematic Vinyan is, but you can't stop thinking of other films when you watch it - the lush, damp jungles and tropical rainstorms and the whole Heart of Darkness river journey bring to mind Apocalypse Now and the jungle films of Werner Herzog, or maybe Barbet Schroeder's La Valee, with hell at the end instead of utopia (if that is indeed what one finds at the end of that film). Since there is a tribe of jungle children - improperly described in some writing about the film as "feral," since they are clearly of a human orientation, not wolf-kids or such - one obviously considers Lord Of The Flies. There were even times where I was reminded of the absurdly gore-drenched recent Rambo film, insofar as Burma seems to have become the west's current #1 cinematic symbol of lawlessness and savagery.
Spoilers mount if I try to talk about the film thematically, however, or to assess what it adds up to. Even to mention these next two films is to give a vast deal away - neverminding the tropical jungles, the real points of comparison for Vinyan seem to be Nic Roeg's Don't Look Now and Lars Von Trier's Antichrist (with perhaps a bit of Harlan Ellison's short story "Croatoan," which follows a playboy up a sewer into a kingdom of aborted foetuses, creeping in on the sides).

As with Don't Look Now, the husband's desire to both protect his wife and his own hope to find his child alive lead him ever closer to his undoing. As with Antichrist, the wife's hysterical surrender to her emotions around the loss of a child becomes a very urgent threat to her husband's well-being.
As with both those films - especially Antichrist, obviously - it would be fairly easy to make a case for Vinyan being a misogynist text; at the very least, the resolution is deeply gynophobic. Though initially the instability of the wife seems a secondary issue, the conclusion of the film suggests otherwise. Ultimately, all the rather nicely handled details about the cruelty that follows on poverty, and the thought-provoking querying of the western couple's attitudes towards the Third World (as when they are given the opportunity to "buy" a child who is not their own) turn out to have been digressions, to be swept aside so the husband (and the audience) can look upon his wife with the horror she merits.
I suppose one man's misogyny is another man's archetypal working through of "woman issues," so I won't actually condemn the film on this count myself, except to say that I was rather disappointed to see all the interesting things the film was doing suddenly being subordinated to terror at the ultimate manifestation of the female's wrath - which is extreme indeed, bringing to mind certain scenes from the cinema of George A. Romero (I'll protect the ending just slightly by not telling you which ones). I had hoped for something less sensationalistic, for one thing. But I also felt kind of morally uneasy about what the film saw its conclusion as being. Just as it's kind of politically sick to subordinate the realities of the Vietnam war to a cartoonish expression of human darkness, in Apocalypse Now - find Jonathan Rosenbaum's writing on that film for more - it is more than a little grotesque to use the misery left in the wake of the tsunami as a mere background detail in yet another horror film about how women can getcha killed. There were many possible ways the film could have ended, and while I suppose I'm glad that it didn't end happily - with the cheap Hollywood feelgoodism of having them actually find their son - I'm not sure that the ending that is fashioned isn't a copout of another sort.
There's no denying, though, that there's a resonance to Vinyan that lingers. Most of the films it reminded me of were pretty good ones, and some of the individual parts are more interesting than the whole they add up to... See my review of Fabrice Du Welz's previous film, Calvaire, here.
Posted by Allan MacInnis at 8:06 PM