Leslie, My Name Is Evil: A Review

Just a brief note on Reg Harkema's Leslie, My Name Is Evil, now playing: if you're interested in keeping abreast of Canadian film, if you're interested in the Manson family or the 1960's counterculture, or if you're just an avid cinephile who likes thought-provoking, richly imagined cinema, it needs to be seen, but, at least as I remember it from its VIFF screening, it comes across as a very strangely "personal" film that might be a little confusing to viewers who don't know a bit of the background - the filmmaker's background, that is. 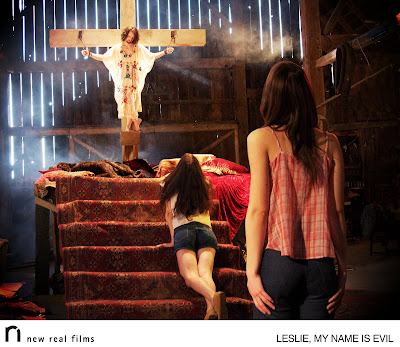 Maybe it's just that I know a bit about Reg - Monkey Warfare, too, which I spoke to him about here, contains huge swaths of his personality: he's an-anti car bike rider, a record collector, a thrift store detective (which is how he stumbled across his first edition of Helter Skelter, at a Vancouver Value Village), and has an interest in punk, leftist, and radical politics, all of which enter the film. He lives in Parkdale, where Monkey Warfare is set, but has a connection to Vancouver (as do his characters). And his love of the cinema of Jean Luc Godard infuses the film (and Leslie, My Name Is Evil) stylistically, with characters addressing the camera, words flashing on the screen, and other Brechtian/ meta-cinematic effects that highlight the artifice of the film and ask you to think about it as something crafted, rather than just passively accepting it as a story. The injunction to "write about what you know" seems to really apply to Harkema's cinema - bits of his personality seem to find their way into all his films, maybe a bit more transparently than with some filmmakers: finding the author in these texts doesn't take much digging, because he's right there on the surface.

With Leslie - which views the Manson family trial through the eyes of a conflicted male juror fixated on Leslie Van Houten - I can't be sure, but I suspect that it really helps to know that Reg had a Christian upbringing, which he wrestled with a bit. (My Motorhead-related interview with Reg shows how troubling that was - he destroyed signed Motorhead albums over the song "Don't Need No Religion," which has gotta be the best head-slapping "why I don't still have it" story any collector has told me. I mean, I don't have Nomeansno's uber-rare Mama LP anymore, but that's because Ty Scammell offered me $85 for it and I needed the money, not because I found the gender politics of "No Sex" objectionable or threatening). The chat I had with Reg for a Straight Music Note drew a direct parallel between Leslie (a "hot Dutch Christian chick") and his Mom, who was also the same: so how does someone like his Mom end up in the Manson family? This inspires an exploration into what we call evil in society, with the Manson family apparently filling in for those elements in the counterculture that both attracted and repelled the young Christian Reg as he went through experiences no doubt mirrored by his young juror protagonist, arguing with his conservative Christian father and trying to make sense of his attraction to the beautiful young murderess...

...all of which is somewhat problematic, actually, because:

a) It's not exactly fair to the 1960's counterculture to represent them with the friggin' Manson family, an extreme case and an aberrant spawn if there ever was one; but to some extent that's what Reg seems to be doing. His ambivalence about revolutionary change seems to cause him to fixate on extreme examples (much like I have fixated on Direct Action/ "the Squamish Five" - again, look at that big Monkey Warfare interview for more on that). It's not that this is exactly invalid, mind you - it's just bloody eccentric.

b) ...but if the film is an argument about mainstream culture versus counterculture, the film's conclusion (that there's nothing that bad about the Manson family compared to the socially sanctioned manufacture and use of quantities like napalm) thus becomes a bit strange: because while it IS an interesting and provocative way of pointing up hypocrisy in society and saying that we tend to punish others for our own sins, it might ALSO be read as a defense or endorsement of the Manson clan. Which I don't think is intended - last I saw Reg, he didn't have a swastika carved in his forehead - but Manson followers would probably actually kind of like this movie, which has been described as anti-American hate-speech by some less contemplative critics. Manson himself, who made lots of gnomic statements about how he was being punished for the sins of society, would probably like this movie, too. I'm not sure that counts as a glowing endorsement of it!

c) Finally, to some extent, there is probably an Oedipal reading of all this possible - something you wouldn't guess unless you realized that Reg saw Leslie as a parallel for his Mom, which was a bit of a missing puzzle piece until I talked with the filmmaker the other week. I won't do Reg the disservice of attempting to psychoanalyze the film or filmmaker in depth, but to some extent the movie ends up being more interesting as a portait of the filmmaker's identity-formation than it is as a statement about society... an identity formation that to some extent (as with everyone, I might add) isn't complete; Reg takes us to the limits of what he understands about his personality and drops in our lap questions, not answers, using the Manson family iconically, for what light they cast on his dark places - or what dark they cast on his light...

...all of which is a really fucking weird thing to do in a feature film, you gotta admit, but it's still a pretty interesting (and really fucking unusual) bit of Canadian cinema: an Oedipally-inflected working through of Harkema's attraction/repulsion to the Manson clan - tell me that's not more interesting than, well, any other movie playing in Vancouver right now?

I have other quibbles with the film, mind you - I strongly suspect based on the acid trip scenes that Reg either hasn't done acid, or hasn't done enough acid - and I didn't actually care for his Manson-actor so much; but it's definitely an interesting piece of film and a must-see. So: 'nuff said: trailer for it is here.

Reg Harkema is currently working on a film adaptation of John Armstrong's book Guilty Of Everything. 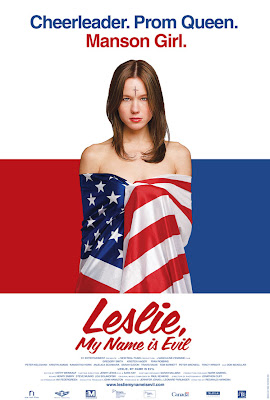 Posted by Allan MacInnis at 8:18 AM