It was in 2007. Eugene Chadbourne was onstage at the Cobalt with Han Bennink and three members of Robots On Fire. I had a Eugene Chadbourne interview written and ready for publication and needed a photo - if I recall correctly, the gig was happening just before the publication of the forthcoming issue of The Nerve Magazine; the issue would promote Chadbourne's upcoming jazz festival appearance, which this gig was an early forerunner of. Problem: I didn't have a camera, and even if I had, I knew from past experience that, in the low light atmosphere of a rock concert, any photos I tried to take would look likely be completely unworthy of print - as this photo of mine of Doc Chad at the Cobalt in 2009 amply demonstrates (compare with Femke's pics from the same show, a few posts back). It's so far along on the "bad" scale that it borders on coming out the other end as beautiful, like an abstract impressionist rendering of the artist, but I assure you, all beauty herein is completely accidental: 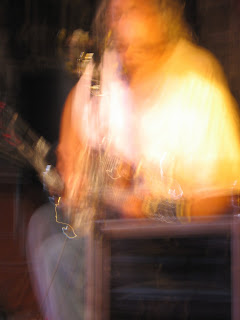 (Photo by Allan MacInnis
but don't you dare credit me;
in fact, don't show anyone.
Don't even look at it)

Then I noticed this tall, skinny blonde woman was intently photographing the whole set, from a variety of locations around the club. I had never seen her before, and I'd been to my share of shows locally. It seemed at least possible that if she were taking pictures, she might want someone to see them. The only question would be, "Hey, do you work for free?"
I mean, at least I could grin widely and follow that up with, "...because I do!" (Or I did back then, anyhow. I try to avoid it where possible these days...).
Luckily for me, Femke didn't laugh in my face, and a copy of the Nerve with Fem's picture of Han Bennink at the Cobalt went back to Amsterdam with the drummer, who was most pleased with it. I still remember then Nerve Music Editor Adrian Mack's reaction when I offered him the photo: "hey, I'm even impressed that you know someone named Femke van Delft!"
Suddenly, Fem and I were on assignment together for the Nerve. I met her at her skytrain station and she drove us out to cover Under The Volcano. Due to a spat rendered irrelevant by the subsequent death of the paper, my Nerve Magazine review of that day omitted my lines about the Rebel Spell's performance (largely focusing on how strange it was to see punks moshing on green grass on a bright summer's day), to say nothing of Femke's photos - though I think some of them ended up being used in my Razorcake interview with the Rebel Spell (issue number 42, also featuring a Chris Walter interview with the Tranzmitors, so it's a good backissue for fans of local bands to buy). I love how, if you look carefully at most of the pics from that show, you can see Bev Davies and Carola of the Jem Gallery lounging against a tree in the background - it was, in fact, the first time I met Bev Davies, though pictures of hers had complemented my writing, too, by that point. 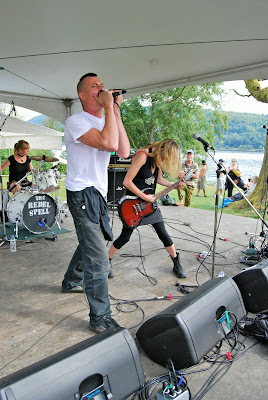 Photo by Femke van Delft, not to be reused without permission
After that day, we worked together in a variety of contexts; I got full exposure to Femke's finely-honed sense of the absurd (ask her about the llama sometime), and I got to know how community-minded and committed to her work she could be. Take, for example the time when, since she needed better light to work with at the 'balt and realized they didn't have the time, staff, and possibly the moolah to do anything about their many burnt out bulbs, she trundled off to the grocery store down Main Street to buy some kitchen lights out of her own pocket and did the job of installing them herself, much to the benefit of all those who like to be able to actually see the bands onstage. I've seen Femke stand on a chair beside a mosh pit at a Subhumans show where she could have gotten careened into at any moment, taking photos without the slightest concern for anything aside from her subject; I've also seen her in pretty much every other possible posture or place for a photographer save for hanging upside down from her ankles over the stage, though I don't rule that one out as a possiblity if it means getting the shot. I've witnessed Femke being assigned near-impossible lighting conditions and a three song limit - at this Animal Collective show, say - and pulling out amazing photographs. Fem's been stepped on, insulted, forced to shoot covertly from the back of the venue, harassed by security, and asked to do far too much for too little reward - but she continues to do it, and any casual look through the last three years on my blog will turn up amazing photo after amazing photo by her.
I've seen various art projects of hers as well as photos, too, the most memorable of which was an easy chair punctured by pencils, clustered around the areas corresponding to the human heart and the crotch and almost entirely bypassing the brain - a comment on television. Her capacity for critical engagement with her photography, and with the form in general, is one of the most interesting things about working with her - she has lots to say about her work, about music, and about the representation of musicians in photographs, especially in her "Light Parasite" series. Acknowledging that concert photography is a "form of tourism," with writers and photographers feeding parasitically off the aura of the celebrity, she adopted a very interesting approach by which she sets her camera to a long exposure and then shoots in the hopes that there will be a flash used elsewhere in the venue - a more literal form of "light parasitism," which, when it pays off, creates a very unusual and quite lovely ghostly effect, as this picture of Stephen McBean of Black Mountain, adjusting his gear at Richards on Richards, will illustrate: 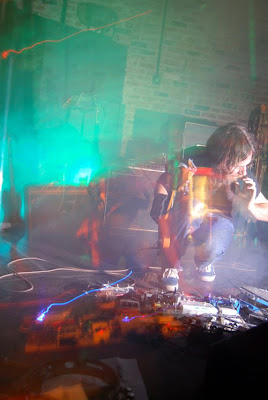 To date, Fem's pictures have run alongside my writing in The Nerve, The Skinny, Razorcake, Ox Fanzine, Bixobal, The Wire and elsewhere. Where my writing would be without her contributions is a questionable thing - she has made my work look very, very good over the years, and she's been a supportive and reliable friend and cohort; enthusiastic and articulate collaborators like her are hard to come by. She'll be the subject of a show at the Railway Club - their first ever concert photography show, I'm told - with Fraulein Fanta, Marko Polio, and Yellowthief performing on opening night, next Thursday, June 3rd, from 7pm to midnight. When I last checked in with Fem, she was unsure if she'd do a series of all-local shots or not; images hadn't been printed, so she wasn't 100% sure what would be included. There was talk of running pictures of Swank, Black Mountain, Bison BC, Ejaculation Death Rattle, the Subhumans, and a Creaking Planks she likes (perhaps this one?) because "it's just so Rembrandt." (I agree!) - there will be at least 18 pictures, to my understanding/ Fem's photos are also appearing in the Chapel Arts rock art show, alongside the work of Bev Davies, Adam PW Smith, and others (their site doesn't seem to have been updated recently but I'm sure committed folks can find the information they need somewhere online). Those interested in rock, the local music scene, or photography - or combinations off all three - should check both of these shows out, and if you see Femke, be sure to get her talking about her work; she always has interesting things to say...! 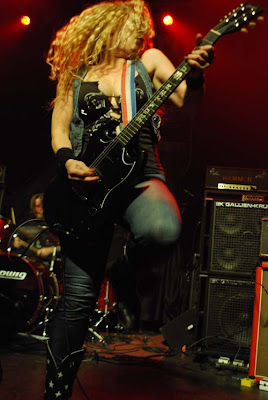 Nashville Pussy by Femke van Delft, not to be reused without permission!
Posted by Allan MacInnis at 8:34 AM

Femke is an amazing photographer and very generous. She taught me what to look for in photos - what works and what doesn't, there so much I learned from that woman.