Return to Central City: a fine night of music with David M. (and many, many others) 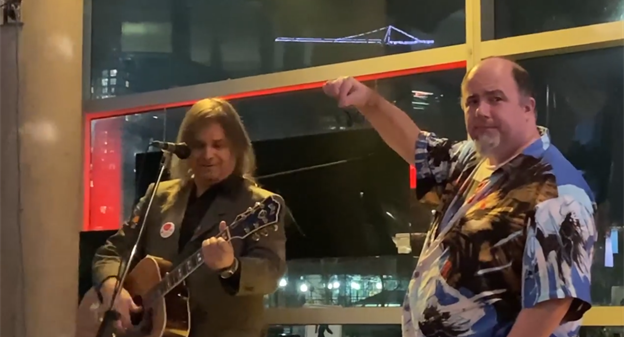 So Erika and I went to see David M. at the Central City Taphouse and Kitchen - a short walk from Surrey Central Station - when he played there last month, marking a triumphant return to the old stomping grounds of NO FUN, the Beatles of Surrey. 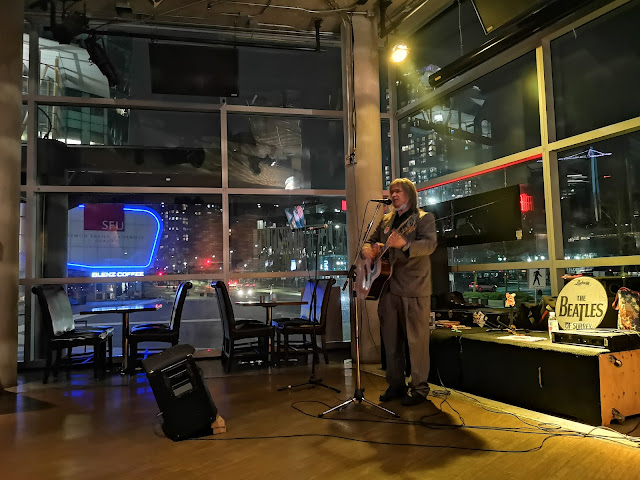 I'd been rooting for M. to get a new venue, and Central City was an exciting one to see him in. The venue had probably the best sound I've heard at one of his shows - certainly better than the Heritage Grill's backroom, where there used to frequently be some "systemic cracklings" to be heard (and often competing bluesrock riffs from the front). I'm sure the Princeton has a fine sound system - it's been awhile since I've been there - but they also occasionally have noisy drunks, clacking pool balls and passing trains (one time M. had to compete with a tableful of arguing Italians). I don't think I've ever heard M. sound better than at Central City, and I've heard him a bunch. 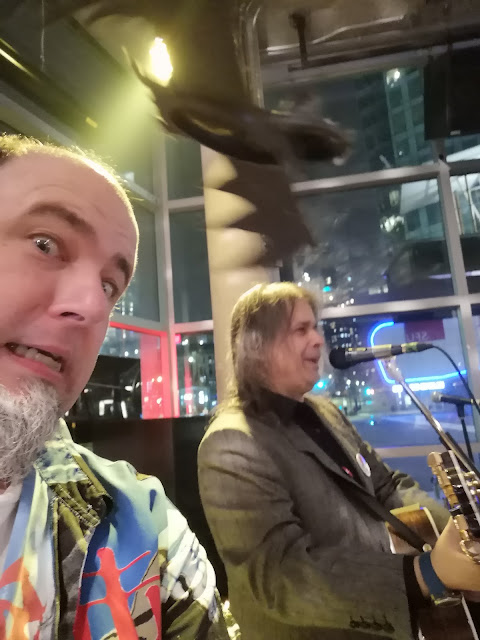 Some old No Fun fans came out, including Ken Nermo, AKA "Ned," the man who wrote "Old," the less-well-remembered of the two NO FUN songs that appear on the Vancouver Complication (the other being, of course, "Mindless Aggression"). David M. performed "Old" in Ken's honour, and also broke out "If I Was a Bat," apropos of Erika and I celebrating our fifth anniversary (the song was first performed at our wedding, with M. setting to music a lyric I'd originally written when riding my three-wheeled bicycle through the backroads of Japan, being swooped by bats, but with the two of us repurposing it to be about my anxieties at having my first tongue surgery, a week before we got married. Bats aren't known for their conversational skills - hence the chorus - "If I was a bat, girl, would you still love me?") I, uh, "played" the bat, and joined in on a few background eeps, which is about all I am publicly fit to sing these days, as my tongue cancer story progresses. Other members of the NO FUN posse were present, with Pete Campbell relegated to tambourine duties for the night - he'll be back on second guitar next time, I'm told - and David Dedrick of the Sneaky Dragon podcast holding the scroll for David's sea shanty, "The Ship Called the Anna Maria," so we could sing along. Arr! 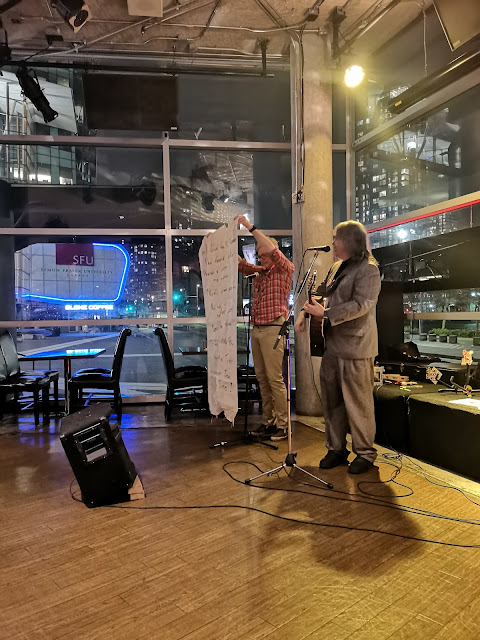 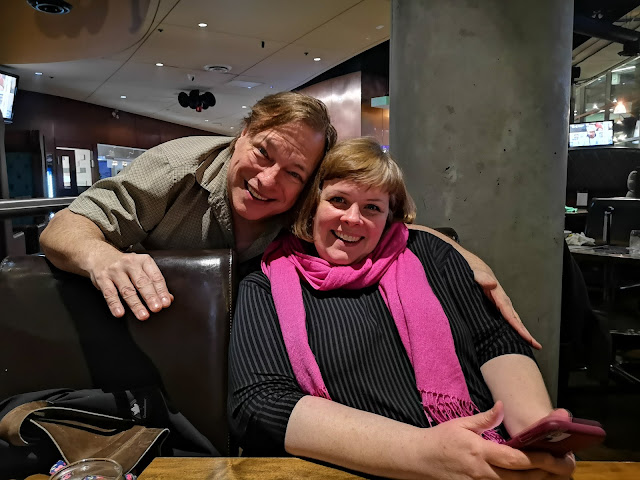 David also, at my request, covered the NO FUN classic "Oh to Be on Heroin," from Tape One of Snivel, but rewrote the lyrics to be about "COVID Vaccination," introducing the song with an explanation that completely effaced the Sugarcane Harris anecdote I'd posted here in favour of telling people that I was worried that the lyric might be a bit edgy for the room. Of course, with no mention of heroin appearing whatsoever in the song as it was performed that night, his comment was completely and utterly incomprehensible to anyone who a) did not know the original song, b) had not read my blogpost about my request, and c) was not privy to my privately telling David of my concern that songs about heroin might not go over so well. I am pretty sure that this means that David's joke was incomprehensible to anyone but me, possibly even conferring to everyone else NOT in on the joke (or "everyone else," in short) that I had some sort of fear of COVID vaccines. But then, he also did a couple of ads for NO FUN's corporate sponsor Gorgo, which hasn't been found in a candy aisle since the 1980's, so... if you object to the gnomic, he's probably not the man for you, anyhow. 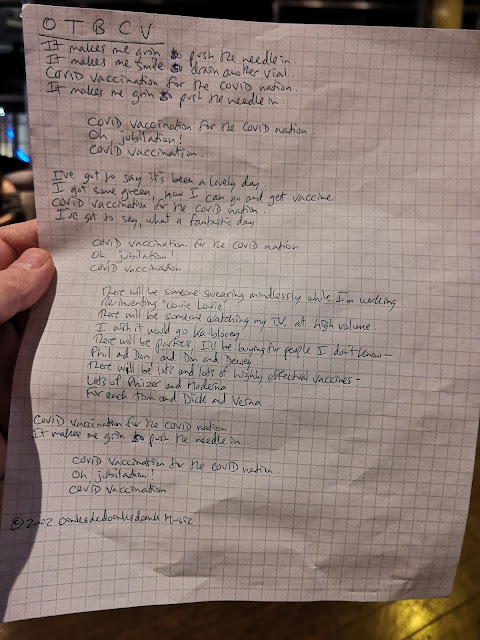 In fact, everything about the Central City Taphouse that we experienced was great, including the food. Erika (doing keto at that point, hence the absence of potatoes) ordered a steak that was Keg-quality at least, but at half the price... 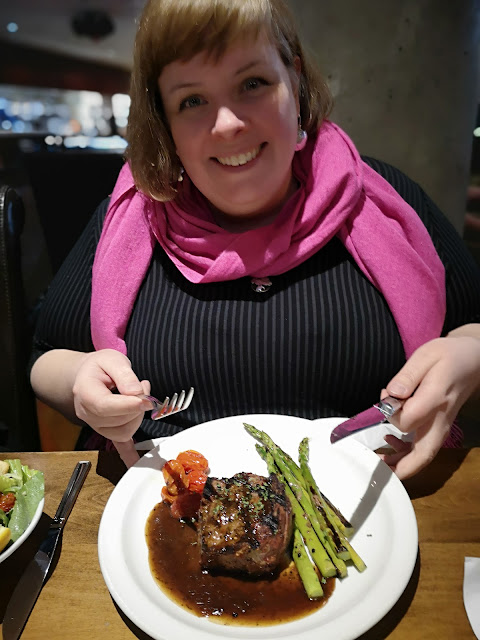 I opted for a chicken wrap that, with my tongue in its current state, was a little hard for me to chew, ultimately - even after I'd picked the kale out - but was utterly delicious, so unless you have had tongue cancer surgery recently, I highly recommend it... 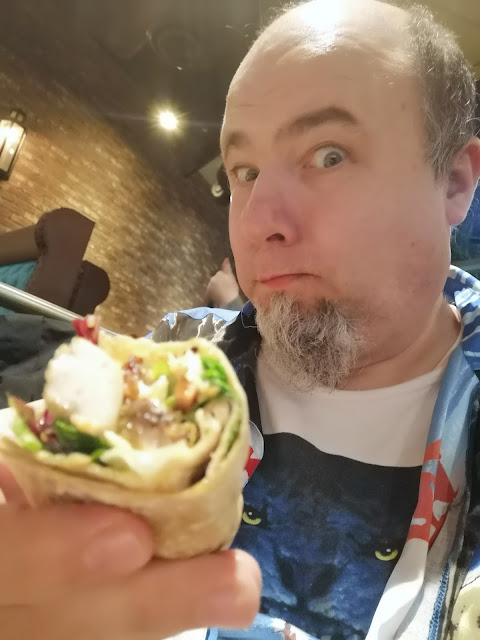 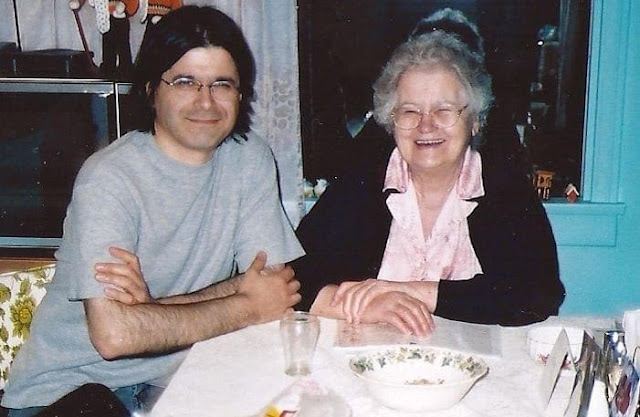 There is much else to report coming up at the Central City Taphouse. I do not know tonight's act well - Jimmy Baldwin - but I greatly enjoyed his recent contributions to the 2022 Bowie Ball. Enrico Renz of Red Herring - interviewed at length here - will perform there on April 2nd (sadly, I have other commitments). You can hear him playing solo here - like M., Enrico is one of my very favourite people on the Vancouver music scene, and Red Herring were the band from the Vancouver music scene I was most excited to see reunite - featuring, of course, the great Stephen Nikleva on guitar. Of course, Red Herring are also doing their own thing at the Princeton on Mondays, for a couple of weeks yet, but in an unusual configuration - the "Red Herring collective," with some members being absent and maybe some guests present. They're kind of building up to something, I'm told - so it's kind of a unique time to see them. 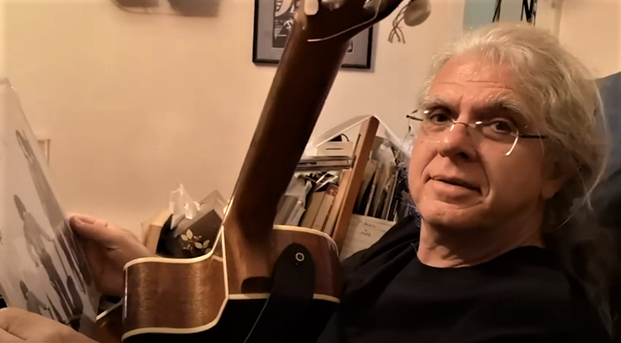 You can keep track of other things happening at the Central City Taphouse on the Dancing Sawhorse Facebook page. There are many people whose music I have yet to encounter, and can say little about - I'll let you do your own research into Leah Barley, Joseph Blood, and Shiloh Lindsay - but Bowie Ball regulars might be curious to check out Danny Echo, whose playful adaptation of Van Morrison's "Here Comes the Night" has been a standout moment two Bowie Balls in a row. And people who follow Vancouver music from way back might want to check out Ron Scott's project Ladies and Gentlemen, also featuring Vancouver's best-dressed bassist, Bob Petterson, on bass (only Vancouver musician I can recall asking, "Is that a Nudie suit?"). Ron's involvement in the local scene stretches back to the days of Insex performing at Hardcore 81. He also regularly plays with Mike Van Eyes - the Jerry Lee Lewis of Vancouver, doing Saturday afternoon gigs at LanaLou's, of late, also with Bob on bass - and has also performed with Howard Rix, Herald Nix, Paul Hyde, Colin James, Mac Pontiac and Phil Smith and Corsage, to name only a few of the bands he's been in! 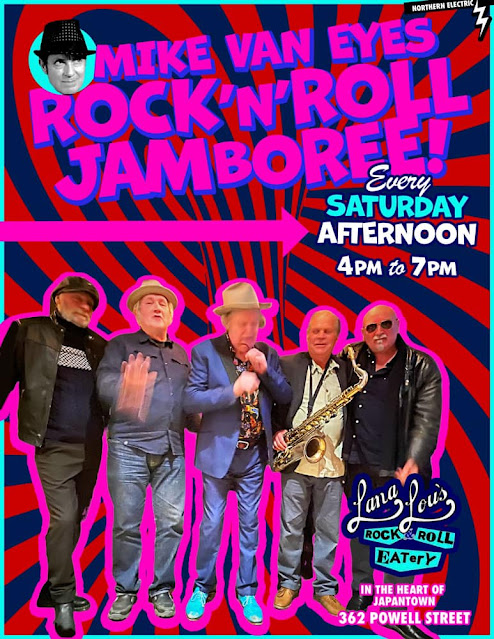 Finally, speaking of birthday parties, the day before David M's birthday bash, Orchard Pinkish will be hosting his own - "a Possibly Post-Pandemic Pirthday Party" - though he is shyer than M. about saying how old he is turning. I have interviewed Orchard a couple of times - see here and here, for example - and seen him in at least a half dozen bands, including the Little Guitar Army, the Strugglers, Orchard Pinkish and his Horny Hands, the Old Canadians, the Wasted Strays, and Daddy Issues. Orchard shares with David M. the distinction of having one of the finest potshots at the Georgia Straight ever to make it into song, which even Mike Usinger was amused by - compare Orchard's "Wasting Time" with David M's "40 Years," of his Christmas album, Five Wenceslases and 27 Other Contemporary NO FUN Christmas Classics. Orchard also has the best stage-name-based-on-an-anagram that I am aware of.

That's a lot to take in, and it's not even a complete list - Ford Pier (interviewed at length by me for the Georgia Straight, back when) will be doing a set in early May, which I believe will be his first post-pandemic gig. I could be wrong about that. Maybe if I'm up to the task, I will ask Ford to break down the lyrical references, puns, and so forth in "Ponce De Leon Vs. the Risible Shuck of Authenticity" by way of pre-show publicity? I can think of no more densely-witted, wordplay-rich lyric in Vancouver music history, and to my knowledge, the song has the only use of the word "cloaca" in a rock lyric.

I am only now discovering that the line that I thought was "I've never been Dennes Boon" is actually "I never bent any spoons." (Me, I've only bent spoons by sticking them in too-frozen ice cream. I don't think that's what Ford is getting at though). This is a singularly strange thing to discover on D. Boon's birthday. I have pointed it out on FB to Mike Watt (for whom I have seen Ford Pier open) and Ford.

Anyhoo... maybe I will see some of you at Central City sometime? I mean, who the heck needs to commute into Vancouver when there are shows this good in the other direction?