Garfath Does Parties: falling down a silly anagram rabbithole with an American Werewolf, and emerging with an answer to a mystery 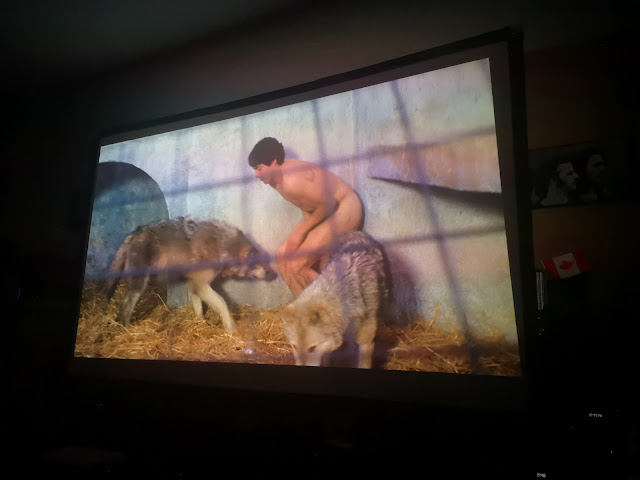 So a buddy of mine has a projection unit and screen, instead of a TV, and occasionally I go over to watch movies with him. Last night, we took in an old favourite of mine, An American Werewolf in London, which I have owned in VHS, on DVD, and on blu-ray, but never seen on 4K. In fact, I haven't seen it as large as it was last night, or as clear, since I saw it projected first run, when I was a young teenager, making my father take me to it in Vancouver (it was restricted, and in fact the only film, in my teen years, that I tried to get into when underage, back at the Starlight cinema in Maple Ridge. My argument that I had already seen it won me no sympathy at the door).

It was great to see the film again - and great to see a hundred odd details I'd missed previously, from the blurry but very recognizable poster for Cassavetes' Gloria that my friend spotted in the subway scene... 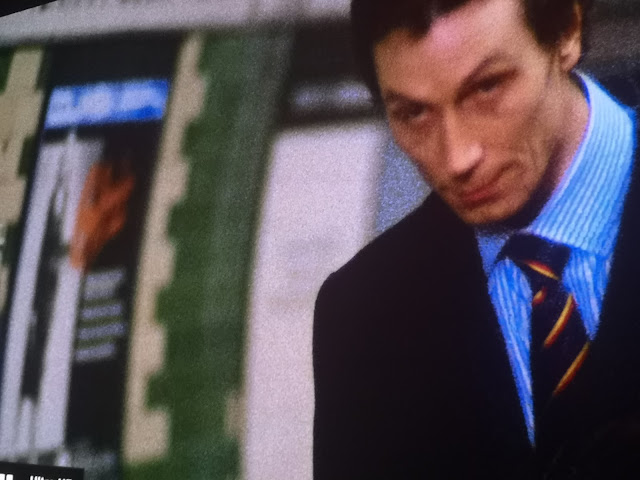 ...to shots of punk graffiti scrawled (often in the same handwriting,  suggesting it was deliberate set decoration, not just a coincidence) on both the walls of the underground and the phone booth that David calls home from - you see the name of the UK Subs more than once, and also can spot the Jam, the Sex Pistols, and others, none of which would have meant anything to me at all when I first saw the film at age 13 or so (I was 13 in 1981, the year of the film's release, and didn't learn about punk rock or hear the Sex Pistols until 1982; certainly I had no clue about the Jam or the UK Subs). 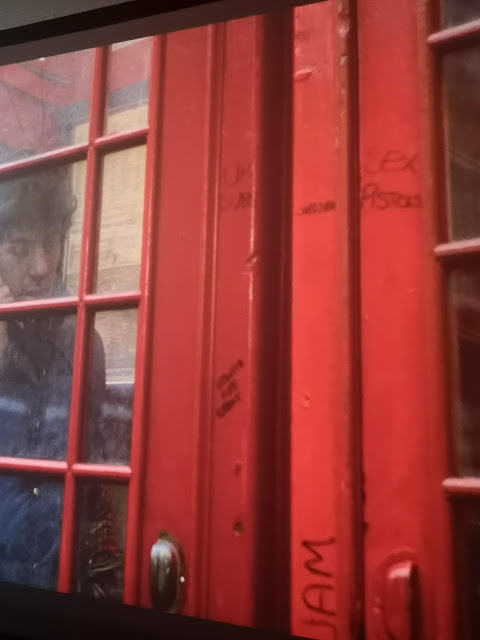 The phrase is unusual enough that at first I thought it might be an anagram. (Note: this is actually a foolish rabbithole - there's a much easier explanation, which we will get to presently - but it will be more fun if you come down the hole with me first). Sometimes when you are doing anagrams, trying to rearrange the letters of a phrase into a new phrase, you can cheat; when no words suggest themselves, you can make up a name. Let's say you have a phrase like "paradise for the stag," for example (actually backformed out of "Garfath does parties," and not particularly meaningful, but it will serve the purpose here as a let's-pretend starting point). You look for the first word that jumps out at you - let's say you see "parties." (This leaves you with "ad for he stag"). "Parties" is a noun, so - if your aim is to produce a sentence, next you want to try for a verb; maybe "forget," as in, "forget parties," for example? You scratch it out on a piece of paper - it's a promising phrase - but it takes away a few too many letters; you are left with a mere "adhsa" to work with, which isn't much if you want another word or two.

After a few minutes of rearranging "adhsa," you discover that you find nothing you like. ("Parties forget a dash?" Not very evocative, that), so you decide to scrap "forget" and look in the previous combination of letters ("ad for he stag") for a shorter verb than "forget," so you have more letters to play with in making your anagram. Aha, there's "does!" That's a good, simple verb. So you will now try to fill in the blank on "____ does parties."

I hope you are finding my breaking down the process of coming up with a good anagram interesting.

Sadly, once again, working with "___ does parties," you are stuck with an unworkable tangle of letters, "afrhtag," for the sentence's subject. "Fart-hag does parties?" Well, maybe, but what's a fart-hag? The phrase goes beyond the evocative and mysterious into vulgar obscurantist Dadaism or something. You guess that you could cheat by having a single un-worded letter sticking out - pardon my reference to a homophobic slur, but something like "Artf-g H does parties," say - but that also doesn't appeal - because it's a slur, and because of that wordless, meaningless H, which is a cheat. So we still don't have a good phrase.

This is how we might arrive at the conclusion that it would be best if it were a name: Garfath! "Garfath" does parties. It's enigmatic, but it has a certain ring to it, and Garfath FEELS like it could be a name - maybe the night janitor at Hogwarts, or something? A minor orc, or dwarf warrior? Why not.

Anyhow, thinking that Garfath might be exactly this - a name arrived at by working with the letters you are stuck with in the process of creating an anagram - I tried coming up with what MIGHT have been the original phrase, and had no luck. I spent about an hour on the bed with a notepad, patiently writing out "Garfath does parties" and crossing out each letter as I used it. I noticed that there's a "spaghetti" available, so tried that word, working with what was left: "Spaghetti rode as far?" "Safe spaghetti ardor?" "Road spaghetti fears?" Nah, none of those seem like phrases that John Landis might have wanted to code into the graffiti. "Grasp at fad theories?" Also not likely, though I did feel like I was grasping at a theory throughout. The best one I came up with was, "So I farted at grapes," but it doesn't mean much. "A short, rapid gorefest" works, too, but the film, concise and gory though it may be, is neither "rapid" nor a "gorefest."  I was stumped.

Then it hit me that maybe the problem was that I was Googling the whole phrase. The three words "Garfath does parties" may ONLY appear in popular culture in An American Werewolf in London, but - if Garfath is actually a real name, maybe there's information on it?

And so I arrive at David Garfath, a camera operator on, yes, An American Werewolf in London, and Second-Unit Director on Landis' later film, Spies Like Us. I have no information about the specific nature of the teasing was - was Garfath available for hire at this point to film people's parties? Was that a thing back then? But that "most mysterious" piece of graffiti was apparently some in-joke in the film, the set decorator (or Landis himself?) playfully and obscurely referencing a cameraperson.

Without that 4K projection, I would never have known any of this - and wouldn't have wasted a couple of hours down this silly rabbithole. But let me just say, dear reader, if at some point in the future you have arrived at this blogpost by your own Googling of "Garfath does parties," that a) you are welcome; b) I am pleased that you are also Googling the phrase - that people will still care enough about An American Werewolf in London, perhaps for years to come, that it would be something anyone Google, and that c) I deeply approve of your quests. Have fun. If you have MORE information than I about the specific kinds of parties that Garfath used to do, or can pass this on to John Landis, wherever he may be, to FULLY clarify this matter, I would be most obliged.

See you next Wednesday.

Posted by Allan MacInnis at 4:01 PM

Gee, my subjunctive on "something anyone Google" sure looks funny.