Creating Your Own Culture: An Anton Newcombe Interview

NOTE: THIS SHOW HAS NOW BEEN CANCELLED.
“When you are compelled to do the right thing, when you live by some internal code, and you don't shy away from standing up to and in the face of adversity or against the mob or the man no matter what that might mean to "your fame or prospects," it's doing the right thing... for some it might be taking a knee, or even a baton or bullet. That's a fire inside you, and it doesn't grow on trees. I create my own culture because it is what I need and what I feel isn't being provided. It doesn't exist unless I participate.” – Anton Newcombe 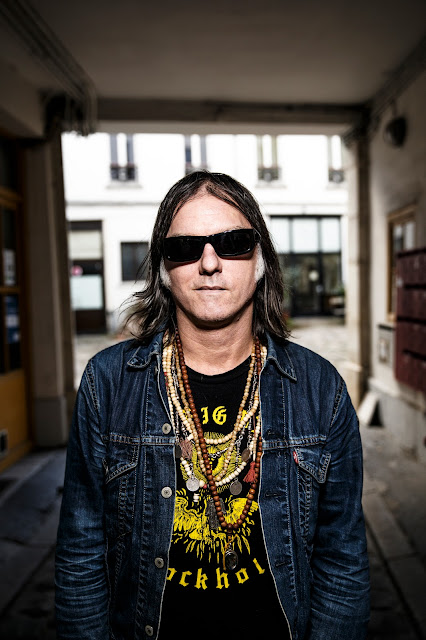 Photo: Thomas Girard
Anton Newcombe, asked about the feeling of connection that the Brian Jonestown Massacre facilitates among their fans, says that he considers the band "folk music, the people’s music, and I believe in creating culture."
Most people, of course, would not call the Brian Jonestown Massacre folk music. The band, formed in San Francisco in 1990, combines elements of shoegaze - especially on their first album, 1995's Methodrone - and 60's psychedelia, particularly as follows from the work of Rolling Stones founder Brian Jones, one of the first rock musicians to bring world musics into rock, among other things producing an album by the Master Musicians of Joujouka. Jones' influences on the Stones are most acutely felt on Their Satanic Majesties Request, which the Brian Jonestown Massacre rather brilliantly riffed on with the title of their second album, Their Satanic Majesties' Second Request, which featured their crowd favourite "Anemone" (given as "Anenome" on the CD cover).
The Brian Jonestown Massacre do come closer to what most people think of as "folk" territory on other recordings, especially their fourth album, Thank God for Mental Illness (1996). But most people have an impoverished concept of what folk music is; all authentic popular music, but especially underground and counterculture music, is a folk phenomenon, music by the people, for the people.  And of course, as Anton adds, it is "very natural for people to bond over shared interests," with music being especially powerful in creating those bonds.
That doesn't entirely capture how open Newcombe can be with his fans, however, connecting with them online via Dead TV or his Soho radio broadcasts, broadcasting entire tours via the internet, and generally just interacting with his listeners more than one might expect, bringing people together worldwide around their participation in this community - members of which have used the term "family," to talk about the bonds they feel - not just with the band, but between each other. I have plenty of people in my life who I've connected with because of music, but what I've observed (from outside, mind you) of the BJM "family" is actually rather special, perhaps a bit closer-knit than most families of this sort.
Vancouverites among that family will be heading to the Vogue Theatre on April 15th to see the Brian Jonestown Massacre play live, sharing songs off their 19th studio album, Fire Doesn't Grown on Trees, which comes out on A Recordings, June 24. The opening cut, "The Real," has lyrics that resonate against the quote at the top of this page: “Fight the beast until it dies, raise your sword up to the sky!” In the press release for the record, Anton says:

That line is like fantasyland! ....It’s the little kid in me, full-on St. George shit. It’s as much a declaration of anything that I could ever muster. A lot of the album is about affirmation by just living. Existentially, this time period has felt pretty dark, so it’s about fighting the good fight. I’m singing to empower other people. First of all, I’m getting whatever I need out of it, but I can see it as something other people can identify with... I'm trying to give comfort and support to the listener in a very matter of fact kind of way.

Another new Brian Jonestown Massacre album, The Future is Your Past, is due in October/ November.
Anton took time from his tour preparations to answer a few email interview questions. My questions are in italics, below. 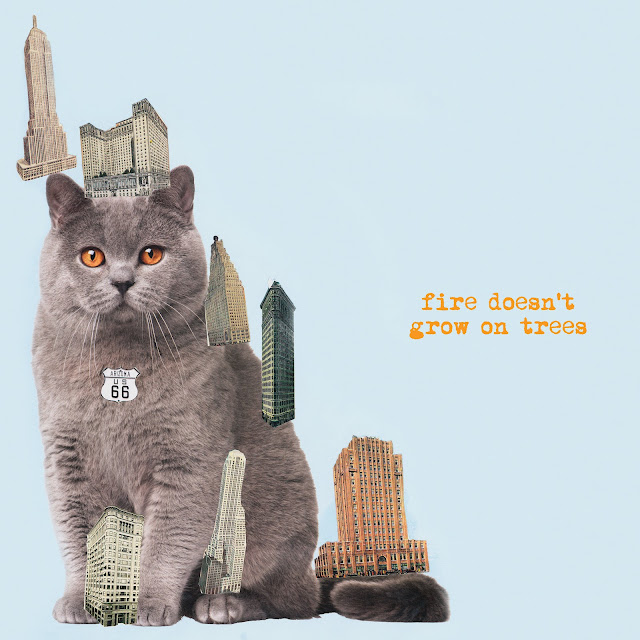 Will you be broadcasting this tour, so people can see or hear it? (I gather you’ve done that in the past – not sure if it was just to an “inner circle,” or…?).
I could, but I don’t think so, it’s all I can do to stay healthy.
There are bands that play nearly the same setlist every night, maybe with minimal variations due to time constraints; have you ever been tempted in that direction – or have you always varied sets from night to night? How do you feel about the publication of setlists on websites like Setlist FM - people peeking ahead to get a sense of what is going to be played?

There are no rules, however we try and learn an hours worth of extra songs then switch it up everyday slightly- this tour’s setlist is over half unreleased music, but it is very strong so I don’t think it matters.

Are the videos for “The Real” and “Ineffable Mindfuck” are your work – where are the images coming from? Are there filmmakers whose visual aesthetic we should acknowledge? (“Kenneth Anger Meets Roger Corman?”)

My friend Mrs Muddles makes all them for us.

​​Do I gather you have recently recovered some stolen instruments, and that some of those are with you on this tour? How does it feel to be playing guitars stolen so long ago? Has getting those guitars back influenced your current music or your setlists…?

They are great guitars, and it was a real tragedy when all of our gear was stolen on tour. Fortunately I was able to replace everything and more but at the same time, all of my gear is old and all of it unique. I’m very lucky to get a few things back after 15 years, to be able to write and record these new album then tour with them is fantastic. 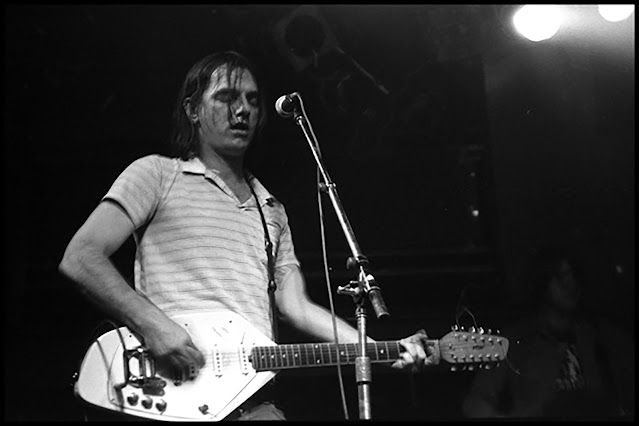 Anton Newcombe at Richards on Richards by bev davies, Sept. 2006; Bev thinks this is one of the instruments that got stolen in NY on the same tour...

Do you often pick up instruments while you tour? What are you looking for on the road these days? Do you have places on this tour that you are looking forward to returning to, or shopping at…? (Do you pick up a lot else on the road – records, keepsakes?).

I do search for deals on old stuff, last tour I shipped 869 kilos of amps and things back, this time I’m searching for a Hammond b3 etc

Do I gather that you have a practice of doing a draw for two tickets to people who donate to Oxfam? How does it work?

It’s very simple, everyday I ask people to make a donation and show proof, I count the number of donations then pick a winner or sometimes five winners via a random number generator. 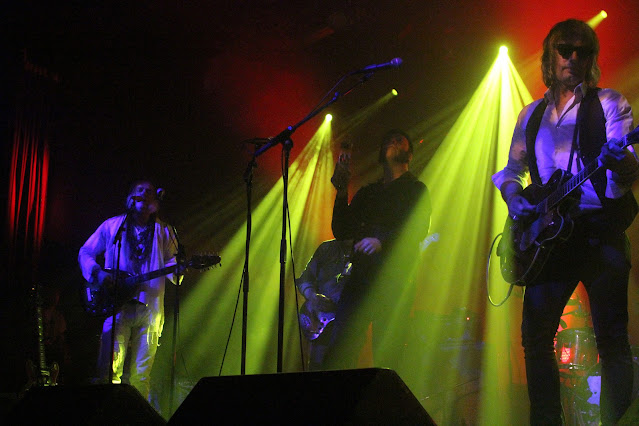 Brian Jonestown Massacre, May 23rd, 2016 at the Commodore, by bev davies

I have experienced from my limited travels that audiences are vastly different from culture to culture. Are there places – audiences in this country or that - that “get” you better than others, that listen to you better than others, that annoy you or confuse you or pleasantly surprise you? Do you have peeves, when it comes to audiences? (Any advice on “How to be a Good Audience Member?”)

Everyone seems pretty respectful and just enjoying themselves lately - who wants to stand next to some drunk jerk yelling stuff anyway.

Why the cat on the album cover? (It looks a bit like Robyn Hitchcock’s cat, Tubby, except Tubby only has one eye). Are you a cat person – do you have pets? 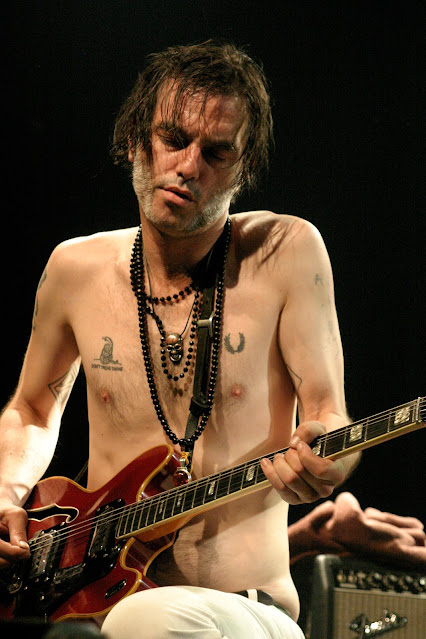 End that portion of the interview - this is Allan again: My final question was a bit involved - and Anton's answer was extremely concise, but too provocative not to include. Y'see, I have always utterly loved the bandname of the Brian Jonestown Massacre, linking Brian Jones, his death, and the cultish elements of rock and roll. It always reminds me of something Efrim Menuck once observed when I interviewed him about a Richards on Richards show by Thee Silver Mt. Zion Memorial Orchestra - we'd been talking about Nina Simone and Phil Ochs, but could as easily have been talking about Brian Jones:

In the personal lives of people who are engaged in this thing of making music, there are no happy endings. There are plenty of, like, cautionary tales, tragically short lives, it’s just…It’s a train wreck. The history of modern popular music is a train wreck. It’s got all these sort of like utopian ideas bubbling everywhere, like a song can make you feel like you’re not alone in the world, that there’s purpose to your life, music has that power... but at the same time, if you dig deep and you look at the story behind it, it’ll just break your heart in 20 million places. It’s like a sucker’s game... So, out of love of music and out of making music, you end up making your own sort of hall of saints and you write your own little, what’s the word, catechisms, the Catholic thing there... those little books that teach you how to pray proper? You write your own little catechisms, if you’re a certain type of personality.

Anton, asked if he has his own "hall of saints," responded that "I respect a lot of people. I don’t idolize anyone in the history of the planet." Fair enough, but would he agree with Menuck about the trainwreck that is popular culture?
"Most people are fronting," he responded. "It’s ridiculous to create art or music with the goal of making a shitload of money." 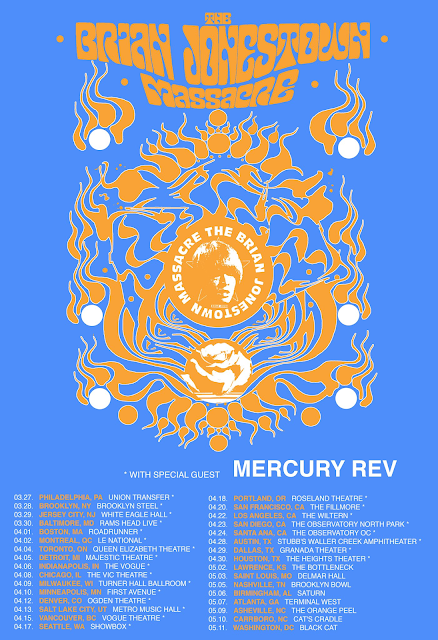 Post-script: almost forgot that I asked Anton about Frank Zappa. He's said publicly that he doesn't like Zappa's music - really really doesn't like it, but Anton seems to have at least a couple of things in common with Zappa, like composing all the music his bands performed, and then teaching the parts to the band so they could perform them.  So what does he have against Zappa, exactly?
Anton's answer: "I don’t like his music - he was against the anti war movement because his dad sold Agent Orange for a living and that paid for Frank’s goofy ass shit."
Posted by Allan MacInnis at 4:32 PM