Having declared on this very blog that my favourite acts (of those I saw) at the Bowie Tribute Night last month were Orchard Pinkish, Trailerhawk, Cass King, and Eddy D. and the Sex Bombs, I admit to having done quite a double-take to see that all of them are playing together April 2nd, again at the Rickshaw, as part of the Hillbilly Soul Revue (Facebook page here). I've seen Orchard - I met him as "Richie" - with the Little Guitar Army, of course, and the Strugglers; I have probably seen him with Motorama, too. I hope this interview explains itself, but I had questions, and he had answers, and here they all are! Thanks to the inimitable bev davies for the photos. 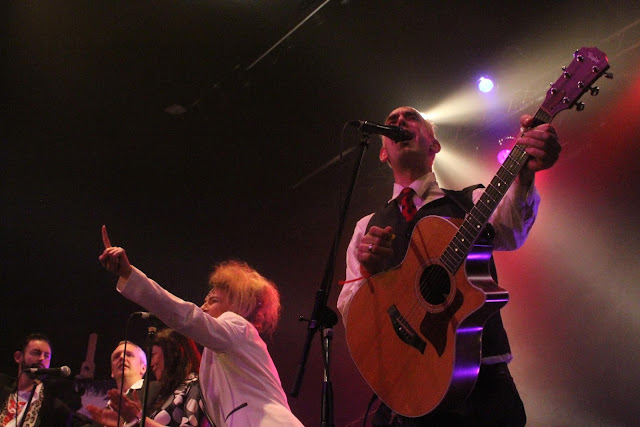 Photo of Cass King and Orchard Pinkish (with Old Canadians in the background) by bev davies, not to be reused without permission


Allan: So what's your backstory on the Vancouver music scene?

Orchard: I moved to Vancouver in 1998. Shortly after that I played bass in a punk band called Autopussy. I liked that band. The songs were catchy but it was a bit rough around the edges live. I played in another band with Mo Sherwood who plays drums for Wasted Strays now. Wasted Strays are fantastic and I am lucky to play Mandolin for them. I played bass in Motorama for 10 years, and got to play a lot of shows in the U.S. thanks to Marcus. If it wasn't for Marcus I probably wouldn't be doing shit to be honest.

Any comments on the Little Guitar Army? Favourite moments? What do you miss most/ least? What are you proudest of?

Little Guitar Army was the most incredible thing! I think the trip to Creston was the best and worst thing. That band was overwhelming. Having 6 or 8 of those miniature guitars playing is hard. Its hard to hear, its hard to mix, and its a tight squeeze sometimes. When it wasn't all aligned it was bad. When it worked, which was quite a lot, it was compelling. The spectacle component was always a crowd pleaser. I have never had that kind of fan reaction since LGA. It was a really special band. I love all the people who were in that band and I miss working with all of them.

I love anagrams and assume your actual name - tho' I won't print this, if you don't want me to - is Richard Hopkins. How and when did you become Orchard Pinkish? (Were you at one point called "Prickish," as well, or was that some sort of botch in The Skinny?)

I wanted to play some acoustic guitar and sing. I felt I could learn how to sing, and I wanted to do some country type of stuff. I grew up listening to Country and it was something I had never done. I am also a nut for word games, so I picked what I felt was the best country sounding anagram for my name, Richard Hopkins. Seamus and Steve Wire call me Prickish for sure, but that seems to be a comment on my personality. That's fine by me though, at least I have a personality.

After the Bowie show, the next time I was at Red Cat, I went shopping for Orchard Pinkish albums. I couldn't find one. What albums do you have? Do you sell them at the show?

I have one release: "Orchard Pinkish and The Horny Hands -Mittfull of Loonies" I have a few copies left, and I do sell them at shows. Its a decent first effort, and I think a few of the songs are actually pretty good. Its nine originals and one traditional. The songs were written between 2012 and 2014 and recorded 2014-2015. It it a very accurate snapshot of the first couple years of me doing this, warts and all. I am proud of it. Chopper, Matt, Rich, Ben, James and Bert are on it. Those guys are great and their performances on the record are great.

The Old Canadians happened specifically for the David Bowie tribute show. I just wanted to sing "Heroes" solo with an acoustic. David Hathaway, who is an old friend, asked to do the Reeves Gabrels parts and of course I accepted. I added Bob Petterson to fill the obvious gap on Bass and he brought Tony Lee along with him. We added the songs "Young Americans" (Bob's request) and "Fame" (David's request). Cass King had posted on the event page that she would like to sing "Fame", so we asked her to join us for that song. We all collectively decided that we needed b/u's for "Young Americans", so Christine Best was added. Cass brought Rachel, Vanessa, Joey and John for added b/u's. To cut a long story even longer, it happened in the best, most organic way possible and a number of new friendships were forged.

I play mostly with a trio I call BFHD (Bird Frightening Hay Dolls) which is Chopper and Bob. Chopper and I have played together since LGA and I play Bass for his surf band "Chopper and the Saucermen". Bob Petterson is just a tremendous bass player and was a great supporter of what I was doing, so when I Richard Katynski became unavailable for the Planet Pinkish series at the Railway he was the clear choice. Jon Card will be joining us on drums for the April 2nd show. I treat him like a normal guy, even though he is less a man than a god.

How did you come to roots music? Do I assume you started as a punk? What was the gateway drug?

My very first guitar teachers were country players. I listened to a lot of Country and Western music as a kid through my parents generation and I loved Opry and HeeHaw on TV. I was a strange, lonely kid, obviously. My siblings were 70's teens, so they brought tons of other stuff to the table, including Devo, Kraftwerk, Zappa, most of the popular 70's and 80's rock. The closest thing to punk before high school was the B-52's. I loved it all. I loved disco and Journey. Everyone seemed to listen to it all, with the grownups leaning toward Country and the youngster towards Rock, and only my brother listening to Devo, Zappa, Kraftwerk and Genesis. My brother remains awesome. True story.

When did you actually begin singing? I was shocked by how great your voice was at the Bowie gig, because I've seen you play many times, but had never heard it before, never having gone to an Orchard Pinkish gig....

Thanks Al. I did my first show as a singer at the Princeton in November of 2011. I think its up on youtube, Karen Hansen videoed the whole thing and posted it.

What's your connection with Cass King?

I met Cass through the Bowie Show. I had heard of her and a few folks told me she was great. When the Bowie thing went down, I just took a leap and asked her to join us. It was a great decision and I consider myself lucky to work with her.

I don't want to give myself credit where it's not due but it's kinda neat to note that the Hillbilly Soul Revue lineup is basically all my favorite acts from the Bowie Tribute Night. How did this get put together? Comments on the other performers?

It all came out of that Bowie show. Mo from the Rickshaw had enjoyed my set and was impressed by Cass. He asked us to put something together. I have know Tony Walker since I started rehearsing at Faceplant in the early 2000's. I have learned more than I can say about being a performer from watching Tony. TrailerHawk is a powerhouse band; the talent in that band is off the charts. The SexBombs are also just stacked with talent, and again are Faceplant friends. I play shows with them as often as they invite me. Then your blog came out and I said, 'Thats our show right there!' That said, I will also be featuring guest vocals from Mellow Friesen, Christine Best and Cass King and an appearance from Neil E Dee. This night is going to literally be non-stop entertainment.

Thanks for the interest Allan. I look forward to seeing you at the show. Orchard Pinkish's feet (in shoes), by bev davies, not to be reused without permission
Posted by Allan MacInnis at 12:37 AM