On reading The Island of Dr. Moreau for the first time: Lost Souls, vivisection, and colonialism 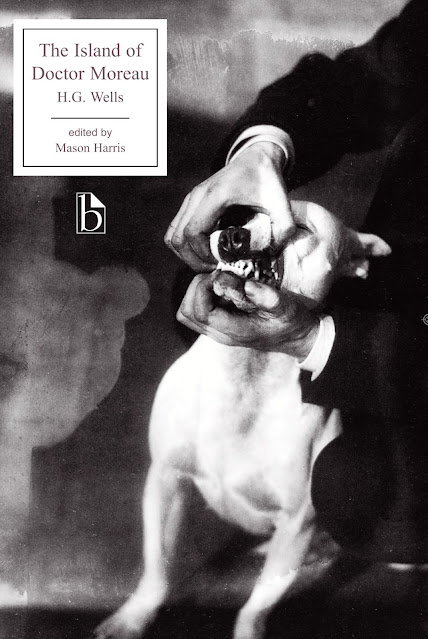 So I've been reading The Island of Dr. Moreau for the first time - in exactly the edition pictured above - and am really enjoying it, but it's very curious on many levels. I don't have an essay in me, but some scattered observations:

1) I had long heard in watching commentaries and featurettes on film adaptations and such that the book was written as an anti-vivisectionist tract. Certainly Moreau uses vivisection on his creatures - there is actually no mention of DNA or chemical changes brought about in his creatures; his primary means of making a puma into a human-like shape is surgical, for example. But there is a lot to the story beyond this - it is not so simple or single minded as being anti-vivisection. Moreau defends his practices; even the narrator, Prendick, seems at times sympathetic to vivisection in the name of science; and there is a real richness to the story that makes it very hard to reduce to one simple, single, didactic polemical intent.

2) Some scenes in the Stanley/ Frakenheimer adaptation of the book are extremely faithful - like the moment when Prendick first encounters a beast-man. Reading the book gives you a much fuller sense of how much Richard Stanley valued his source when writing his screenplay. This was not the only scene where I noticed parallels between the novel and the film, though it was the most striking. 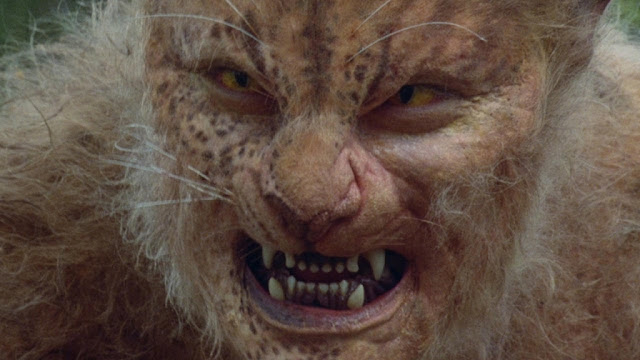 3) I have found 19th-and-early-20th century ideas of science sometimes so weird and backward that it has interfered with entering a text - like the idiotic misunderstanding of evolutionary theory in the film The Land that Time Forgot, presumably taken straight from the Burroughs novel; you get distracted from whatever point the story is trying to make by the overwhelming reaction of, "whoa there, this isn't remotely close to accurate science." But in fact - though there's no real way that Wells can explain how his creatures come to have language through primarily surgical or chemical means - the science is fudged enough that it still allows for engagement with the story - suspension of disbelief, or at least no "whoa there, this isn't remotely close to accurate science." It would be much, much harder to enjoy the book if Wells had tried harder to make the science seem more credible, while getting it vastly wrong. 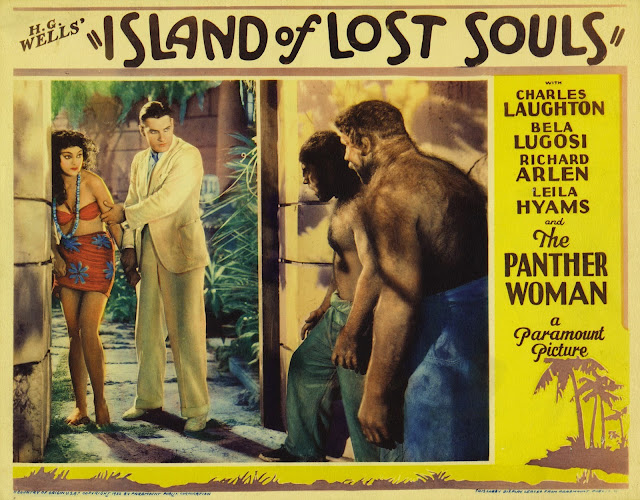 4) Another common thing mentioned in the film adaptations is that the panther-woman was created for The Island of Lost Souls, but that's not entirely right. There is no panther-woman in the novel, to be sure - no female characters to speak of - but the main animal that Moreau is working on through the novel is a puma, who is described as being female, and who in fact kills Moreau and escapes his lab in one of the later key episodes of the novel. So the latent idea of the panther-woman is there; she's just not a woman yet. 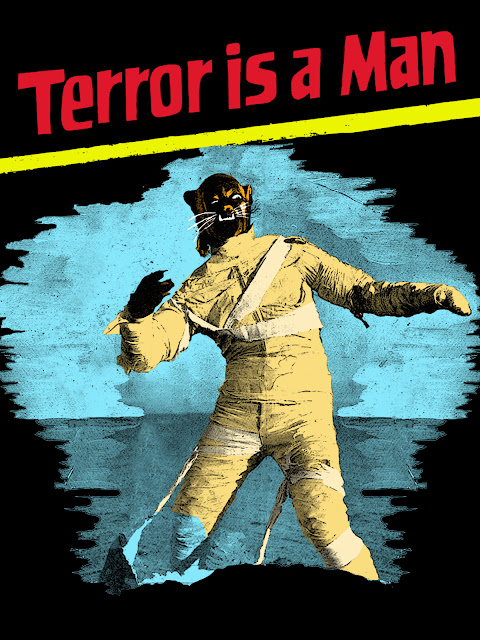 5) The novel, read from a contemporary perspective, seems to be much more about the "white man's burden," elevating savages into civilization, so to speak, with the beast-creatures being described throughout as brown- or black- skinned; described in one scene as wearing turbans; described as practicing pagan rituals; and Moreau seeming very much like a colonizer/ white plantation-owner, cracking his whip (and using religion and "the law") to keep his creations submissive (some commentary seems to be present about Christianity and its role in colonialism - especially when Prendick assures the beast-creatures that Moreau is still very much alive and able to chastise them for their infractions; some passages come very close to being parodies of things from the New Testament, the idea that the "Master" could return at any moment...). The story does not seem reducible to a didactic tract about imperialism or colonialism any more than it seems to be reducible to being about vivisection, but this element seems stronger in the book than any of the subsequent film adaptations that I've seen (tho' I'd like to see that Filipino plagiarism of it, Terror is a Man, to see if this element is upped; apparently, like Lost Soul, it is available through Severin). 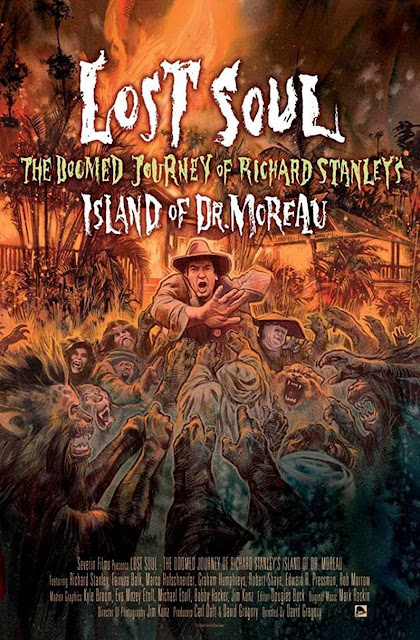 6) Richard Stanley of course has brilliant things to say about the book - especially about the parallels with Conrad's Heart of Darkness - in the Lost Soul film, which I greatly enjoyed (and which greatly enhanced my enjoyment of the Frankenheimer film that eventually emerged, which, especially in its director's cut, is much more watchable than I'd expected once you have Lost Soul under your belt, and certainly plays better from a contemporary perspective than it did when I saw it first run, where the chaos of the film and the weirdness of Brando caught me by surprise (incidentally, I also see that Severin has a 3-disc version of Lost Soul on sale! ...featuring an early silent adaptation of the story that I have never seen). Stanley does seem to know minute details of the book - like the idea that the Hyena-man is actually a fusion between a Hyena and a swine, which name/ description survived into his screenplay; so there is no question that he has read the book, and holds it in great esteem.

All the same, Richard Stanley makes a weirdly glaring error in talking about the story in the doc at one point: he asserts in the doc that Moreau dies at the midway point of the book, after which the beast-people are left to fend for themselves, forming their own quasi-government, which of course falls apart. Now, I don't know if there are different versions of the text, but in the edition I pictured above, the book - which is actually quite slim - has Moreau's death taking place in the final quarter of the novel, well after the halfway point, and if there is any inkling of the post-Moreau beast-people trying to be self-governing, it must be in the last 3 pages, because that's how far I am from the ending (as of this writing - I'm revising a couple of things since last I wrote, when I had 20 pages left to go; but self-government has still not emerged as a theme). Maybe he's talking about his own screenplay, and not the novel, but that wasn't the impression I was left with, since I was very curious about these aspects of the book and was in part prompted to finally read the book on the hopes that something very different awaited me. I really liked the idea of the beast people trying to govern themselves, so am a bit surprised, disappointed and confused that it turns out not to actually be there. How does he get that detail wrong?

All in all, it's been a fascinating read, and it really holds up as an adventure story. I was worried it would seem dated or stiff, but it's quite compelling, and truly enhances my appreciation for all three film versions of the story that I've seen. I recommend the experience! (The edition I depict above, by the way, has several lengthy scholarly essays included that look very interesting and compelling in their own right.) 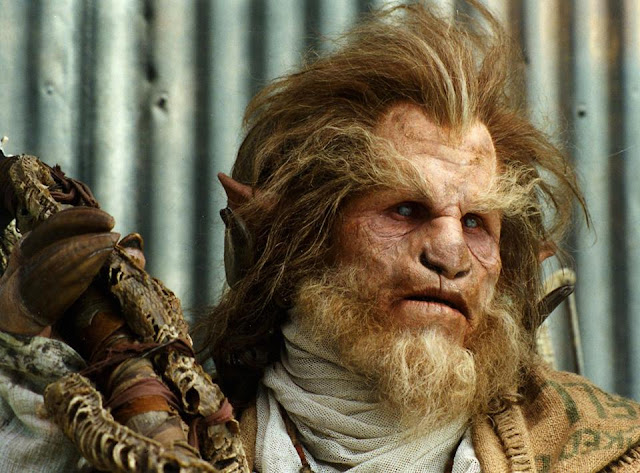 One final observation, not related to the book - though it does deal with a character who is much more emphasized in the film adaptations than in the novel itself: how is it that Ron Perlman is no big deal as the Sayer of the Law in the 1997 Moreau? He's PERFECTLY cast, his makeup is great, and he certainly has the actorly chops to do amazing things with a role like this. I'm a big Ron Perlman fan - have been since the days of The Name of the Rose -  and one reason that I was really excited to revisit the film was so I could see him in this part, but his scenes in the Frankenheimer film just sort of fall flat. What went wrong? Did he and Frankenheimer not get along, or...?

Best Sayers of the Law in film history: 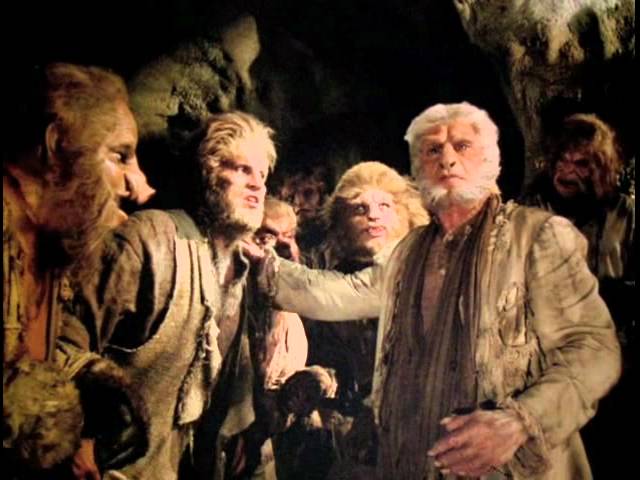