Petunia at the Trocadero! (Preserving his delightful formatting)

I have interviewed Petunia many times - here, here, here, and here, say (the last is on video!). The last time I saw him, I was walking down 4th Avenue during some special event or other, early enough in the pandemic that there were very few people out and about, despite pleasant weather - but there was a stage set up, and I could hear music and see a cowboy hat and knew blocks away who was going to be on that stage, long before I could make out a single lyric. I stopped and said hi and maybe listened to a bit of a Marty Robbins' cover ("Big Iron") before I continued on whatever my mission was. It's past time to see him again!

There's no one quite like Petunia in Vancouver, delivering country swing, folk, rockabilly and bluegrass with a tiny hint deadpan wit and dark surrealism; like the Red Herring residency at the Princeton blogged about a few posts back, his shows at the Trocadero, which looks to be a Greek pizza and steakhouse on Nanaimo, are an opportunity to see an unusual lineup of the band, doing songs you might not always hear at bigger gigs - an intimate "behind-the-scenes" peek at the Vipers' inner workings. 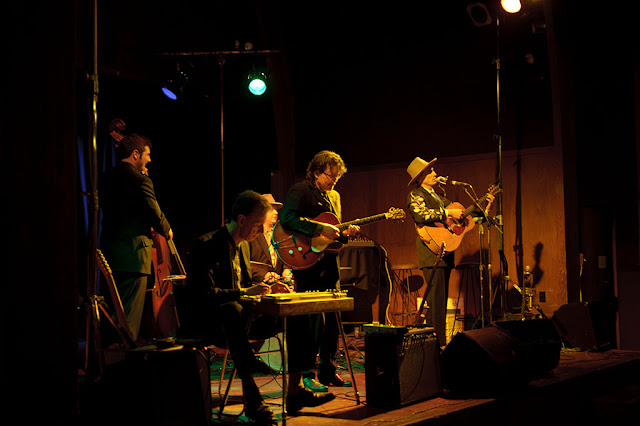 Anyhow, I got this pleasantly centred email from Petunia's phone and am presenting Petunia's communications with me more or less as he sent'em, rather than trying to format this, because why deprive you of the pleasure of his formatting?):

...so I asked Petunia some follow up questions via email. - who is in the band at present? What are the plans for the lineup? What will you be playing? Again, preserving Petunia's formatting:

The band on 20th will be;
Sky trombone and bass
Patrick elec guitar and bass
Paul drums
Me

Stephen and Jimmy will be with us throughout the spring fall as well on occasion and moving onwards at the Trocadero only when they want. Those nights will be a 7 pc band (or more), like old times. There’ll be old Vipers and new throughout.

We'll be playing new material as well as standards. Same as we did at Wise lounge. Workshop touring material for the summer. I've written a whole double album last two years of decent to pretty good songs.

Plus that - the Trocadero has a patio that will open with nice weather so I expect the Wednesdays there to turn into a real old fashioned happening like the old days.

...All of which sounds great to me. April 20th is a Wednesday, you say? Well! (Even with my weird new tongue, I think I can probably make it through a plate of souvlaki if I smear enough tzatziki on it!). See you there, maybe?

Posted by Allan MacInnis at 1:50 PM