On going to see the Red Herring collective 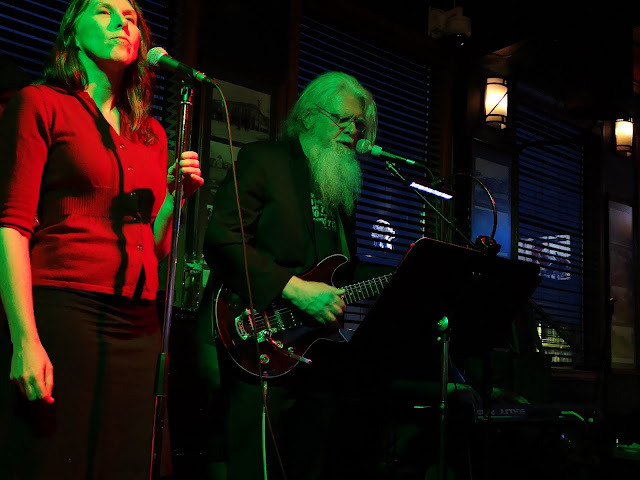 So Enrico Renz of Red Herring - interviewed by me at some length here - is a pretty great human being - smart, witty, creative, kind, and appreciative of my attentions; when he saw me sitting at the Princeton on Monday night - about three songs after I'd arrived, which was probably about three songs into their set (I got there for the still-unreleased but very moving "Consuela") - he gave me a big grin from the stage and said on-mike, "Allan MacInnis in the house!" (Kinda fun to have that happen! Gerry Hannah and Jeffrey Lewis have also acknowledged me from the stage, but it's actually not an everyday occurence). 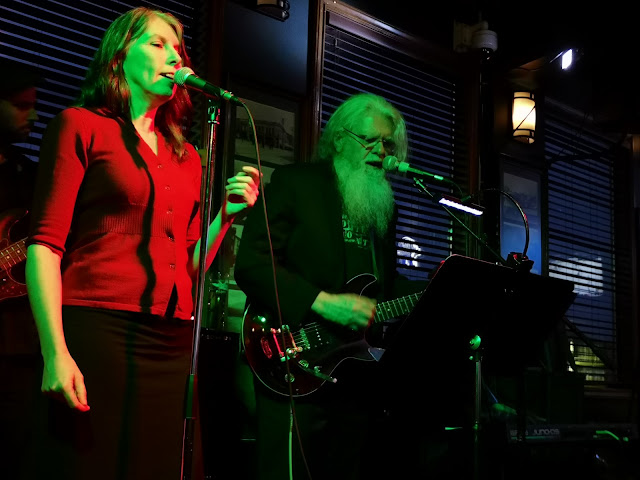 It was no surprise that Enrico was surprised to see me: I've been uncharacteristically absent from all previous Red Herring-related events this year, including a solo set Enrico did at Central City that I had connected him with. Couldn't be helped - even when I don't  technically have a lot going on right now, with my surgery recovery, weird tongue, weird wrists, and shaky emotional equilibrium, I still have a lot going on. And it's kind of a miracle that I made it out at all on Monday: it had actually been one hell of a day - I got chewed out by my GP for asking her input on something related to my recent surgery, which turned into an ugly confrontation on the phone that I could not ameliorate or extract myself from, after which she actually kinda HUNG UP on me, setting me into a whirlwind of emotions, so that when I phoned the Cancer Agency to pretty much BEG them to schedule me for counselling, which I've been waiting to hear back from them on for a couple weeks, I broke down crying, which I spent much of that night doing (also ended up on the phone with my surgical oncologist, later on, to ask the same questions in more detail that I'd tried to deal with through my GP; I hate to trouble him with smaller matters when he's working so hard to deal with more pressing things like active cases of cancer, people dying, requiring surgery, etc. Me having a hairy tongue-graft that keeps peeling doesn't seem quite on par). He doesn't really know why my tongue would be losing outer layers - it's happening for the fifth or sixth time now.  He thinks it is due to drinking liquids that are too hot, but I had thought I was being pretty careful about that; I'm letting any hot drinks I make sit for a long time before I drink them, but it still keeps happening, every three weeks or so. Also, he doesn't have any advice at all about getting laser treatments or electrolysis to remove the hair from my tongue graft. Will it be covered by my insurance? I'd have to phone them, he doesn't know, but it's probably not covered by MSP. Will the hair removal process damage my apparently-already-imperiled graft? He doesn't know. Some of his patients, he says, just cut the hair off with scissors when it gets too long... he was surprisingly gentle and patient with me, so I'm sure his secretaries told him I was in a bit of a state. Anyhow, I felt a bit better at least having someone to talk to about  it all, even if no useful answers were imparted. It's hard not to freak out a bit when pieces of you are detaching that shouldn't detach and you're growing hair where you should never HAVE hair... or to be on waitlists for help that stretch into months...

Anyhow, somehow the hell day I'd had, with various dams breaking, resolved into a forced choice between "sit around and wallow" and "say fuckit and go see Red Herring!"

I am so glad I chose the latter option. 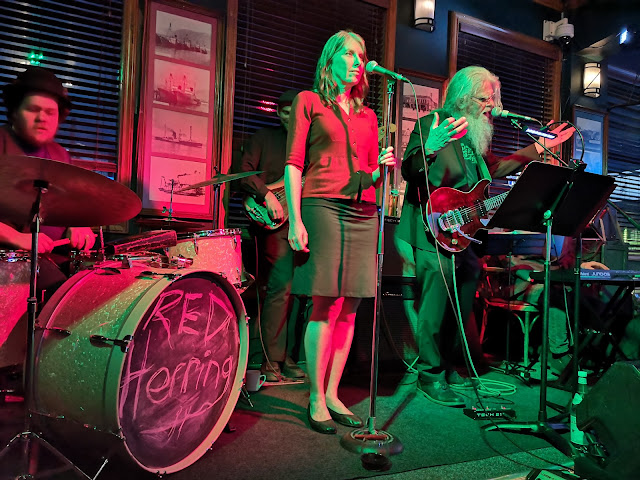 For those who don't know, Red Herring - in the form of "the Red Herring collective" - have been doing a Monday residency at the Princeton, sort of akin to those Petunia and the Vipers gigs at the WISE Hall lounge where the band worked up new songs, experimented with arrangements, and honed their delivery (which I gather Petunia is doing at the Trocadero, now, more on which later; he has a gig there on April 20th). 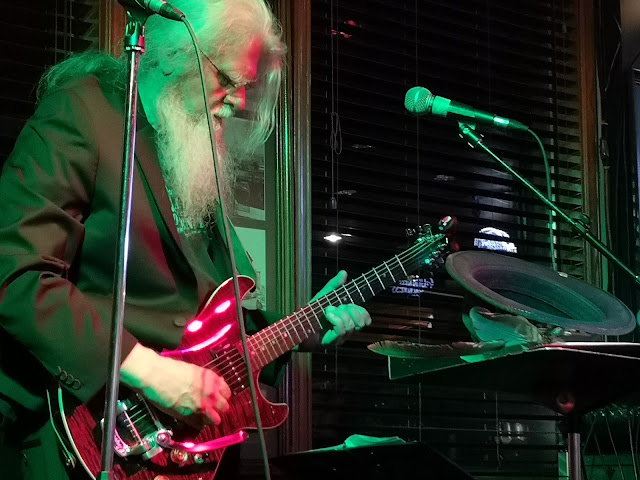 ...And as with the Vipers (who will be playing without Stephen or Jimmy!), this is an unusual lineup of Red Herring, hence the "collective" in the name; with various members facing personal issues, wanting to work on other projects, or just not able to commit to a weekly show, you never quite know who is going to be with them onstage. Last night there was only Enrico and Tania from Red Herring proper; the rhythm section - Kenan Sungur on drums and Dave Taylor on bass - had also clearly worked with the band for awhile, but keyboardist Adam Farnsworth was hearing these songs, I gather, for the first time, playing from charts, and at some point in the night, one of the other band members introduced Enrico to a trumpet player, Abner, who joined in with them never even having MET Red Herring before... 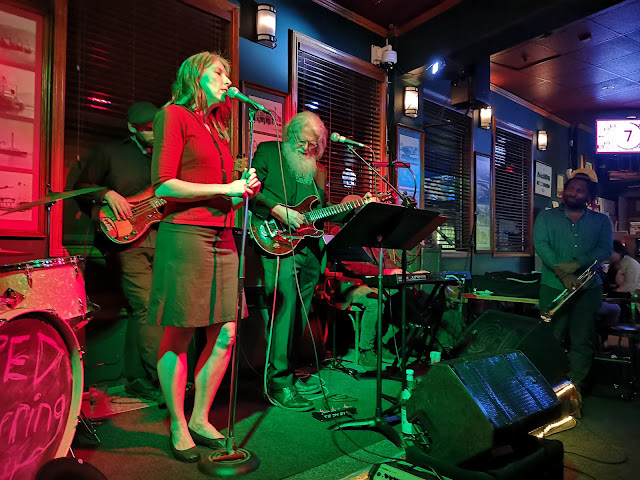 Now, I don't know about you - maybe some of my readers out there like things tight and polished and "professional" - but I personally love the excitement of seeing musicians find the groove of a song. Abner was the most interesting one to watch (in part because Adam was hidden from view from where I sat): as a song started, he'd hold the trumpet and listen intently, then after a minute or so, would try something, think about it, modify it, try something else... this with often complex songs he had never heard before, from a band he'd never met, but also presented in arrangements very different from even what Red Herring's fans have heard, like a version of their spidery, angular "Taste Tests" that got transmuted into jammy 70's fusion, maybe with a vaguely Latin funk flavour. Yet by the second verse, he almost always was playing like he'd been in the band for a few years, offering solos that fit perfectly into the mix. It was very engaging to observe. If you've ever played music, ever jammed with people - and shitty as I am at playing anything, I have done so myself, in fact, sitting in on bass and guitar with some buddies of mine - there is a real joy to feeling things WORK, to finding the groove then laying into it, expanding on it, embellishing... it's EXCITING - exciting to do, and exciting to witness, in a way that a too-slick, too-polished performance might not be. ("Too much perfection is a mistake," as Jodorowsky has a character quip in El Topo). The odd flaws, the false starts, and hesitations actually only serve to enhance the stuff that does work, all the while inviting the audience to witness something coming to life, our own discovery of the arrangements mirrored onstage. As Enrico observed afterwards, chatting outside the venue as I took my leave, it's akin to his own preference, when it comes to Renaissance painters, to see their sketches over the finished works. There's exploration and experimentation and the Thinking-About-It witnessed, all of which gets hidden in the finished, final work. 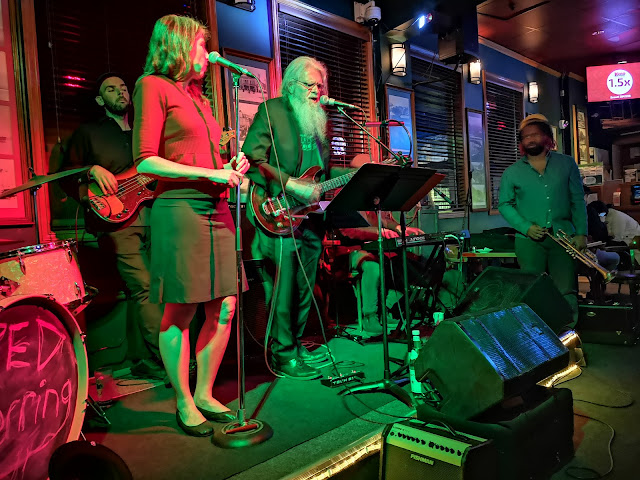 Anyhow, it was a real good time, something I sorely needed - sometimes a man needs people who are glad to see him! (I had a couple friends at the Princeton that night that I didn't expect to see, too). Video evidence is pending the band's approval - I did shoot a few clips - but meantime, note that these shows are FREE TO ATTEND, though you're encouraged to put some money in the hat and to buy beer to keep the Princeton happy. I believe there is a plan for them to continue - watch the Red Herring Collective posts on Facebook for more. You won't know ever what lineups or songs or arrangements you'll encounter, but I am confident that you'll see something fresh and real and exciting happening, whatever form it takes. Once the band gets their next album together, no doubt that there will be a more stable, more rehearsed lineup playing bigger, for-pay shows, so this is actually a really interesting chance to see unusual, never-to-be-repeated versions of some really great songs. You might even get to hear Tania on kazoo! (Her vocals are the high point to "Julia," in particular, which sounded, of all the songs they did, closest to the studio version...). 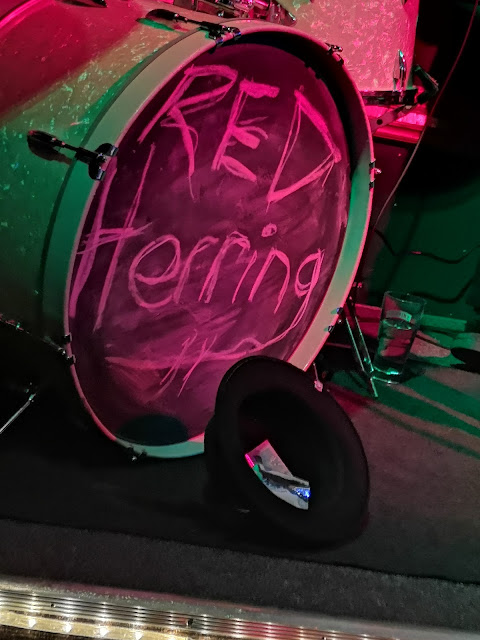 Oh, and I figured out, with the help of David M. and Google, a much, much better route to the Princeton for us out-of-town transit users; I had previously been going down Commercial Drive, mostly so I could pitstop at Audiopile and Black Dog, then making my way down to Powell, often walking a few blocks between Hastings and Powell through some fairly depressed neighbourhoods, but in fact - with apologies to Audiopile and Black Dog, I guess - I have discovered that if I get off at Nanaimo Station and catch the #7 Duncan bus, it makes an amazingly efficient, very brief zip down Nanaimo, turns left, and lets me off the next block down from the Princeton, all of which took under 45 minutes, INCLUDING THE TIME IT TAKES TO WALK TO THE SKYTRAIN. I can leave here at 7pm and be at the Princeton for 8, which is when the shows start!

I am not 100% sure if the Monday gigs will continue - but keep an eye out on Facebook. Highly recommended! 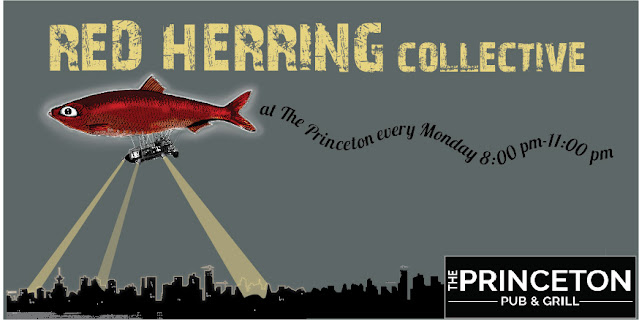 Posted by Allan MacInnis at 1:22 AM