100 Block Rock 2 - release party at the Red Gate this weekend! 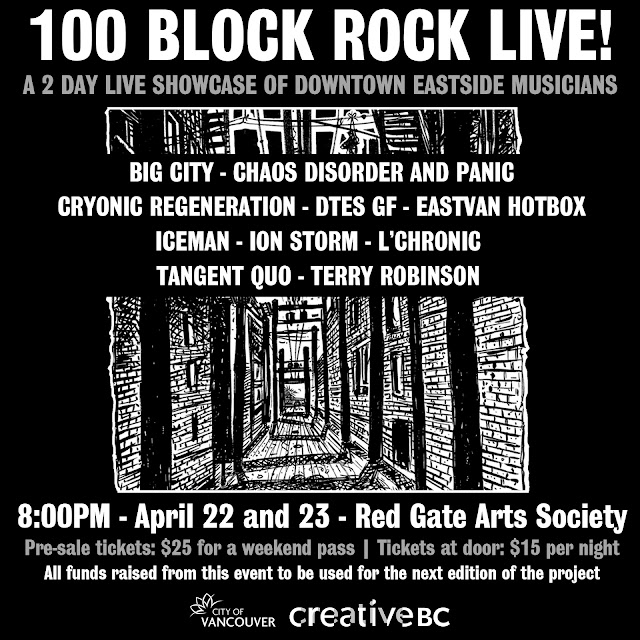 So Noelle of Chaos, Disorder and Panic (interviewed here) tells me that there's a release show Friday and Saturday at the Red Gate for 100 Block Rock 2, a limited-edition vinyl compilation of very varied music united in that it is made by residents of the downtown eastside of Vancouver. I don't know a lot of these bands, but there's some very cool things happening: it begins with what sounds like a land acknowledgement in the First Nations language of Kwak’wala, delivered by Robert Williams, who also sings a song and drums.... that's followed by a scary piece of DTES/ Whalley gangsta hip hop by East Van Hotbox (not quite as fun a bandname as East Van Halen but still very cool), in turn followed by a rappy R&B song by Technition Cardinal, a reggae-meets-avant-classical song by Ion Cardinal, and Noelle's noisy grindcore rant about the 2010 Olympics, "Homes Not Games," which has a pretty catchy little riff at its core and a fiercely convincing choral bellow of "being homeless is a crime"... Then there's a powerful folk tune from Big City, actually the nickname of an ex-con named Freddy, singing about prison (Andromeda Monk, previously mentioned in my Gentle Party article, plays on it)... which is followed by a dark, loping rock song taking in addiction and fentanyl on the DTS by Iceman; a somewhat unquantifiable avant-pop song by Tangent Quo; a rap song about addiction by D'skyz that features Elliot Langford on drums (and Andromeda again); and a blues song by Karen Colville. A couple of the artists playing the release were on the previous volume, like tuneful punk band Cryonic Regeneration,  gangsta rappers L'Chronic, a poet/ guitarist named Terry Robinson, and what is apparently a horrifyingly abrasive noise band DTES GF, who are even MORE aggro than Noelle! The sheer variety of music present is a huge part of the appeal, but also the community spirit of the project.

Not entirely sure what the deal is with the show - which artists are playing which night or when - but if you have ties to East Van or want to support a very cool community arts project or just want a night of really varied local music, this seems like a cool show to be at. Weekend passes can be purchased here, and you can find out more on the Facebook event page here!

Posted by Allan MacInnis at 5:41 PM