Jack Ketchum's Off Season vs. The Hills Have Eyes

Interviewed about the book Off Season - a 1980 survival horror novel about a family menaced by a clan of cannibal killers in Maine (!) - author Jack Ketchum notes that "Off Season had a lot of influences (though it should be said for accuracy that The Hills Have Eyes wasn’t among them – seems Craven and I were working that vein at pretty much the same time)." 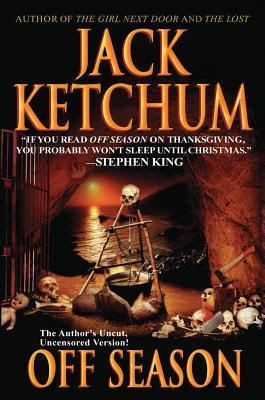 It's an interesting clarification - the only one I can find online; because there is very strong similarity between Ketchum's novel and Wes Craven's film - from the inspiration (the story of Sawney Bean) to the plot, which has a group of out of towners having members abducted,  tormented, killed and eaten by a clan of near-feral humans. Both the movie and the book have characters who escape abduction and must rise to the occasion, embrace their own savagery, and fight for their lives and the lives of their loved ones. (One character in the book observes that "Fighting for your life is a fucking ball. As long as you didn’t get slaughtered.") While there are differences - including a "police to the rescue" angle in Off Season that is absent in the film, where the protagonists are entirely on their own, and a different relationship between the characters in the book (whose familial bonds are looser - two of the women are sisters, but that's it), there is so much that the two stories have in common that it almost feels like they're the same, at times - right down to the detail of a huge man among the cannibal killers in Ketchum's book who is described as being absent all hair, including eyebrows. Hmm, does that sound at all familiar? 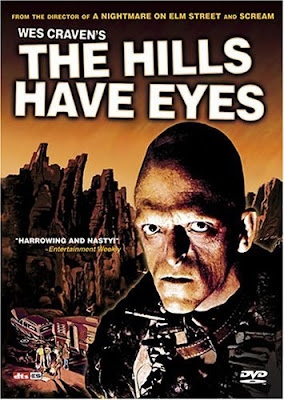 Jack Ketchum and Wes Craven, of course, are no longer with us to answer any questions all this might leave one with. I have written Michael Berryman, the "poster boy" for the film, to see if he knows whether perhaps Ketchum did, after he'd discovered The Hills Have Eyes, add at least this detail to the novel, as a tip-of-the-hat to Craven's film, but it's just a Facebook message request from a stranger, and he must get more than his share of those; I'll be surprised if he writes back. I do believe Ketchum, for the record; if he'll acknowledge, as he does, that The Texas Chainsaw Massacre was an influence - which also involves a collection of out-of-towners menaced by rural savages - he would surely also give a nod to The Hills Have Eyes, too, if it were relevant. The timelines of the two works argue in Ketchum's favour, too. The Hills Have Eyes came out in 1977, while Off Season was first published in 1980, after a lengthy struggle with Ballantyne books about the violence and gore, much of which was excised, along with various other plot changes, which Ketchum talks about in some detail in the afterword to the "uncut" edition, pictured above. And before that period of negotiations - what in film is called the "post-production" phase; not sure what the literary equivalent is - it  probably took Ketchum a couple of years to write the book. In shore, it is entirely believable that Ketchum was in the process of writing the book while Craven was in the process of making the film, and even if the film did find its way into the world before the book was published, that does not mean that Ketchum stole any of its elements.
Still, the similarities are enough that, if you're a fan of The Hills Have Eyes, the thing that's marvelous about reading Off Season in it's uncensored edition is that it, um, "fleshes out" sequences that were not just removed from the Ballantyne paperback, but had their equivalents edited out of Craven's film, too. (People are just so damn sensitive about cannibalism). In the commentary track for The Hills Have Eyes, Craven and producer Peter Locke talk about having to constantly trim down violence and gore in order to escape the initial X rating slapped on the film by the MPAA. In the scene around the campfire where Papa Jupiter is gnawing on a cooked human arm, for example, you barely get to see the arm, covered in charred flesh and flopping at the joints in very believable way - a really incredible articulated prop, which I presume they constructed for the film, but which is only glimpsed very briefly. There's no restoring the material that was lost (or it would have been done by now!), so for people who crave such strong medicine - like myself, presently fighting against awful things that have been done "for my own good" to my own body, for whom survival horror and body horror are deeply therapeutic - the loss of such scenes of explicit savagery is quite sad.
(By the by, I'm also kind of fixated on The Island of Dr. Moreau, at the moment, and actually really enjoyed the Frankenheimer director's cut - which I highly recommend, in conjunction with the Severin Lost Soul documentary, as therapy for anyone who finds themselves with hairy tongues or other bizarre, surgically-induced disfigurements. Might also be a good time for me to revisit Sssssss and Rituals too!).
But if the goriest bits of Craven's film are lost forever, that's not the case with the uncut version of Ketchum's book, where you not only get detailed descriptions of cannibalism, you get what Ketchum, in his afterword, calls "recipes"  (they're really just descriptions of how his feral humans prepare meals - stews, jerkies, and so forth). There apparently was an even more extreme manuscript that got thrown in the trash by Ketchum after the initial round of edits, but trust me, what's in the restored edition published by Dorchester in 2011 is plenty extreme enough, and amply aided by the fact that things like this are all actually quite a bit more disgusting to read than they would be to see on screen; as a fan of zombie cinema, I've long grown inured to seeing human flesh eaten, but there are certain passages in the book that are impressively stomach-churning, even for me, as when one character is described eating a "slippery pile of intestine" raw: "One hand worked its contents down, while with the other, he fed the long grey tube into his mouth and chewed" (p. 174).
There's some real black humour in the book, too, like a scene where the novel's cops discover a campfire where a human has been cooked, and the sheriff - who would have been a perfect role for the late Michael Parks, had Off Season made it to the screen - thinks to himself that what he's seeing is not burns, but barbeque. I have no idea if that line was cut from the Ballantyne edition, but I'm enjoying the restored version enough that I might just pick up the 1980 version, if I ever see it around, for the sake of comparison.
If you, like me, are going through a bit of an ordeal of late - of if you've wondered what a completely uncut version of the 1977 The Hills Have Eyes might play like - you might want to check this book out, too. Best horror novel I've read in years. Wish I'd read it back when Jack Ketchum was still with us, so I could express my appreciation! RIP, Jack. RIP, Wes. Thanks for the medicine - it helps.
Posted by Allan MacInnis at 11:57 AM