Gigs and life and stuff 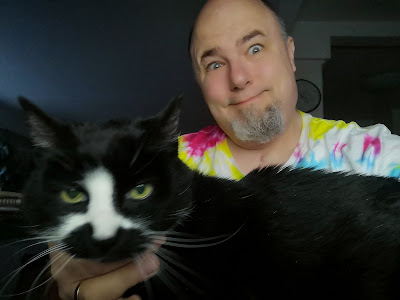 As of this spring, the cat's new favourite place to visit me is in-between me and the keyboard. I am spending more time here lately, at the nice new desk setup Erika engineered for me during my stay in hospital, than I am on the couch watchin' movies, so instead of getting pats there, he comes to get them (and lobby for treats) here. I will be deep in a piece of writing when I hear him leap onto the chair on the far side of the table; I will hunch over to get a few more sentences in as hear the clack of his claws (if Erika hasn't trimmed them) across the tabletop as he makes his way towards me (occasionally wiping out on the unstable borders of my incomplete We're Only In It for the Money jigsaw puzzle and sending pieces of it scattering). Once upon the desk, he then either steps down onto my lap, where I sit in my office chair, or more often poses himself to indicate his interest in BEING on my lap, which I then facilitate with a gentle lift-and-placement. We hang out for a few minutes, thus, and after petting him for a bit, I try to type around him - which is easier to do when he is on my lap, as opposed to standing on the keyboard, which is what he was doing previously and began the lap-placements. He seems to have come to enjoy them, so that they have become a thing unto themselves, and not just a reminder that I haven't given him a cookie in a while.

Anyhow - I write as much as I can under the circumstances. I am a bit overextended on projects, overwhelmed by show options, and back to being afraid of COVID a bit. Also finally getting to talk to people - counsellors, physiotherapists, vocational rehab therapists, an SLP and others - about my recovery from my surgery, still ongoing, and trying to keep up with the things they tell me I should do to prepare for an eventual return to work (not sure what form that will take).

Oh, and I'm broke (not in a bad way, don't worry, just in a run-of-the-mill I-shouldn't-spend-anything-I-don't-need-to kinda way). So going to gigs where I feel I hafta pay for the space I occupy with a meal or a beverage or such - it's not so exciting; I would rather stay home, eat a home-cooked meal (because that's much nicer for my weird tongue, being able to control the elements I put in my mouth) and watch a movie with Erika on the couch. In fact, we're havin' some great homebody nights lately. Revisited Brad Anderson's fun Poe adaptation, Stonehearst Asylum, last night, and Scott Derrickson's scary, disturbing Sinister the night before, and we totally enjoyed ourselves. (Though Sinister was a bit much for Erika, horror-wise, and the endings of both films get a bit cute for me - I don't care for a cute ending, the kind that winks knowingly at you to declare the film is over - as with Sinister - or that deliberately ends on a celebratory high to leave audiences feeling good after a harrowing film, as with Stonehearst Asylum. But they're both very enjoyable films, overall). Also tried V/H/S/94, and am glad to see that the franchise has found its feet again after the mostly-not-so-great V/H/S/Viral. I had some misgivings about the film - mostly a framing narrative that is nowhere as effective as the ones from the first two films - but the segments I've seen so far - and especially Timo Tjahjanto's one - have been pretty great.

But I still feel connected to the music scene, still want to support it where I can, and will thus mention a couple of gigs I have no intention of going to (and one I definitely will be at).

Gigs I will not be at over the next while include Beau Wheeler at LanaLou's, tonight and Orchard Pinkish at Central City, tomorrow. I wish you both well, Beau and Orchard! Other people should go.

Jumping ahead a week, nor will I make it to Ford Pier's Central City gig on May 6th, having other obligations that night. I may write something about it. His most recent album of new material, Gormful in Maya, has proved very rewarding and has supplanted Huzzah! as the Ford Pier album I am most likely to listen to when I am in the mood for Ford Pier, which mood I find myself in quite often lately. I had really wanted to see Ford, to at least once in my life have seen him headlining a show, instead of opening (as I have seen him do for Nomeansno, Mike Watt, Art Bergmann, Bob Mould, and maybe a few others).

Unlike these shows, I will be at David M.'s gig on Saturday, note. He tells me he is adding a NO FUN song to his setlist that no one ever would dream of requesting, but he will not tell me what it is, or what places it beyond the pale. I cannot begin to guess. (Actually I have a guess but it led me down a horrible colonial rabbithole taking in cannibalism, scalping, and other horrors and I am just deleting that stuff, because... well...).

Of course, speaking of Central City, Pete Campbell (Pink Steel, Wardells, Sweaters, Coach StrobCam) will likely also be at Central City, upgraded from Tambourine Pete to Guitar Pete. Perhaps he will do an original for us? Fans should note that video Pete himself had never seen, of the Sweaters performing at the Horseshoe in Toronto, was unearthed from Youtube by the intrepid diggings of one Doug Smith. My fave Sweaters song, "Hockey Sucks," starts around the 20 minute mark. Pete sure looks taller in this video than he does in real life. And younger!

There are a couple of other gigs that I have not fully ruled out, though they are regular stands, for the time being, so which week I go is open to question. I might return to the Red Herring Collective some Monday or check out Petunia and the Vipers on a Wednesday. I have written about both, previously.

This will have to do for now.

Posted by Allan MacInnis at 7:16 AM

Pete can't be there!