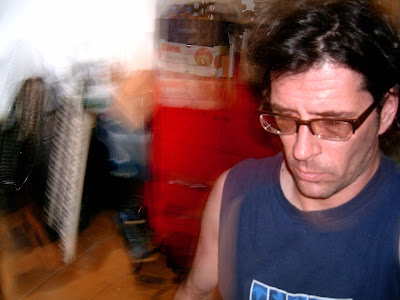 Photo by Jen Morris,  not to be reused without permission!

This is very sad news. I have been informed by email from friends of Zev Asher's that he died recently (earlier today, I believe), at the age of 50. Obituary and funeral details are here.

Zev was the first real interview I gave, for the final issue of Terminal City, to promote a screening of his at the Cinemuerte festival in 2005 (that interview is on my blog here). We finally met in 2011, when he came to Vancouver for a noise event and screening of his film, Subcultural Revolution: Shanghai, at my invite, and we did a big interview at that time, which has been pending publication; the idea was to publish it to correspond with a planned DVD release of some of his films. He had been battling cancer for some time at that point, and was recuperating, but when last I heard from him, in November of last year, he had anemia and was not doing so well. It seemed to be a back-and-forth battle, dragged out over a long period; but when emails I sent began bouncing back a few months ago, I began to suspect something was wrong.

I was not close to him, but I greatly enjoyed the afternoon we spent in Vancouver, talking about his days in Nimrod and sharing our experiences of Japan. We walked around the downtown eastside and visited Scratch Records, his former label, which still existed back then (Keith Parry's touching and funny obituary of him is online here). After he left, I enjoyed his correspondence; the last email he sent, he pointed out that Jim Carrey had appeared in the Dirty Harry movie The Dead Pool. This I did not know.

If anyone has pictures of Zev onstage or with Nimrod that they would like to see used to illustrate an article on him, sometime this summer, I'll be putting a big one into the world, based on our interview, in Zev's memory. As I say, I did not know the man well, but I liked him, and value both his music and his films. See his website or his Youtube channel for more information about (and examples of) his work. Rest in peace, Zev; my condolences to those who knew you.
Posted by Allan MacInnis at 10:24 PM