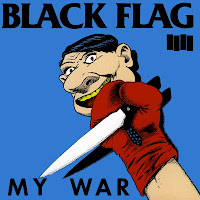 Doing some comparisons on Youtube. Here's a full FLAG set (note: an awesome version of "My War" begins at 9:45). Bill Stevenson's drumming really stands out here - he's still pretty amazing, and the band in general sound lean and mean and hungry. FLAG profits from having two guitarists, too; they really make the most out of some very brief, fast, simple songs. Then there's a full set from Black Flag, here - a much longer show, but with video and audio a bit rougher, alas. It's a little hard to tell with the audio the way it is, but it sounds like the new drummer's got nothing on Stevenson, and the songs sprawl a bit - see in particular Greg Ginn's solo in the middle of  their new song, "The Chase," starting around 8:30; the song borders on falling apart, can barely contain his tendency to spazz out. Still, the overall energy is dark and menacing and credible, and leans towards the new (it would be hard to imagine FLAG writing new songs and still being FLAG; good as they are, they're a cover band, right?). The bassist kind of disappears, as bassists are wont to do. The big difference lies in Ron Reyes; I think I like his vocals better than either Keith's or Dez's, and I definitely like his stage presence, stalking like a panther, menacing. A cool version of "Can't Decide" starts around 46:50, which accomodates Ginn's style much better. (Attentive readers will be able to guess what my favourite Black Flag album is).

Both bands sound pretty good to me, actually...
Posted by Allan MacInnis at 12:36 PM