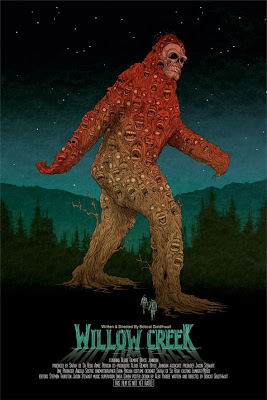 It's high time for a serious, well-made cryptozoology movie. The whole concept of bigfoot, in particular, is sorely in need of a reboot and re-branding, lest the Sasquatch become nothing more than the stuff of stoner comedies, unseen Z-quality horror movies, and beer commercials - dismissive and superior, tacky and tasteless, or just plain silly. Whether bigfoot exists or not, children growing up without a local woodland monster to enhance their senses of wonder, awe, dread and curiosity - growing up in a world with Santa and the Easter Bunny, but no believable bigfoot - are growing up impoverished, deprived, cheated. Bigfoot belongs on the big screen, in a scary, sincere movie made by someone with the talent to do the story justice and a healthy respect for the mythos, regardless of whether they buy into it themselves...

Happy as I am, given these feelings, to hear about Willow Creek, I was not expecting that Bobcat Goldthwait would be the man to take up the cause, frankly. The trailer for this new, non-comedic found-footage bigfoot movie, and the poster, have appeared online recently. The poster is better than the trailer, which makes the film seem a bit too Blair-Witchy (and doesn't seem to do justice to the film's documentary elements), but still, I'm definitely curious (this review seems pretty positive, though I'm reluctant to read more about the film than I already have, since I already know I need to see it. Noted Ufologist Nick Redfern also gives it a thumbs up on Cryptomundo). It helps that I've liked every single Bobcat Goldthwait film I've seen (now at three: World's Greatest Dad - which I liked better on second viewing than first; Sleeping Dogs Lie, which no one nowhere should watch with their mother; and the rather terrific God Bless America). No word of a Vancouver screening as yet. Maybe it'll make it to the VIFF?

Note: there is a helpful, but not exhaustive, IMDB list of bigfoot movies here, in case you're wondering about Willow Creek's competition. You will note that, Harry and the Hendersons aside, not many of the films on it are widely known, nor do many seem that promising. As far as I can recall, in fact, the best bigfoot film I've seen to date is The Creature From Black Lake, if only because it boasts great performances from Dennis Fimple, Dub Taylor and Jack Elam. The competition is slight enough that Bobcat might just have made the best bigfoot movie ever...

EDITED TO ADD: oh BOY do I want a Squatchit. Somebody give these guys some money for me, okay?
Posted by Allan MacInnis at 11:32 PM