Of extended technique, plus Darren Williams and Francois Houle at the Kozmik Zoo, Monday 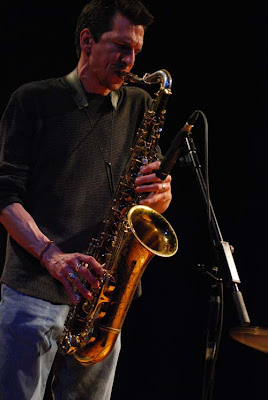 Darren Williams by Femke van Delft, not to be reused without permission

A confession: when it comes to reed instruments, I'm not at all clear how extended technique works. Listen to THIS, for instance - start with the first track, off Darren Williams' new solo album, Reed. I know that there's a trick as to how he can continuously play for long stretches - that he's actually inhaling and exhaling at the same time, which allows for the seemingly limitless playing you hear. (I want to call it "breathless" playing but obviously breath is involved, it just appears to be one long endless breath, unlike the normal human inhalation/ exhalation thing). But my understanding is a matter of merely understanding the words; I have no actual grasp of how to do what he's doing, no physical sense of it, and I have lots of questions, like:

a) How long exactly can he keep this manner of playing up? It seems to so transcend normal human limitations as to appear infinite, but surely he needs to stop and inhale sometime, no?

b) Are there health consequences of playing this way? My recollection of seeing Francois Houle and Evan Parker do this sort of thing is that they get a bit red-faced and puffy-cheeked, so is it actually, um, dangerous to do? Can something, um, burst?

e) Does playing this way have other limitations? Can he only play "so hard" when he's working on inhaling while he exhales? Does it require massive amounts of exertion or concentration, or does it get easy after time?

f) Is this something *anyone* with the right amount of training can do, or is does it require some particular genetic profile or body type or...?

Darren Williams (saxophone) and Francois Houle (clarinet) are playing the Kozmik Zoo this Monday. Both are masters of extended technique; Houle, in fact, is one of Williams' teachers. Perhaps some answers can be found by attending... 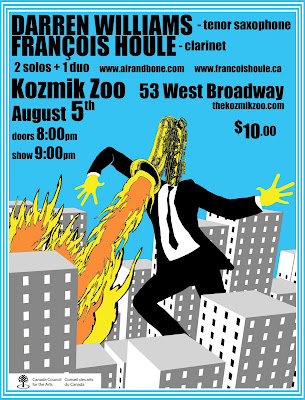 It's called circular breathing, where the musician puffs their cheeks, and then pushes the air out of them while inhaling through the nose to keep a continuous sound. It's quite difficult, but a lot of wind players can do it. There is a limit to how long it can be kept up, but it's more due to control of the cheeks than lack of oxygen. Evan Parker is probably the best example of someone who regularly circular breathes for a really long time.