A bar of chocolate for Lizabeth Scott: on The Cinematheque's film noir series 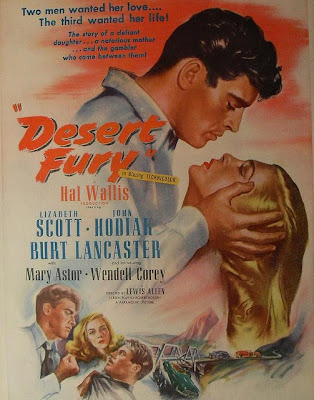 I mailed a bar of chocolate to a 90-year old woman the other week. I've never met her, and have no connection with her - except that I hoped to interview her, and figured that at the very least a bar of chocolate might entice her - if she's anything like my 82 year old Mom - to open a letter she might otherwise ignore. Of course, if she has a rational mistrust for people, she'll simply throw away the chocolate without eating it - I sure would! - but that didn't stop me from buying a good brand of organic chocolate, so at least the expense of the gesture might count in my favour, assuming the mail service didn't confiscate it en route. I mean, who knows what the rules on mailing chocolate are? 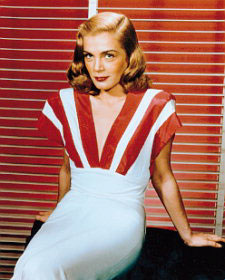 The woman in question is named Lizabeth Scott. She is best remembered as a film noir femme fatale in the 1940's and 1950's; I hoped to interview her about her role in the 1948 film Desert Fury, upcoming at the Cinematheque (August 13th, 17th, and 18th) as part of their summer noir series, this year conceived as a tribute to her co-star in that film, Burt Lancaster. I knew I had no chance of getting a feature on the film series in any paper without some sort of interview at its base, and Lizabeth Scott, along with Joan Fontaine, is on a very short list of people involved in the films in question who are actually still alive. This, it turns out, is not the most interesting thing about Lizabeth Scott, but it sure seemed a good place to start; and after reading a bit of her life story online, I knew she was the person I wanted to speak to. I mailed no such chocolate to Joan Fontaine (age 95). 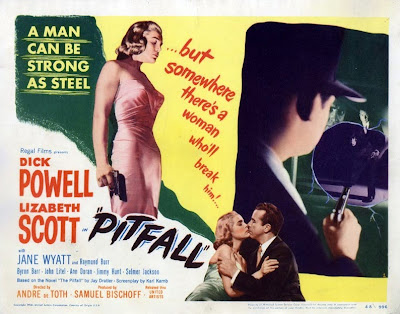 The role in Desert Fury is, I gather, atypical for Lizabeth Scott: while she was typed as a "budget Bacall," and most frequently played a seductress who lures men into danger - such as in, say, Pitfall, with Dick Powell and Raymond Burr, or Dead Reckoning, with Humphrey Bogart, below -  in Desert Fury, she plays a spunky, fiery, rebellious and reckless, but nonetheless rather innocent young woman with nothing dark or dangerous about her. At the start of the film, she returns to her hometown in the deserts of Nevada, rekindles a feud with her controlling, gambling-hall-owning mother (Mary Astor), and, determined to prove her independence, strikes up a relationship with precisely the sort of man her mother would disapprove of: a gambler with criminal connections and a shady past, who, even worse, is her mother's former lover (!), and who, worse still, is attracted to Scott for questionable reasons (she reminds him of his dead wife, who perished years earlier in what is said to have been a car accident, but...). 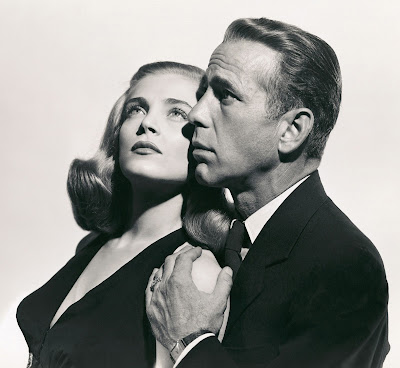 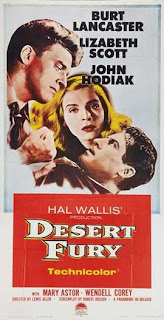 Desert Fury is a fun movie, and, as a rare Technicolour noir, has a quality of lush Sirkian melodrama to it - but it's also a bit nuts: the dialogue - from a screenplay written by the later director of The Hustler, Robert Rossen - is delivered at a feverish clip, and the characters have rather convoluted back stories that the film takes its time explicating, so you find yourself a bit lost at times. While I don't want to call these characters "perverse," lest I seem judgmental, their relationships and the quirks that drive them are by no means simple. (Burt's role, by the way, is the man hand-picked by Mary Astor to marry Lizabeth and get her away from bad influences, except Lancaster really does have a thing for Scott and is pissed off that Astor is interfering. How dare she! ...Plus he happens to be a cop who investigated the car accident in question). At one point I found myself wondering - though it wouldn't have worked logically - if Scott's love interest, the gambler (played by John Hodiak) would be revealed by some odd twist to be her father, even though he's not that much older than her; it's that sort of film. Even though the film doesn't go there, Scott's character's motivations in hooking up with her mother's former lover are at least somewhat piquant. Richer yet, there's a glaringly queer subtext to the relationship between Hodiak and his pal/ henchman, played by Wendell Corey (in his first film role, pictured below on the right, beside Hodiak). Corey is openly jealous of Hodiak's relationship with Scott and tries to break it up, because he figures that no woman is going to come between him and his, um, mate. (I forget if the film has them having served time together, but I would in no way be surprised...). 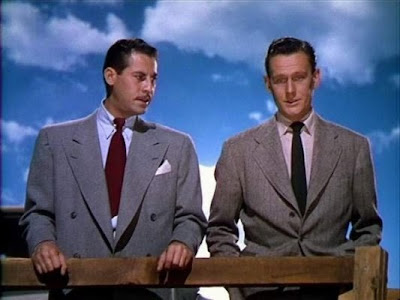 This brings us to why I really wanted to interview Lizabeth Scott: because she herself was/ is apparently a lesbian, whose career was shortened by the scandal that ensued when Confidential magazine outed her, and made unsavoury allegations about the company she kept (they claimed that she was consorting with prostitutes, essentially). She tried to sue them, but it was dropped on a technicality. Scott only made a handful of films after that, recorded one album of torch songs, and then more-or-less disappeared from the limelight; her last film was in 1972 (you can read more on all that here - a very informative article). Though she occasionally grants interviews to film noir enthusiasts - there are even some from the mid-1990's on Youtube - she has, apparently, never spoken publicly about the Confidential scandal, never outed herself, has kept her private life private. 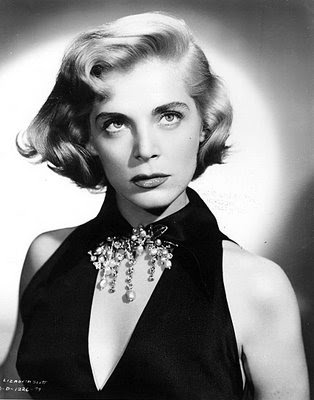 That's all fine by me - but since there are dozens of people already claiming her as a lesbian online, like my fellow blogger Cranky Lesbian, say, it's not like there's anything much to preserve, privacy-wise; there may even be misunderstandings to clear up (since who knows what Confidential got wrong). Plus, hell, imagine someone publicly coming out of the closet at 90 years old! I'd be fascinated to hear the stories and insights she might have about being queer in Hollywood in the 1940s and 50's, about the ripples caused by the Confidential article, and what it did to her personal relationships - who stood by her, who didn't... Curious, too, why she thinks it was possible for various gay male actors (like Rock Hudson) to remain employed, with their sexuality standing as an open secret, while her own career was more or less sunk. Imagine, too, the perspective she might have on developments in western culture, since then: what would she think of gay marriage, of publicly "out" lesbian celebrities like Ellen Degeneres, or more circumspect ones like Jodie Foster? Does she ever get fan mail from young female lesbians who want to know about her life? I mean, I don't know what she might have to say, but I'd be most curious to hear... 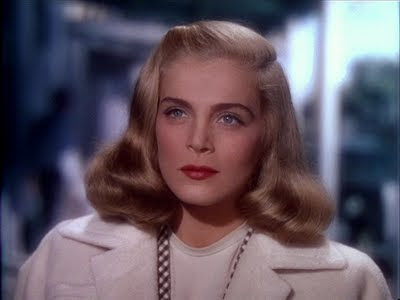 Anyhow, it looks like the interview is not going to happen, but gee, it could have been an interesting one! Ms. Scott surely has received my chocolate by now, but I have not heard back from her, and if I do, it certainly won't be in time to write an article to promote Desert Fury. I knew it was a long shot all along... 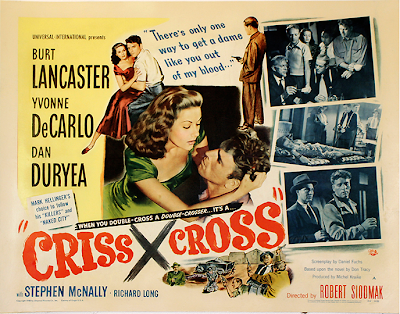 By the way, Desert Fury is a fun film which you should all go to see. Of the films that I've seen in the series, so too are The Big Sleep, which some of you may not realize inspires much of the arcane plotting of the Coen's The Big Lebowski; The Big Combo - an organized crime thriller with excellent turns by Richard Conte and a young Lee van Cleef, and, if I can trust an interview I read with the director (Joseph H. Lewis, of Gun Crazy fame), one of the first suggestions of cunnilingus in a Hollywood film (it's been awhile since I've seen it but surely I can take his word for it - that revelation appears in Peter Bogdanovich's Who The Devil Made It?, by the way). Also great are at least two of the Burt Lancaster films featured: Criss Cross is an armoured car heist movie, co-starring Point Grey's Yvonne De Carlo, that was later remade by Stephen Soderbergh as The Underneath; while The Killers adapts a famous Hemingway short story (but does not star Lee Marvin and John Cassavetes; that's a different version of the story). I have not yet seen Kiss The Blood Off My Hands, with Lancaster and Fontaine, but with a title like that, how can you go wrong?

Of the remainder of the films, there are a few others I have not yet seen, I confess - including Force of Evil, which I'm particularly keen to check out, since Bertrand Tavernier likened Harvey Keitel to its star John Garfield in an interview I did last year. It's the film this year most likely to get me to drag my ass out of the suburbs... I've seen far too few John Garfield films... 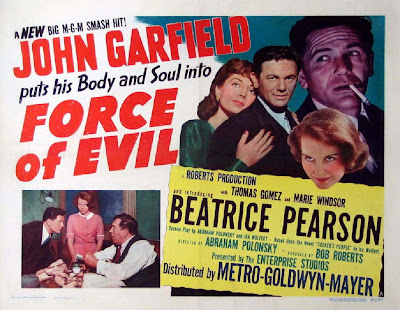 There are also a couple films in the noir program, I admit, that I am not a huge fan of. There's brilliant stuff in Sorry, Wrong Number - including great performances from Barbara Stanwyck, whom I adore, and Burt Lancaster, and Wendell Corey again... but it also has a bit of a goofy plot structure, too obviously sourced from a radio play, and it didn't seem to tie all its loose ends up as neatly as I would have liked (maybe I wasn't paying close enough attention). Also, I have long since given up trying to appreciate Orson Welles' Touch of Evil; it has moments of obvious greatness throughout, in the photography and the performances and so forth - though Welles played a much better Mexican, in the under-appreciated spaghetti western Tepepa, than Charlton Heston does in Welles' film - but the whole thing is bloated and ungainly and devoid of any real tension or narrative elegance; I've now sat through it five times, including a theatrical screening of the restored version at the Vancity Theatre a few years ago, waiting to be overwhelmed with the revelation that it's a masterpiece. I've given up; I'm simply never going to love this film like I feel I'm "supposed" to, no matter how amazing that opening shot is. 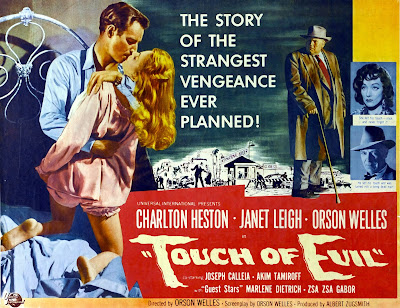 Overall, it's a great program of films, though. And who doesn't like Burt Lancaster? People who enjoy him,  Lizabeth Scott, and Wendell Corey in Desert Fury might want to find a way to see I Walk Alone, another Hal Wallis' production that has all three of them in it, but adds a cruel, cold Kirk Douglas as a nightclub owner who has screwed Lancaster over... I don't think that one has played The Cinematheque's noir series in the last couple of years, though I could be wrong... 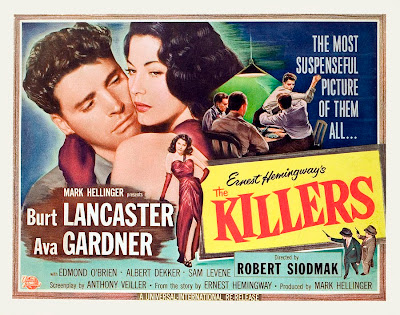 PS: Ms. Scott, if you're reading this, I'm sure I can still get something in print even if it's not in time for the Desert Fury screening. Maybe we could celebrate your 91st birthday this September with a feature? ...By the by, did you figure out why I got you a bar of dark chocolate? It had nothing to do with any assumptions I made about your taste in sweets, and everything to do with the French translation on the label... Seeing the word "noir" there, what else could I possibly have gotten you?
Posted by Allan MacInnis at 12:27 AM