Jerking Off to Comic Books (for Robin Bougie) 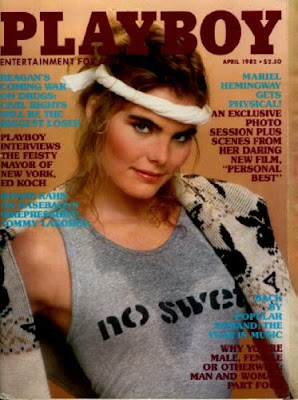 Before I got up the guts to buy that first ever stroke mag, tho', I had to make do with what was, so to speak, at hand. Often that meant late night TV, when my parents were out or asleep, when you could sometimes catch late night screenings of Emmanuelle or The Vampire Lovers or other racy fare on Canadian channels. When I finally got a TV in my room, I could stay up late on weekends getting all sweaty-palmed as I channel surfed with an erection. A glimpse of tit on the French channel? The 20 Minute Workout? The Solid Gold Dancers? 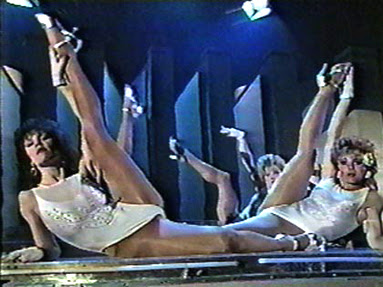 I jacked off to all of these things and more, sometimes sitting for hours, changing channels, hoping to stumble across something that stimulated me. In fact, I was exposed to some pretty great culture through that very quest for wank material - that was how I first got curious about Zabriskie Point, when I saw the hippie lovemaking scene on the late late show, though I don't think I actually got off on it at the time. I believe I stopped and thought - "hey, that looks pretty interesting, but it's not actually sexy." Followed maybe by, "Jeezus, I think I just saw some guy's balls on TV! What the hell IS this movie, anyway...?" 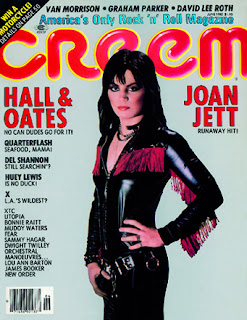 Jerking off to TV wasn't always practical, however - particularly since masturbation felt so much safer behind a locked bathroom door, especially when the parents were home or awake. You couldn't bring the TV in there with you, but you could easily sneak in the Sears catalogue, for the bra section, say. I'm pretty sure I read my first issue of Creem in the bathroom a few times, too, for that photo of Joan Jett walking on the beach in a red top that hugged and complimented her breasts. There was a book on science fiction movies that I remember liking for a nudie shot of Valerie Perrine, in the film Slaughterhouse Five, and a movie mag that had an honest-to-god centrefold of a skimpily clad Caroline Munro. Of course, this has made its way online: 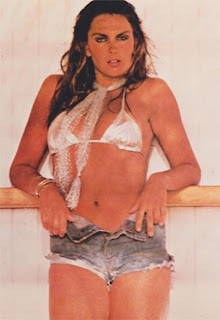 And yes, in those pre-porn years, I would occasionally get off to comic books: because no matter how racy the subject matter in some of the comics I bought, it took a fair bit for anyone to object to a kid buying a comic - at least until my father took the time to read an issue of Commies From Mars that I bought at The Comic Shop, during my underground comic years, which came a bit later. He wasn't a big Greg Irons fan, I guess: he made me get rid of it and forbade any more Commies From Mars in his household. But I wasn't jerking off to Commies From Mars, anyhow - and it was the rude political content he found objectionable, not the sexual stuff, as I recall... 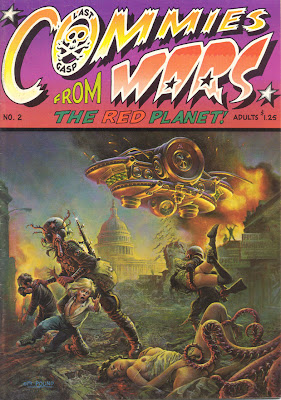 No, no, folks: for stroke material, I would go crazy on Vampirella, and Heavy Metal, and 1984, and... well, whatever else I could find that was sexy. Warren magazines often had the odd sexually themed story, or suggestive panel, or glimpse of comic book nudity. Those were the years, understand, when I could brush up against a table at the right level and my dick would suddenly get hard; when frickin' tables can give you an erection, a magazine cover like this can all but make you stain your underwear: 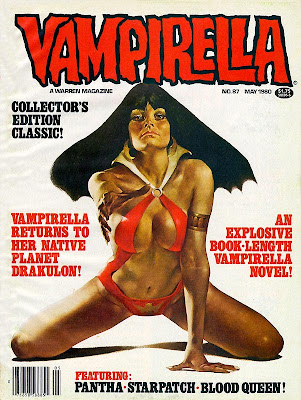 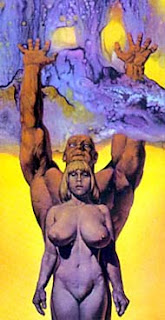 If there was ever any single comic artist who knew where I was, erm, coming from, sexually, as a teenaged boy, it was Richard Corben. I would hate to guess the number of times I jerked off to images in his Den series, in Heavy Metal - sadly turned into the stuff of comedy in the film adaptation, with John Candy giving Den the voice and thought processes of an adolescent male, but played pretty much straight up as a heroic sex fantasy in the magazine. It would have to be in the hundreds, at least. I really, really liked the way Corben depicted the heft and curve of the female breast, and I enjoyed his hyper-real arbrushed art style... and I did read the stories, too! I don't have as much nostalgia for my masturbatory teenaged self as I do other aspects of my life - I would bet Cinema Sewer's Robin Bougie, by comparison, has a whole closetful of stroke material from his younger years - but I actually bought an old back issue of Eerie magazine based on my fond recollection of the Richard Corben cover art (and the story therein which it illustrates). I know that magazine is one I masturbated to, back in the day - and not just for the cover, though it's pretty remarkable, innit? 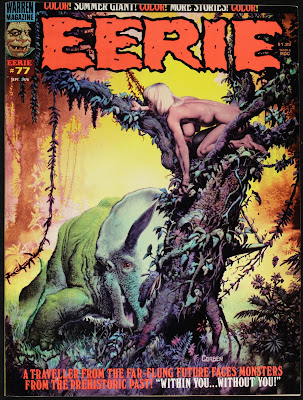 Thinking on it, you can't get a more perfect illustration of the transition from boyhood to manhood - from dinosaurs to naked women - than that cover, really; and what better metaphor for the teenaged penis than a reptilian, lustful horn, pointed savagely at the female of the species?

I would hate to think what 13 year olds jerk off to nowadays. I'm sure any adults who make art like the above, in magazines aimed at young people, would be viewed most suspiciously in the current climate - and rightly so, perhaps - but I haven't cracked the cover on an actual contemporary kid-oriented comic book in a long time; God knows what's in them now. I suspect that comics and other print publications that kids can get their hands on are far more regulated than they were during my pre-porn heyday (1980-1982). Also, they likely have less incentive to try to pitch themselves at horny youths, since kids today can doubtlessly find anything they want by way of stimulation online and don't need comics for their sexual content. (I bet the Sears catalogue doesn't get snuck into the bathroom very much these days, either). Besides, for those without access to the internet, there's a whole new class of magazine - from swimsuit issues to Maxim - that didn't exist when I was young. My masturbating to comic books at age 12 and 13 was a matter of deprivation, of making due, of being hungry for sexual stimuli and not having any other easy access to it; it was the equivalent of guys having sex with other guys in prison, because there weren't any women around (except, in my case, real ones, who were terrifying and mysterious and not at all interested in weird chubby kids like me). 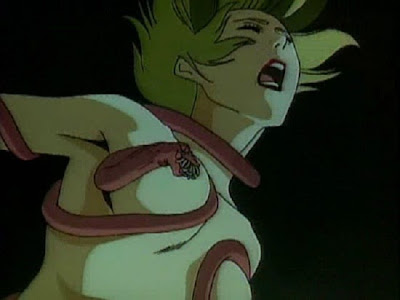 This brings us to the point of the article. 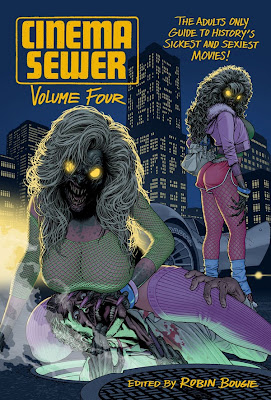 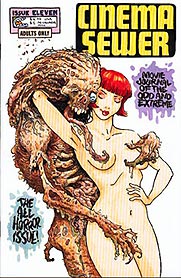 True to that, the stuff I read first when I pick up a Cinema Sewer anthology is usually the stuff that deals with straightforward, non-pornographic cinema. Robin has articles in the current anthology on film noir, for instance - including his description of Panic in the Streets, an excellent Jack Palance/ Richard Widmark movie that he himself turned me onto at the Videomatica rental store some years ago (thanks, man!). He has another piece in defense of Brian DePalma, whom I also admire (though why Bougie rejects Redacted and ignores Casualties of War, Snake Eyes, and Hi, Mom - three of DePalma's finest!- is beyond me). He has a page on "Crazy Hong Kong Subtitles" that he's compiled that is filled with fun (including lines like "How can you use my intestines as a gift?" and "We cops. Have no time for farts" - taken from films I have never heard of, let alone seen). This is all very enjoyable reading, and well within my frame of reference and comfort.

On the other hand, his 2007 article on "The Public Sex of Sonan," about a Japanese teen who gets off on having sex in grocery stores and such, simply doesn't speak to me the way the other content does (though now that I've flipped through the book looking for an example of something I normally wouldn't read til last, suddenly I want to read that article... And I'm keen to read "Ted Bundy: Porn Made Me Do It," having just watched the compelling serial killer movie Riverman, with Cary Elwes as Bundy and Bruce Greenwood as a detective who interviewed him...)

Two things really struck me in flipping through the book, however. First, in regards all the drawings of masturbating nuns, Jesus with a giant erection, countless girls performing fellatio, a girl (on page 149) on her hands and knees, spreading open her asshole with both hands... this stuff is actually pretty healthy, I think. It doesn't make sense, given how normal and ubiquitous sex is, that we repress so much of it - that there is so much hypocrisy, so much dishonesty, so much confusion and obfuscation when it comes to communicating about sex in our culture. That girl spreads her asshole, and I think, "right on!" Even the illustration on page 93, capturing a scene from a Latin American film in which a woman is being forced to perform oral sex at gunpoint... while I find the idea objectionable, don't want to see the film, don't find the image arousing, and feel no impulse to produce such images myself - as a cartoon, it doesn't really bother me; and it seems valuable that Bougie doesn't restrain himself from representing such images. I think I'd rather live in a culture where representations of sex and sexuality, even in extreme forms, flourished aboveground and in the arena of public discourse, than in one where it was repressed and shamed and forced underground; that's where the real sickness starts, when shame and guilt and fear and confusion and the inability to communicate openly about ones thoughts, desires, feelings - however weird! - make people turn to perverse and private and often antisocial means of gratifying themselves - or where shame and repression lead to hatred and the desire to strike back... I see absolutely nothing of that in Bougie's work, even at its weirdest, and see far more grim a threat in the idea of government censorship than I do in the obsessive drawings of some horny nutcase with a pencil (I mean that in a good way, Bougie, really I do).

At least, not any more. Posted by Allan MacInnis at 2:14 AM

Anyhow, sorry if the above didn't amuse you, but you're under no obligation to read what I write, about any topic... and while we're trading helpful advice, perhaps you might want to reconsider making anonymous criticisms of people on the internet? It isn't very becoming or brave-seeming, this sniping from hiding. I hope you have more productive ways to assert yourself in the world...