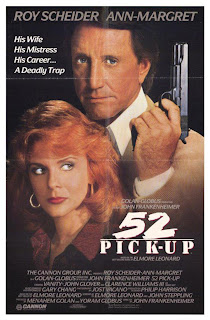 I read one Elmore Leonard novel: 52 Pick Up, after enjoying the film adaptation (at the time - haven't looked at it in awhile). I liked the book - it was a lean and mean and somewhat nasty crime novel, which I don't remember all that well.

I liked Tarantino's Jackie Brown, too - his best film, in my opinion, and based on Leonard's Rum Punch, though I haven't read it. Oh, and Killshot had some interesting stuff going for it... including Mickey Rourke, with his "late period face," as a Metis assassin!

I liked that Leonard introduces the music of Marvin Pontiac into one of his later novels, too.

No other real feelings about Elmore Leonard - I'm not a Get Shorty fan, don't really know Leonard's other work - but it seems appropriate to mark his passing somehow...!
Posted by Allan MacInnis at 10:25 AM