Robert Bresson at the Cinematheque 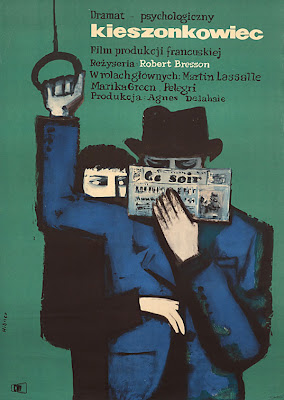 The timing couldn't be better - a major retrospective of Robert Bresson's cinema is coming up this spring at the Pacific Cinematheque, just as I am hungering to expand my awareness of his work. Allow me to confess that I have seen only one Bresson film, Pickpocket, to completion - but was fascinated; for all its restraint, the film is shockingly arousing, with transgressive hands slipping into strangers' pockets all over the place, a sort of subtly Satanic pride in sin and criminality, and an overall sense of excitement in furtive, secret meetings and anonymous transactions that amply rewards, among other things, attempts to queer the film. (Not that you gotta be gay to get stirred up). And all this from a Catholic filmmaker famed for his austerity - it's no wonder Paul Schrader borrows from it so often (Taxi Driver, American Gigolo, Light Sleeper and The Walker all owe something to it, or explicitly quote it, as does the Dardennes' L'Enfant). It's one of those films that everyone who cares about cinema should have under his or her belt, so to speak. Highly recommended.

...and by the way, I lifted the Polish poster for the film, above, off a movie poster website with an entry dedicated to Bresson; do be sure to check the other images out, since they're quite beautiful.
Posted by Allan MacInnis at 7:47 PM