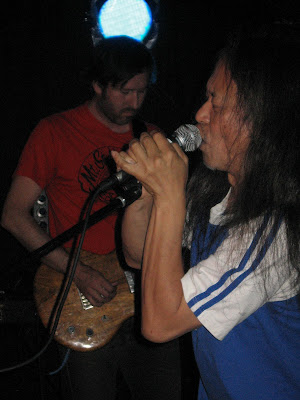 Damo Suzuki with Josh Stevenson at the Biltmore a few years ago, photo by Allan MacInnis
Hey, someone tells me that Damo Suzuki is coming through Vancouver again, to lead a set with von Bingen at the Waldorf on April 1st. Last I saw Damo jamming with Josh Stevenson at the Biltmore, the music was very much in keeping with Can classics like "Halleluwah" - anyone interested in improvised psychedelia and/or Krautrock should make this show, 'specially if you haven't seen Damo before. I've caught him twice - once at the Gate with Michael Karoli, where he leapt off the stage and gave a bunch of us hugs (including myself and, it transpires, Herr Adrian Mack); both nights were joyous, liberating experiences where (as I usually do not, cannot and will not do at gigs) I actually DANCED.

Then again, there's also Thrones playing at Iron Road Studios that night (Thrones being a project by former Melvins/ High on Fire bassist Joe Preston), with Fake Jazzer Anju Singh's new project, Dead Terror. And speaking of Fake Jazz, Dave R. Bastard and Darren (R.?) Williams will be doing a Sorrow and the Pity gig at the Astoria as part of Black Light Sundays - just close enough to the Waldorf that MAYBE one can do both this and Damo. Hmm... 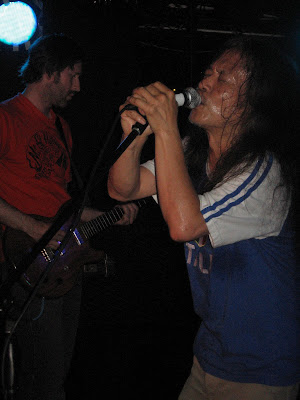