The Hanson Brothers to play... The Cobalt? 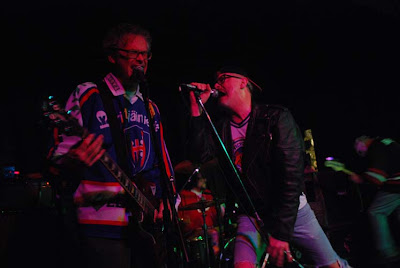 The Hanson Brothers by Femke van Delft, not to be reused without permssion

Jesus, now there's a piquant revelation: the Hanson Brothers - Nomeansno's Ramones-worshipping hockey-goon alter egos - are scheduled to play the Cobalt on May 5th. Its the first major punk show I've noted there since the venerated wendythirteen got the boot. I imagine most punks of the city - at least the ones who have been around for a few years - are pretty reluctant to set foot in that venue, however much they might love The Hanson Brothers; I certainly feel that way. I've been waiting for news of a Hanson Brothers' Vancouver show for some time, and had been planning on going; now I'm pretty sure I won't. I wonder: do the Wrights and company have any inkling of the history of that venue? Are they consciously making a move that will alienate a portion of Vancouver's punk scene (or at the least force them to make an uncomfortable choice), or are they just so far at a remove from that scene that they have no idea what they're getting into? Do they even know the documentary No Fun City exists? Maybe they think wendythirteen is still involved with The Cobalt? Maybe they don't even know who she is?

Hm. Whatever the answer, I don't imagine that this will be the Hansons' best-attended Vancouver show. (Why the hell aren't they playing the Rickshaw?).

In related news, Tom Holliston's new solo album is available at Red Cat Records...
Posted by Allan MacInnis at 11:11 AM

Now now. Tom Holliston is an immensely likable guy; he is likely NOT the main decision maker in this band; and he (in fact the entire band) may be blundering into a situation which they do not fully understand ("forgive them for they know not what they do"). Finally, spitting in someone's face is simply not cool or called for at gigs (I feel very tempted to add a joke about how it is especially inappropriate to do this with so much of his own spit on his face, as befits Tom's "performances," but I don't want to make light of this). Now now. We must strive to be civil.

It's fucking punk rock in any shape or form so fucking support it or your just shooting yourselves in the foot for any other bands to come and play! Who cares where they play?! Vancouver is so fucked up even the "punks" are pretentious pricks!!! Be there!

Seems to me that only a total asshole, someone with a vested interest, or somebody totally ignorant of the history of the scene in Vancouver could write the above comment.

Maybe a parallel would help you understand. Imagine that you had a good friend who put his or her heart and soul into a business, building a client base from the ground up, creating something cool and unique, pouring their heart into their work. You know what it means to this friend, you personally use and love the service they provide, and you support their efforts wholeheartedly - you believe in what this friend is doing, know what it means to them, and feel delighted to be on the peripheries of something so cool. Then this person is wrongly and hurtfully fired from the job, which devastates them; whereupon someone else takes their place, and, while using the same business name and location, starts imitating this friend, trying to capitalize on their successes. Would you continue to do business there? Wouldn't you feel like you were betraying your friend, just a little? ('specially if they had a competing business just down the street...?).

Much as I do feel respect and love for wendythirteen and what she's built in Vancouver, tho' - it's not just a matter of personal betrayal or such that will keep me out of the Cobalt. It's also about the space and what it meant to those of us who used to regularly go there. The Cobalt MEANT something to me, y'see. Punk rock is in part about CREATING COMMUNITY, and it did just that; it was a sort of home for those of us who attended regularly. In a pretty much meaningless, alienated landscape, where we're all just useless interchangeable consumer-worker units, spaces that actually MATTER, where you feel at HOME and PART of something, where you can really wholly be yourself, are very, very rare. The Cobalt was one such space for some of us. That's gone forever; what we had there was destroyed, and it hasn't been recreated - not even at Funky's, tho' wendy keeps tryin'. Maybe it's all a weird illusion, but the sense of the importance of that place and that time lingers on for me, and its something I want to PRESERVE AND PROTECT. I don't want to piss all over what it meant to me, make the memories of what we had there less meaningful; things are meaningless enough out here as it is.

Maybe that's all "pretentiousness" to you, but it's pretty heartfelt, for me, and I'm not alone in feeling this way. I have no objection to the Cobalt catering to other scenes - having jazz or country of blues gigs or whatever - even if I don't want to go back there myself. But going back there for a punk or metal gig is out of the question, would feel very, very wrong. I would feel dirty and shitty and compromised and ashamed of myself, and know that I'd lost something that I would rather hang onto. And I don't think I could show up at Funky's ever again, either, knowing I'd gone through the Cobalt's doors again; I don't think I could look wendy in the eye. Call me sentimental, if you like, but there's something at stake here that for some reason actually matters to me, and I don't really give a shit what you or anyone else has to say about it.

But whatever: clearly none of this stuff matters to the new owners of the Cobalt, or the Hansons or so forth. Maybe they can make a go of it, I dunno - maybe there's enough people who don't KNOW or don't GIVE A FUCK, like *you*, that it'll be a successful gig in spite of things. Good luck with that, sincerely - if the gig is well attended, then what does my sentimentality here matter? Don't ask me to attend, but - if it works out, who gives a fuck what *I* think?

Then again, if there are about twenty people at the show, you might want to reconsider your own position, whatever that might be, Anonymous. Maybe there are better ways to support the punk scene in Vancouver, eh? (Assuming you care about that at all).

Having calmed down - I don't much like being called a prick - I have followed up this post here: