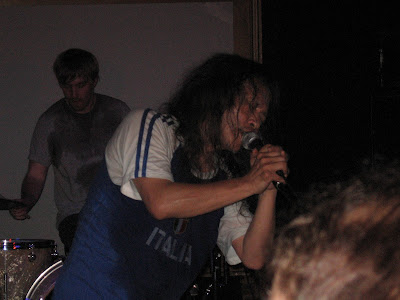 Odd. The last time I saw Damo Suzuki was the day in 2009 - August 8th, to be exact - when my mother had her stroke. My father, who, obviously, was alive at the time, elected not to tell me about it that day, since he knew I was going on a date that night and didn't want to upset me (!); he faked his way through a phone conversation with me in-between visits to my Mom in the hospital. On discovering, the next day, what had happened, I wrote about her stroke here and here. Up until that day, I had a very sexy girlfriend (the relationship, somewhat new and fragile, didn't survive the anxiety of what I was going through); I still lived in my (funky, if bedbug and mouse infested) apartment in Vancouver; both my parents were still alive; I was still employed at a decent job that I enjoyed; and I had a good friend who very shortly thereafter bailed out on the friendship, mostly because he was too cowardly to stand by me in times of trouble (good riddance!). Everything has changed so radically since then - much of it within a few months after that gig - that it's probably for the best that I'm not a very superstitious person; I would actually be somewhat nervous about seeing this show!

For the record, my original review of Damo's 2009 Biltmore gig - which may or may not have seen print in The Skinny - was as follows:

Last time I saw Damo Suzuki was circa 1998, at The Gate, methinks. Can’s since-departed guitarist Michael Karoli was with him, and the set - friends assure me - featured a couple of actual Can songs, tho’ I personally do not recall. Near the end of the set, Damo, moved by the happy dancing audience members, leapt down from the stage and proceeded to hug us. Damo is a legend to some folks - his performance on the Krautrock kings’ 1970 “Mother Sky,” for the soundtrack to Skolimowski’s Deep End, is a masterpiece of pseudomystical rock mantra-making - so this moment I remember with great clarity; it remains the single most affectionate gesture I have ever seen a musician make towards his audience. (He even kissed my friend Liz!).

At the Biltmore on August 8th, there were no Can songs, just jammy psych-rock with the sinewy Suzuki improvising channelled declamations, prayers and prophecies, as the band (featuring members of Sex Negatives, Twin Crystals, White Owl, and Josh of BCVCO, Von Bingen, and Magneticring) rocked out behind him (“Damo Suzuki’s Network” means whoever ends up playing with Damo when he comes to town). What with Damo’s (Japanese/German?) accent, the entirely improvised nature of the music, and the volume and intensity of the psych jam, I understood not one word or phrase he sang, growled, or spoke - which is kinda too bad, because I’d love to know what the Gods who speak through him have to say! ...And as with any live jam, there were moments where the center ceased to hold and musicians flailed about until they found a groove - Damo tending to just carry on with whatever previous mode he was in until they locked in, whereupon he would shift styles to match. Still: this was an epic night, intense and powerful, the passion in Suzuki’s delivery communicating more than enough, sub-semantically, to make it enjoyable and meaningful, and the exploratory, oft-fast paced music very much in keeping with the psychedelic grandeur of “Mother Sky,” without repeating a riff of it. Got me dancin’, anyhow... tho’ I had to settle for a handshake when the sweaty, exhausted, and happy-seeming Suzuki left the stage this time.

Openers Defektors gave an energetic ‘70’s-garage-punk-with-a-twist beforehand, the enthusiasm of their performance doing much to freshen what might’ve seemed a bit genre-bound, otherwise. My date, at one point, turned to me and asked if they’d really sung a lyric about living in a Taco Bell. I dunno; did they?
Posted by Allan MacInnis at 1:30 PM