The Little Guitar Army in Maple Ridge: the best of my bad cellphone photos

Awesome show in Maple Ridge tonight - the first time I've had a chance to see the Little Guitar Army since Mellow replaced Linda. Having my share of issues around change, I hadn't known how I would feel about the switch, but it turns out that it doesn't negatively impact the intensity of the band in the slightest. True, Mellow is a somewhat smaller presence onstage than Ms. Stang, but then, so was Adolf Hitler; and the less show-stealing nature of Mellow's performance has the appealing effect of foregrounding the songs and enhancing the sense of this band being a collective unit, an organic entity, a real army, as opposed to a vehicle for the scarily unhinged fantasies of being (for instance) trod on, whipped and humiliated that followed from their previous incarnation. And Mellow is a strong singer and appealing stage presence in her own right, and the songs remain, while not exactly the same, as awe-inspiring as they ever were. I had almost forgotten how good some of these songs are, actually - world-class rock that will likely never be as widely appreciated as it deserves, truly on par (and I do mean this as praise) with the 70's classic acts (AC/DC, Nazareth, Cheap Trick, Blue Oyster Cult and more) that inspired them. One of Vancouver's very best bands... Cal sported facial hair and dedicated "Can't Fix Stupid" to his ex-wives and parole officers; and Tony Bardach, witnessing my struggles with The Wolf's ATM, kindly bought me a beer - thanks, Tony! Also thanks to the Likely Rads' Jay Raymond for making this happen (I almost got a contact high from his body odor). The keepers of my cellphone photos follow... 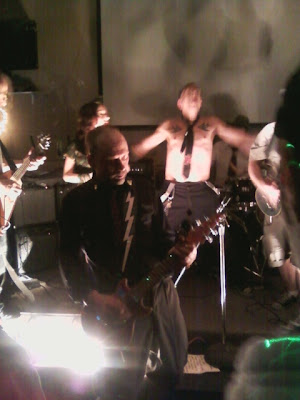 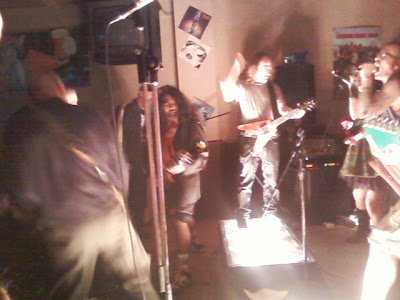 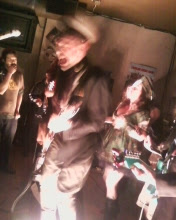 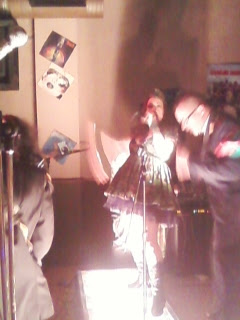 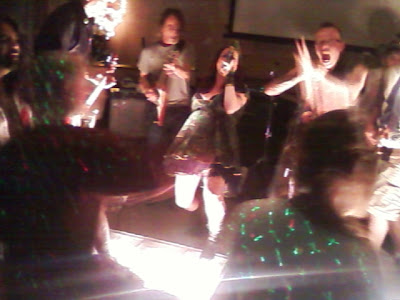 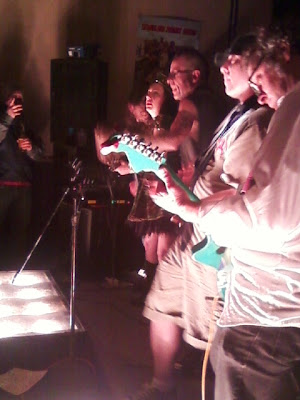 Your comparison of Stang's stage presence to that of Hitler's is quite accurate. She has been known to throw up the Nazi Salute every now and then and often brags of her German heritage.
LGA will never be as big as they could be because they continually get in their own way. They block their own progress, which is unfortunate because they could go very far. Imagine how well they'd do in Japan! They are a great band.

The article actually compares mellow to hitler. It blows my mind that someone would call linda a nazi for being proud of her german heritage. I suppose this person also feels that all proud canadians support native genocide? Or is this just an opportunity to slag someone you have a personal grudge against. Oh well, it seems Linda continues to steal the show nearly a year after her departure.

So true. Jay smells awful. Its like an old lady ate a dozen eggs and farted through an onion. Also lga are a band. So, all in all, a pretty factual article...

Actually, um, you're wrong on both counts: it compares Linda to Hitler, not Mellow (read it again); and it hardly constitutes a slagging of Ms. Stang. Linda was awe-inspiring, and her odd flirtation with signifiers of Nazism ALWAYS seemed to me a) ironic, and no sign whatsoever of her being a Nazi; b) thematically relevant to the band and its flirtation with militaristic images; c) a perfectly appropriate to the "Nuremberg rally" aspect of the rock concert. It would have been fully in keeping with her aesthetic to perform in an SS uniform, even - something no less a figure than Lemmy has flirted with, and he's not even German! I mean nothing but fondness and praise for Ms. Stang - she was a terrific performer who, one hopes, will find another venue in the city for her art. I mean, dig, there's a *reason* why I hadn't seen the band since she was replaced...

All the same, they ARE still a great rock band in their new incarnation, and Mellow has her own thing going, which is quite workable. Can I not write this without making enemies of someone?

Really. I read it as mellow, like hitler is smaller in stature than linda stang. What am i missing? My comments are directed at the first comment. No issue with your article at all. I just think the first comment was mabe by a hater.

When what I meant (perhaps unclearly) was:

Have you been drinking Al. Be honest. Regardless, i was responding to the first comment. Your article is great. I stilk think that line reads as something like 'mellow, may be smaller than linda, but so was hitler' i.e. she does not lose impact because of her stature. I will corner you on this over a beer sometime.