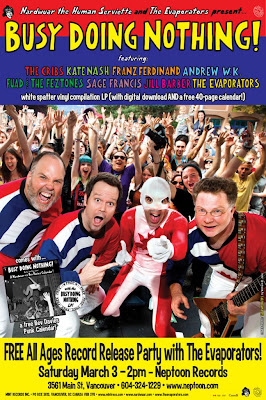 The Evaporators' new project is so jampacked with joy that it staggers me; no way can I fully do it justice in my present state, but I have to issue at least ONE burst of enthusiasm for it prior to the record release show(s) this Saturday. The LP is only half the project, tho' a splendid half it is - with one side mostly devoted to Vancouver covers, performed by some very cool guests: Franz Ferdinand doing the Pointed Sticks ("Real Thing"), Kate Nash covering Cub ("My Chinchilla"), Fuad and the Feztones doing an early Evaporators song ("Welcome to My Castle" - original here), and the Cribs covering the Dishrags. Andrew WK also guests for an instantly catchy Evaporators work-stress original, "I Hate Being Late When I'm Early" - that's a link to a new Evaporators/ Andrew WK video, showing (presumably) the inside workings of Nardwuar's gig at CITR, with lyrics capturing, among other things, the universal experience of having to move stuff that's in the way so you can get on about your gig; there's genius in capturing small details of life like that, which EVERYONE has experienced, but have never made it into a song before... There's also one side of mostly Evaporators originals and even an Evaporators' cover of another artist, "rockabily truckdriver" Doug Rutledge ("Bring It On Home" - Jill Barber does a guest vocal). I've actually only spun the vinyl once through, to be honest, but the overall impression is that the whole album is energy-raising ear candy, very easy to listen to, and pretty much guaranteed to infect you with its exuberance - just like Nardwuar! And it can be had in white splattered vinyl, too - just like Nardwuar! 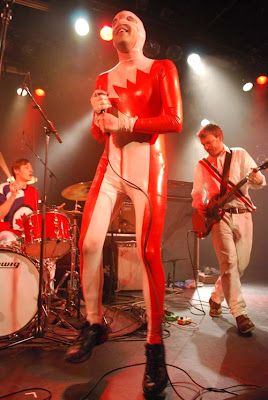 ON TOP OF THAT, though - as if you need ANOTHER reason to buy this record - there's also a whole new Bev Davies calendar included (kinda weirdly overlooked in the Straight review) loaded with photos, many of which (Iggy!) I've never seen before, and a new Nardwuar-vs-Bev interview about each pic, as per Nard'n'Bev's developing tradition. 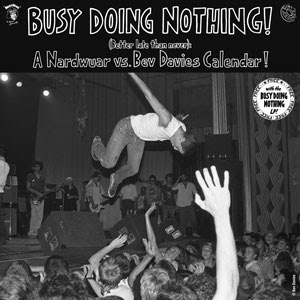 By the by, for any of you who think it might be weird to release a calendar/LP package in March, note that the calendar covers the remainder of 2012 on two pages, illustrated with a pic Bev took during the making of the now-on-DVD Vancouver-lensed punk cult classic Ladies and Gentlemen, the Fabulous Stains - I actually DID NOT KNOW that Laura Dern was in that! - then covers 2013 with a giant glossy B&W photo every month, including the Slits, the Cramps, PiL, and the "fight using your balls" photo of d. boon of the minutemen that Nardwuar and Watt talked about when Nardwuar interviewed him last year. Then - this is a 40 page long calendar, you dig - there's a whole 'nuther two-page spread for 2014, so you can just KEEP THIS CALENDAR ON YOUR WALL FOR THREE FECKIN' YEARS! (which is amazingly convenient and environmentally sound, when you think about it). I won't tell you who-all-else is in it, but it actually OUTDOES the last Mint Records Bev Davies calendar by at least a few hundred yards, and makes me wonder what else I haven't seen of Bev's. I mean, I didn't even KNOW she'd photographed the Gun Club. Or that the Gun Club had ever played the Commodore, for that matter. Apparently Nardwuar made Bev look really hard for that pic - I can see why! 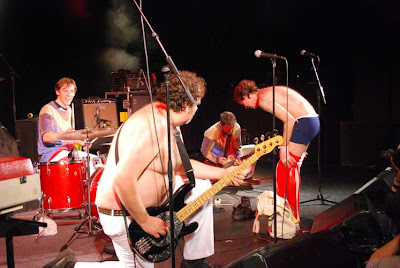 Anyhow, its really an awesome package, crammed with delights and deliriousness, and anyone with a love for Vancouver music, or pop-punk, or punk photography, or Nardwuar himself (because he's a pretty astonishing guy, overflowing with passion for music and Vancouver culture - he blew both Eugene Chadbourne and I away by revealing that Boris Karloff helped build the roller coaster at the PNE as a labourer!) should a) go buy it and b) go check out the free Neptoon in-store record release with The Evaporators this Saturday, starting at 2 - though note that Nardwuar's in-stores tend to get PACKED, so you'd best arrive WAYYY early. And then the Evaporators open for Andrew WK at the Venue, proving YET AGAIN, for anyone who might have missed it, that in the smorgasbord of Vancouver culture, Nardwuar is the caffeine. 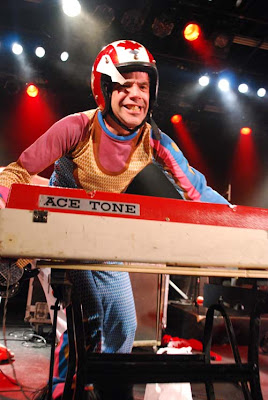 End burst! ...tho' by the way, while you're at Neptoon, if you don't already have it and are inspired by Nardwuar's release to do a wee bit more shopping, last I checked, they still have copies of their History of Vancouver Rock and Roll volume 4, featuring psychedelic and garage rock bands of the 1960's, some of whom Bev knew when she arrived in Vancouver! Check out this tune (on the comp) by Maple Ridge's own Northwest Company! (It's actually a VIDEO! Wow...).

In other news, the Straight printed a Likely Rads review I wrote, just in time for their gig opening for the LGA on Friday (see below). That's a great release, too, but I got no more mojo to draw on, here. Go see The Evaporators at Neptoon and/or the Venue! Go buy Busy Doing Nothing! You will ENJOY it!
Posted by Allan MacInnis at 8:55 AM