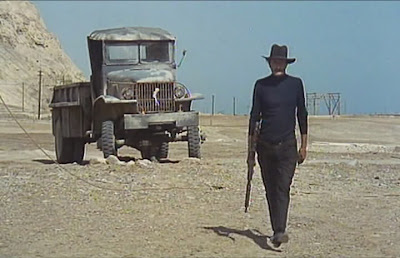 Does this image from Roland Klick's Deadlock remind you of another cult movie?

At least two of the films that Can wrote soundtracks for in the 1970's, Deadlock and Deep End, circulate as grey market DVDs and likely as torrents: Deep End is a disturbed coming of age film, directed by Jerzy Skolimowski, who also made The Shout (which Brendan Gleeson is seen watching on TV in The Guard) and the recent Vincent Gallo film Essential Killing; he further played the cantankerous ex-KGB uncle in Cronenberg's Eastern Promises, which is where most readers will likely have seen him. Deep End makes extended use of Can's "Mother Sky," but also includes Cat Stevens songs, while Deadlock - a film I have only just discovered and have not yet finished - presents itself as a modern, quasi-psychedelic spaghetti western, very much of its time (1970), and appears to be entirely scored by the band. What I've seen of the film thus far is very, very interesting. People wishing to prepare themselves for Damo might find it  enjoyable to look at the way a couple of the songs from the Can soundracks album - especially the title song and "Tango Whiskeyman" - are used in Deadlock (both videos linked feature images from the film, while the link under the Deadlock title, at the top of the post, leads to IMDB boards that offer a far more thorough description of the film than I am giving here). Not sure if living torrents for Deadlock exist - it's obscure enough to have no Wiki page and only three IMDB writeups - but Video-Trash has an excellent version of it available on eBay (presumably a greymarket transfer from a PAL DVD). He also seems an excellent source for REAL spaghetti westerns, including very nice looking copies of the Klaus Kinski films The Beast and And God Said to Cain... 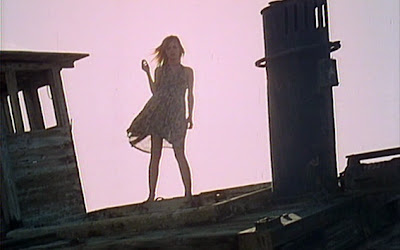 Posted by Allan MacInnis at 2:43 AM