Bison BC-related gig: Congress, Scarebro and Big Nothing at the ASTORIA (not the Biltmore as I previously wrote) 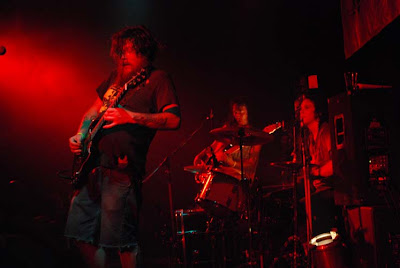 Bison BC in a former incarnation, by Femke van Delft, not to be reused without permission

Wow: Congress actually kinda reminds me of (sainted faves of my grungy youth) Tad, except they're way uglier - check this stuff out! (Looks like that's Matt Wood of Bison BC and Haggatha on drums, too). They play the Astoria with Bison BC pop/punk sideproject Scarebro and another very cool-sounding band, Big Nothing, on Friday March 16th. Sounds like exactly the sort of cathartic sludgebath that might rejuvenate  exhausted shaggy souls like mine, 'specially with liberal doses of beer... Hmmm...

By the way, click the Tad link above for news on Tad Doyle's upcoming Brothers of the Sonic Cloth album...
Posted by Allan MacInnis at 12:27 PM

Hey hi! Is this show at the Biltmore (as the title says) or at the Astoria (as the post says)? Thanks

Whoop! Screwed that up. It's at the Astoria, thanks for catching this.