West of Hell at the Rickshaw Saturday, plus... 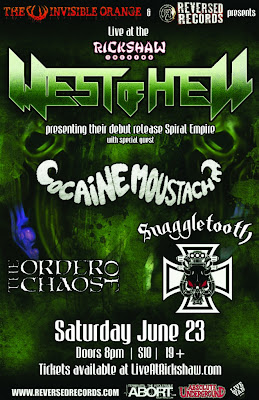 It's funny - even just a few years ago, I would have chuckled in a most superior and snobbish way at the music of West of Hell - a music full of corny metal pomp and juvenile glee at predictable thrashed-up Priestisms. Now, exactly the same things that would have been objects of my derision put rather a large grin on my face and make me want to see them play, preferably after having had a couple of beers. Funny how that works, eh? Must be my mid-life crisis. Plus, hell, they relocated here from New Zealand for the sake of their careers - that's some commitment, raises the obvious question of, "Why Vancouver?" and makes me kinda feel like we ought to get out there and support'em, especially since this sounds like a really, really fun gig. Motorhead tribute band Snaggletooth play, as well, and Cocaine Moustache, and The Order of Chaos... Hmm!

By the way, apropos of nothing, the Jan Svankmajer series has begun at the Cinematheque, and a major Fassbinder retrospective is planned for the summer, featuring some of my favourites of his films, including the obscure Sirkian melodrama Fear of Fear, about a housewife having a breakdown, which he shot for German TV. Despair, alienation, loneliness, fear, predation, social decay - nothing says summer in Vancouver like the films of Rainer Werner Fassbinder...

Finally, those of you who have been meaning to get out there and plunder Book Off should note that their final day is Saturday. I stopped in a couple of days ago, and CDs were 80% off (with the original price often having been as low as $3.50); DVDs 40% off (with the original price for most being $5), and tons of their books were selling at four for $2. It's getting pretty picked over, but there were still a few gems to be found; I can imagine a real feeding frenzy will ensue if they mark things down further, though much of their stock may simply never sell to anyone... Again, their location is on Hornby between Dunsmuir and Georgia, just a block from the VAG. It's a heartbreaking blow to the Japanese community here - one girl I chatted with said that Book Off closing "makes me not want to live in Vancouver anymore." They were certainly my favourite place to shop when I came into the city, not the least of which because I sometimes shopped at Book Off when I lived in Japan...!
Posted by Allan MacInnis at 4:21 PM