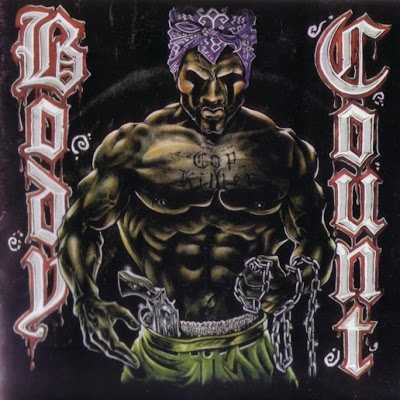 Believe it or not, when I was an ESL teacher, I got my best-ever lesson out of the Rodney King story. The Discussion Skills curriculum - a little thin, as most curricula at the school where I taught were - asked me to do a class on violence in the media, which approached the topic from a typically conservative, "aren't these lyrics awful" PMRC-like place, focusing around a fairly violent Metallica song. I wanted something a bit richer than that, something that put violent lyrical imagery in context. So - after a warm up discussion on censorship, offensive song lyrics, and so forth - I told my students the story of the Rodney King beating, then played them Body Count's "Cop Killer," minus the spoken intro that appears on that clip, but with the lyrics printed out. Without explaining that the song actually ended up being removed from retail history in an act of record label self-censorship, I asked them, given the social relevance, on the one hand, and the extremely violent lyrics on the other, if they thought the song should be censored or not. For mostly Asian and Latin American students choosing to study in Canada, sometimes because they thought America would be "too violent," or were aware of problems with racism in the USA, it was always an interesting and animated discussion, after which I'd get them to brainstorm reasons why the song should be censored or not, after which we took a final vote to see which side students were on. I count it as a measure of the success of the lesson that students generally felt free to weigh in on either side, and that the final vote could go one way or the other.

...I actually saw Body Count perform that song, by the way, at an early Seattle Lollapallooza. It might not look it from that clip, but in person, the experience was terrifying. I was unprepared for what a Body Count performance might look like, had never heard the song before, and - from only a few feet away from the stage - was vastly intimidated by the black-clad, all-black band as they launched into the song. (I remember people coming onto stage dressed in uniforms with fake pistols, but I don't see them in the clip, so...). Scarier yet, the pit was huge and intense and some girl in front of me got sucked under, so I felt obliged to dive down and rescue her. Having gotten her safely out, I elected to skip the next band and go pass out by the merch tables, where I remained through the next few bands - I can remember hearing the Butthole Surfers in the distance and just thinking, "Naaah." (Granted, I was sleep deprived and had taken some really mediocre acid in the hopes that it would wake me up, so it wasn't just Body Count trauma that sidelined me so). I only ever caught Rollins and the Violent Femmes and Body Count at that show... the rest of it, I was either passed out by the merch or asleep in the car.

None of this really has much to do with Rodney King's passing, but I really have nothing much to write about him. It's kind of hard to write about someone whose most important contribution to culture was getting the shit kicked out of him by brutal Los Angeles cops! Still, 47 is far too young to die... My condolences to those who knew him.
Posted by Allan MacInnis at 11:18 AM