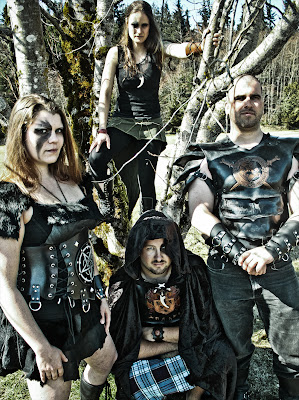 I'm planning a large-ish piece on folk metal, involving last years' Scythia, Arkona, and Korpiklaani concert in Vancouver, but there's still stuff in the way of it. Still, anyone with a fondness for D&D, (non-sexual) fantasy role playing, or tuneful, playfully presented, shamelessly geeky and sincere metal, who might want to see it played by people in cool costumes (including a fetching female oboe player, Morgan Zentner, to the left in the above photo) should check out the Astoria tonight (ie., Saturday, June 2nd), where Scythia - whom I interviewed for the Straight here - will perform with Cradle to Grave, Aeterna, and Nanaimo Viking metal band Eye of Odin (none of whom I have yet checked out, but presume are all fine bands in their own right - I didn't even know we HAD any Viking metal in BC). Scythia have been incorporating some folky Quebec reels into their metal, which is a really appealing and pleasing move, by me - I'm totally jealous of bands like Arkona and Korpiklaani who can draw on their own people's pagan heritage while leaving us North Americans with LARPing and Tolkein or at fantasy reconstructions of our somewhat distant ancestry before the emigration to North America took place, so seeing *actual, indisputable Canadian content* in a metal show - even if it's French Canadian! - does my heart some good. Proceeds to the Richmond Animal Protection Society - Scythia's Dave Khan, in the press release, says the band is "stoked to rock out for an honourable cause like animals. A huge inspiration for our breed of folk metal is having a symbiosis with animals and nature... Especially bears, but dogs and cats are awesome as well." 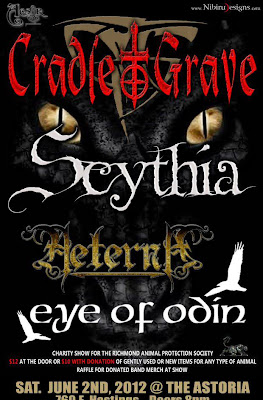