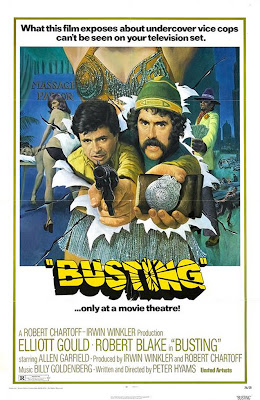 MGM's Limited Edition Collection has released a no-frills, burn-on-demand DVD of a 1974 Peter Hyams film I've always enjoyed, Busting, which might be described as a police story for people without much fondness for the police. A counterculturally-tilted variant on The French Connection, it stars Elliott Gould and Robert Blake as two disillusioned Los Angeles vice squad cops who, discovering their superiors are in bed with the sleazy, well-to-do gangster responsible for most of the city's drugs and prostitution (played by a cherubic, snickering Allen Garfield), decide to take matters into their own hands. What's interesting about the film is that, unlike your typical vigilante tale, Gould and Blake do not end up as righteous winners; they simply get more and more cynical and disillusioned, suffer greater and greater personal consequences for their unsanctioned antics, and in the end - a minor spoiler follows - end up with a victory so near defeat that it calls into question everything they've done. Along the way, we see them arresting prostitutes and harassing clients at a strip club, a massage parlour and a gay bar; the film extends considerable sympathy for their victims, and repeatedly raises the question of the value and meaning of their activities, especially since no one else around them seems to care much or want them to proceed. This is a question the two will come to ask themselves by the end; this is a highly pessimistic film, though not without considerable dark humour. Blake is under-used - as is Sid Haig, in a supporting role - but Gould is at his most entertaining, reading his character as a slightly angrier variant on Philip Marlowe in Altman's The Long Goodbye, made a couple of years previously: full of wisecracks, cynical shrugs and smartassed one-liners. He even calls a character "cutie-pie" - a term associated with the Altman film - and calls a couple of incompetent and possibly corrupt uniformed cops "pigs," something Marlowe also does at one point; it's a bit more shocking to hear when Gould is playing a cop himself. This was Hyams' debut in theatres, is skilfully crafted throughout - especially a foot chase culminating in a shoot-out at an open air grocery market - and is very much of the time and place of its making, having all the hallmarks of the gritty cinema that flourished in the US in the early 1970's.

While I'm glad for the release, and am generally satisfied that the film is presented in its correct widescreen aspect ratio with a decent transfer, I have two complaints. First, the MGM Limited Edition Collection series generally seems prohibitively priced; it doesn't exactly make sense to sell these at $30, given the no-frills, burn-on-demand presentation (the only extra is a trailer, and there are no subtitles or captions; the DVD further has a generic packaging and menu, made with little love and not looking very impressive on the shelf). Not *that* many people are so enamoured of this film, after all; if MGM actually wants general consumers of DVDs to buy these, coming down a notch would be wise. (There's another MGM burn-on-demand, an early body horror film called The Incredible Melting Man, that I would happily have bought for $15, but am in no way prepared to pay twice that for). Secondly, the playback may be dodgy on cheaper DVD players; this is as much a caveat as a complaint. I switched my Mom's player awhile back to a cheapie $25 Curtis, so I could play AVI's and such (which her better-quality previous machine would not do). Most DVDs work just fine on it, but Busting, while being brand new, had various video and audio glitches, the image fragmenting into mosaics, stuttering, and skipping ahead a few seconds at various points. It plays just fine on my own DVD player (an LG), but all the same, people with cheaper or more sensitive players should be warned that, despite the fairly hefty price, you may be getting a disc that won't work properly in your machine. And that ain't cool.

One place I have no quarrel, however, is with the choice to release this particular film on DVD. Better burn-on-demand than nothing; this is a highly entertaining film, too long neglected. By the by, a much more detailed plot description can be found on DVDTalk, here.

Posted by Allan MacInnis at 8:17 PM