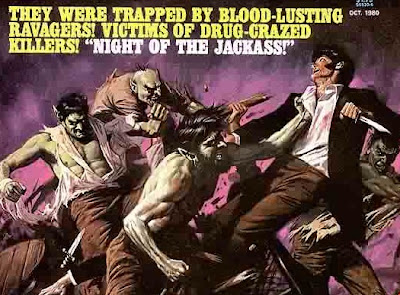 I always thought there was a movie to be made adapting an old Eerie story called "Night of the Jackass," about a drug that turns people into homicidal monsters. Disturbingly, the recent face-eater in the news appears to have been smoking a new drug called bath salts, which triggered his violent episode (when I first read the headline I thought he'd been sent over the edge by mere bathing). An actual user of the drug describes the effects here. When real life begins resembling an Eerie comic...
Posted by Allan MacInnis at 9:13 AM