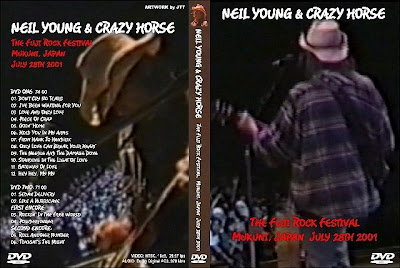 I've only ever seen Neil Young once, with Crazy Horse at the Fuji Rock Festival in Japan in 2001. The three day fest was almost more of an ordeal than it was worth - it was dusty as hell, camping was really uncomfortable, and the water for the showers was piped in direct from the mountain rivers. Despite Patti Smith's earnest onstage prayers to "beautiful Mount Fuji" in her run-up to "Rock'n'Roll Nigger," the Fuji Rock Festival has long been located in the mountains of Niigata, at the Naeba Ski Resort, and trust me, even in July, the water coming down from the mountains there is fucking cold. Any westerners, including myself, tended to scream when the blast first hit (the young Japanese men in the lineup were far more stoic when their turns came). It was so uncomfortable that when the then-unknown duo of Tegan and Sara, doing an opening set in a side tent, joked between-songs to the audience about how it must suck that we had to camp, because *they* were staying in a hotel, I gave them the finger over my shoulder as I walked out, homegirls or not. I missed several bands that I was curious about (Oasis, Tool) either because I was sick with fatigue in my tent or was at another stage where something more important to me was going on. I even got a horrific sunburn on my left thigh when I fell asleep in shorts while the Boredoms were doing a kind of uninteresting daytime rave thing. None of this would matter if I cared about every single band on the lineup, but at least some of them (like Stereophonics), were, I thought, quite thoroughly mediocre, in a why-the-fuck-are-these-guys-successful kind of way. Best of all, I had to spend something like $500, all told - for the tent, transportation, wristband, and so forth - for the privilege of being there. Even with generous JET Programme paycheques, that was a bit of a hit to the pocket.

All the same, there were highlights. I got to see the excellent Japanese reggae band Dry & Heavy at the show where their bassist, Heavy, announced to a shocked crowd that he was leaving; a friendly Japanese hippie-dude delighted by my white-guy approval of Dry & Heavy's music helpfully translated the announcement, which, coming at the end of their concert, sent a real shockwave through the crowd, a huge collective gasp/moan rising up into the dust. Earlier that afternoon, I'd discovered in the sunlit field in front of the main stage that what I'd read online was true, that dragonflies were so plentiful that if you stuck a finger into the air, one would presently land on it. Seeing Patti Smith was a treat, of course, and I got to see the full set by System of a Down, which was pretty impressive, even though I was still in my anti-metal phase then and resistant. Watching what a weird performer Alanis Morissette was (she spent most of her set seeming to hide behind her hair) had its interesting moments, too, as did the enthusiastic Japanese reception of the Hothouse Flowers. They seemed even then to have been forgotten most everywhere else, but Japanese girls flocked to pose with the obliging singer for photos, afterwards. There were other weird details - like passing checkpoints manned by enormous black US military dudes hired as security for maximum intimidation value; I don't get to see that many African American people in Vancouver, and when they're seven feet tall, five feet wide, and talking in Ebonics, it makes an impression. I can remember the Thai noodle soup (with plentiful cilantro) from one vendor, and gawking in horror on the last day at an enormous mountain of plastic bottles piled up in one field by the cleanup crew (and no doubt, because this was Japan, slated for burning). Best of all was getting to see Brian Eno do a rare live set, mostly of instrumental material that would be shaped into the Drawn from Life album, but closing on a welcome rendition of "No One Receiving," with Eno singing, which was a privilege indeed to see. I remember still the feeling, dancing with my eyes closed to Eno's music, imagining myself a happy sperm wriggling my way towards the light...

And then there was Neil Young and Crazy Horse.

I've revered Neil Young and Crazy Horse since I was a teenager. During my teen punk years, when I sold off all my classic rock because it was "too status quo," as far as I remember, I kept Re*Ac*Tor and Everybody Knows This is Nowhere and Rust Never Sleeps (I hadn't found out about Zuma yet). In fact, getting to see Crazy Horse live after some twenty years of fandom was such a big deal for me that it nearly ruined the experience: I was so intent on reality checking myself and critiquing my reactions, trying to find the appropriate mindframe to FOCUS from, that it was almost like I missed the set; my own self-consciousness took away from my ability to be present. (Marijuana would have been really useful, in fact, but is massively taboo in Japan, and I avoided it all the time that I was there. Some Japanese kid was smoking it in front of me, I remember, but he couldn't handle it at all and ended up sitting on the ground in the midst of the crowd, where he remained the whole show. No way was I going to try to get a hit off THAT joint!). Scanning the various songs that I can find online, in fact, I'm surprised to see some I've forgotten completely - like this stunning version of "Hey Hey My My." (I confess to pausing the video during the various crowd shots to see if my face is visible, but it isn't). I have a bit more recollection of "Tonight's The Night," and dim recollections of a Crazy-Horse-less acoustic digression that Neil took, mid-concert, doing, I think, "The Needle and the Damage Done," "From Hank to Hendrix," and other songs - like a few new ones that would pop up on Are You Passionate? - that I didn't really need to hear at a Crazy Horse show. I confess to further being disappointed that they didn't do "Cortez the Killer," which, in the realms of what can be called classic rock, is probably my favourite song. The 10-minute-plus closer of "Like a Hurricane" was amazing, however; I was standing near enough to the stage to see the wax in those huge candles sputtering as they melted down. For some odd reason, though, the song that really stood out, maybe because before seeing it live I thought it kind of a throwaway, was "Piece of Crap." They did it earlier in the night, and they pumped up not only the audience's energy, but their own; it made that song come vividly alive for me in a very exciting way,which had the dual effect of lodging it in my mind. It blows me away to discover that I can re-visit most of the show anytime I want on Youtube. (And once this torrent finishes, any time I want on TV, too...).

Tickets go on sale for Neil Young and Crazy Horse next Thursday, apparently. In no way can I afford to go to this, but if I can get a ticket, I suspect I shall... This is one experience I don't want to miss - it's not like there'll be a lot of other opportunities.
Posted by Allan MacInnis at 2:17 AM