A striking Bobcat Goldthwait synchronicity. Or psychic phenomenon. Or something. 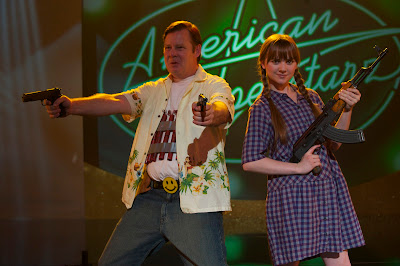 I swear that what I'm about to tell you is 100% accurate, honest, a description of a fresh and rather startling experience had this evening, in the very office chair where I now sit, typing this.

I've just finished watching a streamed press screener of Bobcat Goldthwait's God Bless America - opening this weekend at the Vancity Theatre, with the writer/director in attendance. Midway through the film, I was debating with myself whether I was going to lend it my voice in support. The film has some fundamental problems, which I'll outline presently; it's also pretty damned entertaining, and I admit that more than once it had me quietly laughing and applauding, often at its darkest, least responsible moments. At some point I caught myself thinking of a song, apropos of absolutely nothing; I'd seen no trailers for the film, let alone one that uses this particular tune; the song isn't mentioned in Adrian Mack's interview with Goldthwait in the Straight; and there are no cues in the film - which overtly mentions Alice Cooper, but never The Kinks - that suggest it might turn up, unless they're subliminally buried deep down in the soundtrack, in which case I wouldn't know about them. I swear I had no reason I can think of for the song - The Kinks' "I'm Not Like Everybody Else" - to come into my head. With Ray Davies coming to town in a few weeks, obviously The Kinks have been on my mind lately - see below for more on that - but this isn't even a song of theirs that I know well. Yet as the film played, suddenly I found myself thinking, out of the clear blue, that it would be just perfect to use it on the soundtrack for the film. I sort of hummed it to myself internally as I scribbled a note, then I returned my focus to the screen, prepared to think no more about it.

About fifteen minutes later, this exact song is used, in completion, to great effect.

Based on this synchronicity, if that's what it is, I've decided that I'm going to lend my support to this film, have decided that Bobcat and I must somehow be on the same team. His unwittingly validating my ideas about what songs would work in the soundtrack seem to oblige me to validate the movie, in spite of various issues I had with it whenever I stopped to think about it. I will nonetheless mention these. For one, God Bless America presumes to take the moral high ground and lecture Americans about having "lost our kindness" and having ceased to be "civilized" - especially re: vulgarity in the media - while beginning with a man vaporizing a crying baby with a shotgun (or at least fantasizing about the same). I actually had no problems with this scene - in terms of outlandish and bold cinematic misanthropy, it scores pretty high, worthy of the sniper-fantasy of Bill Maplewood in Todd Solondz' Happiness. But kindness and civility are not qualities that one thinks of, watching it. That scene plays thus: Frank, the main character - a sad-sack pudgy middle aged white guy - is lying in bed, sleepless, hearing the noise of his neighbours through the wall. His voice-over narration makes clear that he is subject to migraines and that he finds the banality of their conversation - they are heard discussing Michael Jackson and Lindsay Lohan - impossibly irritating, a "constant cacophony of stupidity" that he finds "soul-crushing." The noise of the blaring Entertainment Tonight-style TV show they favour and the interminable squalling of their baby don't help matters. Cut to Frank's fantasy, where he goes next door with a shotgun. He shoots the TV first, then the man, then - as the mother holds her baby up, pleading for him to have mercy - the baby. The mother is covered in her baby's blood. Frank is merely spattered with it. Bits of fluff from the infant's disintegrated clothing float through the air, as happy music rises on the soundtrack. Then Frank shoots the woman, too, and smiles.

There are really only two rational responses to such a scene. You either immediately get up and leave the theatre (or press stop, or do whatever you're doing to exit the experience) or you cheer and grin and applaud Bobcat Goldthwait's audaciousness. I confess that I did the latter; if you think you might do the same, you should probably go see this film, particularly this weekend, with the director on hand. 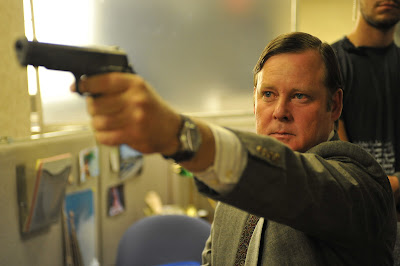 It remains the case that there are some contradictions at work here. God Bless America rages against homophobic, racist, anti-female elements in our culture, but it has the same basic feel-sorry-for-the-white-guy structure as Falling Down (a far more reactionary film, but equally concerned with a middle class, middle aged white guy who loses it and goes on a rampage). It presents American popular culture - especially shows like American Idol, Fox News-style political pundits, and reality TV - as a vast cesspool of tastelessness and degeneration, but it holds up no positive alternatives short of going on a killing spree; in fact, to the extent that alternative ways of creating culture are mentioned (like punk rock), they are brought up only as objects of ridicule. Frank sits channel surfing, allowing his soul to be destroyed bit by bit, feeling more miserable by the minute, but simple answers to the problem (like not watching TV!) don't seem to occur to him. Finally, the film wants to have it both ways in regard to its core relationship, between Frank and his under-aged female companion, Roxy; it tells a story on the one hand of a middle-aged man whose life is revitalized by a relationship with a younger girl, while actually including in its screenplay a rant against the exploitation of young women by older men, taking a potshot at Woody Allen and including lines like "fuck Vladimir Nabokov!" News for Bobcat: in Japan, where video rental stores actually consider "Lolita" movies as a genre, and shelve them together - including relatively innocent films as Peter Bogdanovich's Paper Moon or Wim Wenders' Alice in the Cities - God Bless America would likely end up on the same shelf. Not saying that it's not a wee bit fucked up that the Japanese do that - their tolerance for pedophilia is vastly larger than ours - but it still should make clear that there are a few contradictions at work in this film.

All the same, the satire of American popular culture here is pretty damned accurate, and often gleefully savage. Much of the fake TV in God Bless America is as horrifying as real TV, and many of its targets, from the Tea Party to people who use their cellphones in movie theatres - are utterly worthy, if somewhat easily chosen. God Bless America reminded me at various points of some of the crankier later stand-up routines of George Carlin, which I hope Bobcat would take as a compliment; the film is not actually that far removed from being a thinly-disguised stand-up rant, one which would also please fans of people like Bill Hicks or, presumably, Bobcat himself (I actually don't know his stand-up that well; for those who are curious, the Vancity will also be screening a recent performance film he did, tomorrow, in a double bill with God Bless America).

So to hell with it: even if it contradicts itself on a few counts, y'all should go see God Bless America.  Bobcat is probably one of the good guys, and I think pretty much anyone who visits this blog will enjoy his newest film. 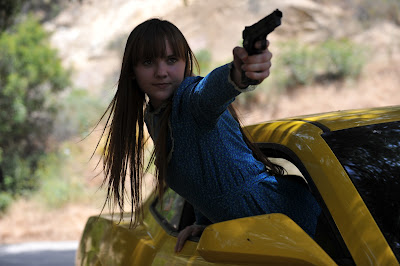 Posted by Allan MacInnis at 2:19 AM