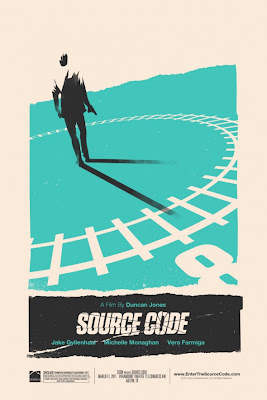 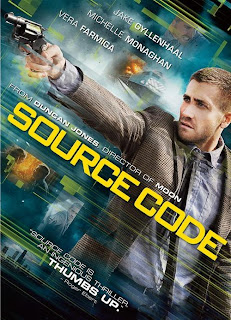 Unlike the magnificent, Saul Bass-y theatrical poster, above, the box art (left) for the DVD for Source Code - here in Canada, at least - presents the film as an action movie. Apparently this is because someone out there figures that rather than helping the film find the hard SF audience that is most likely to appreciate it, the disc will move more units in the short term if packaged thus.

I don't really respect that sort of marketing cynicism - I also preferred the more minimal, cerebral art for Duncan Jones' previous film, Moon - but alas, it's not wholly unjustified, in this case. Jones fundamentally remains a hard SF filmmaker, but he does appear to be aiming for the blockbuster audience here. In addition to complex thoughts on parallel realities, life after death, death itself, and a rather daringly imagined new military technology (which owes a bit to Deja Vu, that Tony Scott thriller with Denzel Washington - a point of reference that is not being widely made), there are thrills, jolts, and the sort of inspirational, feelgood climax that everyone seems to be aiming for these days (inspirational, feelgood climaxes being the current opium du jour of the masses). The theatrical poster, in fact, makes Source Code look altogether more restrained and Hitchcockian than it really is.

Don't get me wrong - the film, like Limitless, is excellent if you're looking for a good thriller; it's far above average, far smarter, far more engaging as cinema than most action movies NOT written by someone with an obvious flair for hard SF. I heartily recommend it if you're seeking that kind of thing. However, I gotta say it, I find it kinda sad when some gifted, smart indy film like Moon is made, then, after it hits, is followed with a brisk plunge into the waters of Hollywood. I vastly prefer it when someone deliberately chooses to follow their own vision (Kelly Reichardt, Larry Fessenden, even Jim Jarmusch and the Coens), making films to please themselves, rather than making films to please the largest market share attainable.

I mean, readers must have some idea what I'm talking about, but we can name a few names. I actually enjoyed the one Fast and Furious film I saw (That being Tokyo Drift: ridiculous and just-flat-out-wrong as a representation of Japan, but giddy cinematic fun no less) but I *respected* Better Luck Tomorrow, the film that broke Justin Lin, and would love to see what he might be doing with his talents if he eschewed the megabudget bait and made more personal films; he seems locked into the race car franchise now. I respected and enjoyed Doug Liman's Swingers and Go!, and briefly considered him someone to follow, but I want nothing to do with his Bourne film or Mr. and Mrs. Smith. Tony Gilroy's Michael Clayton was fantastic - a film I admire and respect and will continue to revisit for its characters, dialogue, and morals, which couches its inspirational elements in so much despair, anger and cynicism as to make them palatable even for grouches like me. His follow-up, Duplicity was possibly excusable - a lighthearted creampuff of a romantic thriller - but I see he's now part of the Bourne franchise, himself. Guess that means no more Michael Clayton's for us. Even with the feckin' Wachowski's - my favourite film of theirs remains their first, the lesbians-vs-the-mob noir, Bound; while I liked the first Matrix, and obligingly tried to enjoy the second and third, with little luck, I drew the line well before I got to Speed Racer, and there it remains. Even sainted cinema heroes like Martin Scorsese can be tarred thus; I mean, if John Cassavetes thought Boxcar Bertha was a piece of shit, as the famous anecdote goes, what would he think of Shutter Island? Yet more: I'd rather watch Chris Nolan's Following or Memento than anything he's done since. PT Anderson's most satisfying features remain his first two, while his most grandiose and hyped, There Will Be Blood, is (I still think) a bit of an embarrassment. Hell, I was even disappointed when Quentin Tarantino followed up Reservoir Dogs with the much lighter Pulp Fiction (tho' he redeemed himself with Jackie Brown, before returning to safer, shallower waters). Joining the dark side from time to time is fine with me, to finance ones "real" projects or to just keep busy or relevant - Brian DePalma is a master at it - except the problem with American cinema is, to quote Paul Sorvino in The Gambler (or at least paraphrase from a faulty memory), in American cinema it seems that once you ain't a virgin, you're a whore; joining the dark side generally means crossing a line that few ever re-cross in the other direction, as they content themselves with making less and less meaningful, less unique, less personal, less daring films with generally bigger budgets and more impressive and hyperbolic advertising campaigns.

Maybe there's time to arrest Duncan Jones from this trajectory, though? Sure, Source Code is a really entertaining film, and deserves every penny it makes - I hope it does very well - but come on, man, there's enough blockbuster fare out there; you're able to do something better than that, no? Something that SF fans will be talking about for years to come?

Because no one talks about Tony Scott's Deja Vu, now, do they? (Or while I'm maligning the Scotts, does any of Ridley's post-Blade Runner work hold real interest for anyone?). I was really, really excited to see what Duncan Jones would follow Moon up with. Good as Source Code is, it's compromised enough that now I'm not so keen to see what comes next.
Posted by Allan MacInnis at 8:12 PM