Joey Only is ramblin' on - see him Monday at the Railway

Made an unscheduled trip into Vancouver today to scan the drawings for the post below and check out the Scarebro gig, which was cheap, brief, ended early, and was a lot of fun (especially the joking homage to the Blue Oyster Cult's "Astronomy" stuck in the middle of James' song about how much he hates going to work!). While poking along 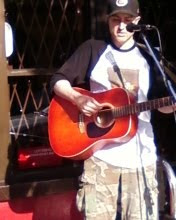 Commercial Drive, previously, I made an unexpected discovery, pausing in front of the liquor store to note an oddly familiar busker and bassist playing Shel Silverstein's "25 Minutes to Go" (best known from the Johnny Cash version). I glanced down at the open guitar case, and saw from the CDs therein that this fellow was none other than Joey Only, whose music I have listened to, but whom I have never actually seen play; his Transgression Trail is actually a really strong, really fun, very Canadian "punk roots" album. I chatted with him briefly, and it turns out Mr. Only is leaving Vancouver to settle in Wells, where he plans to get married, build a studio, and... play Quesnel more often than usual, I guess...!

Joey's last show in Vancouver (for the time being) will be Monday at the Railway Club, starting at 9. Anyone who likes the idea of an "anarchist Stompin' Tom," as he's been described - or just anyone fond of well-played, "real" country tunes - should check him out... He won't be around to take for granted very much longer!
Posted by Allan MacInnis at 12:04 AM