Six Days of the Condor: differences between the book and film 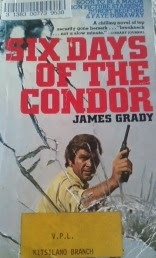 Newest stop on the pulpwagon: Six Days of the Condor, the basis for the film Three Days of the Condor, recently praised here by me. I found a battered ex-library paperback for 25 cents at the Hospital Auxiliary Thrift shortly after writing that piece and couldn't resist. It is just fine as a fast, pulpy read, but it turns out that the people who adapted the film from it (Lorenzo Semple Jr. and David Rayfiel) took considerable liberties with the text, from the title on down, and that many of the things that are of lasting interest in the film are their inventions. Some significant points of difference:

1. Nearly all character names were changed in adapting the book. Redford's character in the film, codenamed Condor, has the real name of Joseph Turner; in the book he's Ronald Malcolm. Joubert (von Sydow) is Maronick. The Faye Dunaway character in the film, Kathy, is a Wendy. And so forth: it's like someone thought the names in the book weren't glamorous enough... which half seems the point in the book - you don't call a protagonist "Ronald Malcolm" without intending something, and indeed, he is presented as a bit of a dullard, at least at the start of the book, farting (quite literally) around the office, avoiding work...

2. The hit at the CIA "literary society" is motivated not by something Condor has found in a thriller he's analyzing, but by a secondary character discovering a discrepency on an invoice that is ultimately explained by a criminal clique within the CIA doing a bit of heroin smuggling. That's what they're covering up.

3. The Middle East, thus, plays no role whatsover in the book! Oil, geopolitical conspiracy... the final accusatory conversation that touches on peak oil... it was all invented for the film.

4. There is simply no character corresponding to Cliff Robertson in the film. He was invented for the movie. Instead, the prime "good guy" involved in seeking out Condor is very briefly played in the film by John Houseman.

5. Kathy, in the film, resists Turner for a bit, then becomes a reluctant helper, somewhat cynically mocking the whole affair (calling herself a "spyfucker" at one point). She's got a whole complex backstory involving photography, depression, a lover, and such. Nothing of the sort is to be found in the book; while the initial abduction of Wendy takes place in pretty much the same way as one sees in the film, she almost immediately, after being convinced of Condor's plight, leaps into bed with him, and much is made, in pulp fashion, of their sex. Both she and Malcolm are presented as less attractive characters than the casting of Dunaway/ Redford would suggest, so there's a bit of a romance to having average people caught up in a dangerous game; author James Grady even makes time to suggest that Wendy's not much of a looker, tho' she gets to disguise herself as a big-chested blonde at one point. She still helps Condor, but seems more of a signifier of male fantasy than a fully developed character...

6. ...which may be why, once her purpose is served, she is shot (but not killed) by Maronick and excused from the action until the very end of the book.

8. The assassin, Maronick, like Joubert, changes sides at the climax and helps out Condor, but in the book, Condor is not content to reconcile and befriend him; he takes what Maronick has done to Wendy - to say nothing of his coworkers - personally, and hunts down Maronick at the airport and kills him.

9. Finally - while the film ends with Turner as a rogue and whistleblower, disgusted with the CIA, there's the suggestion that for having survived his ordeal, Malcolm will be promoted, allowed to play spy for real; the old man is impressed with his performance.

On the whole, the book is far less interesting than the film, is much more of a formula thriller, though well-plotted. Next stop on the pulpwagon: William Goldman's Marathon Man.
Posted by Allan MacInnis at 12:16 PM