More on Phil Ochs - some personal reflections on his music

To be perfectly honest, I'm actually of mixed feelings about the music of Phil Ochs; I certainly don't love it all. I understand Dylan's criticism that Ochs was actually engaged in a sort of "musical journalism", since at times some of Ochs' songs feel just a little too much like newspaper editorials - like "The Thresher," for instance (not on Youtube; the link is to the lyrics). One needs only to compare that tune, about a sunken submarine, with the songs of Stan Rogers - who can milk such pathos out of a sinking ship - to see how uninspired it seems; it really does read like a song written by someone who, almost as an exercise, flipped open a paper, saw an article, and tried to make something topical and tuneful out of it, with recourse to a standardized chatecism of acceptable left-wing views. Ochs' catalogue, particularly on his early albums, is dotted with such yawners, which generally have aged poorly, and are my least favourite of his songs. Though SOME of his early songs have great passion to them - like the Latin-inflected "Bullets of Mexico," or the painful "I'm Tired," which seems to be the first song of his, of many, to prefigure his eventual suicide - prior to Pleasures of the Harbor, one has to tread somewhat carefully through his catalogue.

I further can appreciate what Peter Stampfel of the Holy Modal Rounders says about the overly-sincere, somewhat overcooked earnestness of some of Ochs' material: it's not surprising that anyone who believed in the importance of his own contribution to the world so much that he aspired to change it with his songs would end up with problems with alcohol and depression, as idealism and ambition gave way to disappointment and despair. One could imagine Phil's friends advising him to "lighten up" - an infuriating bit of advice, whenever it's given, but maybe a wee bit appropriate, in this case. 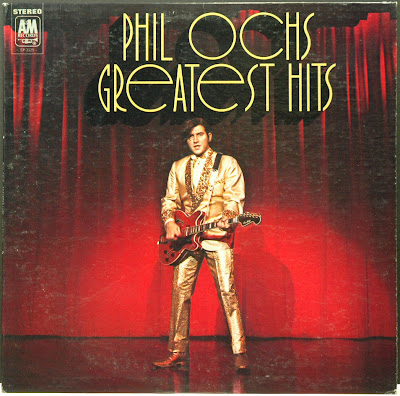 On the other hand, I quite agree with Stampfel that there's a a charm to Ochs' later, somewhat playful, decidedly countrified material - like the delightful "Gas Station Women". The sort of playfulness on hand there could have, perhaps, offered Ochs a way out of his creative impasse, had he received the slightest encouragement to go in that direction. I absolutely love the whole Nudie-made gold lame suit shtick that began with his humorously-titled Greatest Hits album - a shtick which, referencing his desire to blend Elvis with Che Guevara, combined self-deprecating self-satire with a brilliant provocation of his audience (tho' I must say I didn't really need for him to go so far as to cover "Okie From Muskogee," which he did, to boos and catcalls, wearing said suit, at Carnegie Hall; that appears on the rare 1970 Gunfight at Carnegie Hall live album, released only in Canada, since the label had no faith in it. Including that song in the set seems less like a provocation and more like suicide-by-audience).

Eugene Chadbourne, my favourite living American musician (due to pass through town in early September, more to come on that later) has done some terrific covers of Ochs' material, notably "Knock on the Door," one of the more timeless songs Ochs wrote. He said this about Ochs' gold lame years - during which Ochs would also pepper his set with Elvis and Buddy Holly medleys and the like - when I interviewed him a few years ago:

I saw [Phil Ochs] several times when I was a teenager, I always had to go alone because all my friends hated his voice. He was a huge inspiration. One thing that is interesting is in Boulder, Colorado, he did his rock and roll shtick and nobody objected at all. I thought it was weird when that Gunfight in Carnegie Hall disc came out with the audience getting upset, I thought New Yorkers must be really uptight.

True enough, but then again - as I think Doc Chad and I continued off-the-record, the suit was SUPPOSED to get a reaction... Regardless, I love the idea of it, as I generally love it when Ochs actually uses his HUMOUR to make points. Take "The Party," for instance - which, with its "laughing maniac" narrator obsessively retuning his piano from beneath a rug, definitely seems to have some bearing on the psychedelic experience, regardless of what's been said about Ochs being uncomfortable with drugs. It's bursting with sardonic wit, imagining Ochs as a sort of lounge-singer/spectator in the midst of a display of contemporary decadence that taints everyone present, including the singer. (Lyrics here). It's a brilliant piece of songwriting and shows Ochs seriously grappling with the complexities of the time he lived in and his role in it - it's always seemed one of his masterworks. 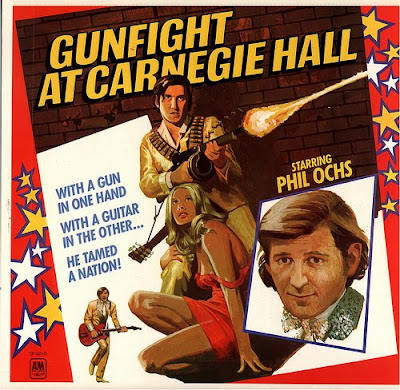 Ochs' humour could also turn savage, too, in songs like "Cops of the World," still one of the great songs about American imperialism; in my ESL classes, I occasionally provoked interesting conversations among Korean and Japanese students, familiar with American military bases and the various rapes and such that occur in their proximity, by playing them the song and drawing their attention to the lines, "We're hairy and horny and ready to shack/ and we don't care if you're yellow or black/ just take off your clothes and get down on your back..." I was very happy to see some of my students get it, and happier still to know that the song probably raised their esteem for Americans a bit, knowing that an American wrote it. In addition to a very clear, very honest perception of political realities, there's a really fiery wit at work here, razor-sharp and fearless; it's one of Ochs' more appealing attributes (tho' on the whole I think I prefer "Gas Station Women," to be honest!).

I also love Ochs' romanticism - evident in "Pleasures of the Harbor," say, inspired by the John Wayne/ John Ford collaboration The Long Voyage Home; and, despite finding them painful, I also really appreciate his songs about his depression, especially "The Scorpion Departs but Never Returns." Say what you will about self-pity, self-indulgence, or narcissism, all of which are evident in this song (or "Bach, Beethoven, Mozart and Me," or "No More Songs" or "Rehearsals for Retirement") - there are times in ones life when one really does need to SINK a little bit, to keep sailing; as Nietzsche says somewhere, "the thought of suicide is a powerful solace; by means of it, one gets through many a bad night." In the long term, that didn't work out so well for Ochs, obviously, but if he hadn't written such songs, perhaps he would have come to an end even sooner... 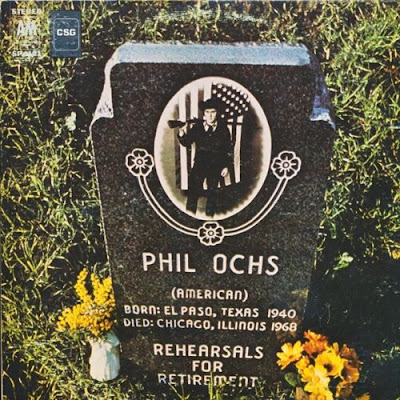 So I don't love EVERYTHING that Phil Ochs recorded. I just love ENOUGH of it that he fascinates me. Hope people will get out to see the documentary about him at the Cinematheque; if I have the stamina, I'll post some outtakes from my Kenneth Bowser interview tomorrow night.
Posted by Allan MacInnis at 10:59 PM

If you're in Chadbourne stuff you should check this blog :
http://chadbourneries.blogspot.com/

If you're in Chadbourne stuff you should check this blog :
http://chadbourneries.blogspot.com/