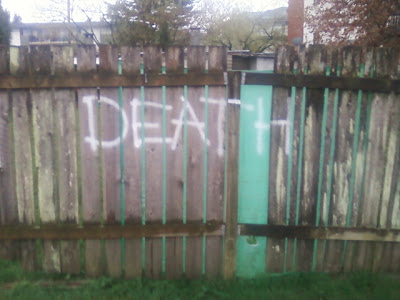 Excepting maybe five or six days a month when I go into the city to do business, meet friends, or see the odd concert or film, I look in on my mother every day. I cook her dinner (and mine, too - I almost always eat with her), help with clean-up, read her mail to her - she will likely never fully recover the language functions lost in her stroke - take care of her shopping and phone calls, and mostly keep her company. She isn't very social, isn't very inclined (unless there's a slot machine involved) to leave the apartment, so mostly we watch her favourite TV shows, or movies that I bring over. She favours courtroom movies, and loved And Justice For All, Trial By Jury, Runaway Jury, 12 Angry Men, Class Action, and so forth, though I will occasionally make her watch some weird movie that I want to see; she has very low tolerance for SF or horror, alas, considering most such films "ridiculous." Couldn't even get her into Close Encounters, the other week... After one or two movies, we listen to music mixes I made to accompany Scrabble games when my father was alive, mostly of oldies and country music that they grew up with, and play gin rummy, which, her math difficulties aside, she sometimes wins (I don't always try very hard to beat her but even when I do...). She's very sweet, very playful, very appreciative, and pretty much alone in the world besides me, with the exception of a friend she sometimes goes to casinos with. I take looking after her pretty seriously, and I actually think I do a pretty good job of it. She's getting by okay.

Every day, between my apartment and Mom's, I walk past a piece of graffiti on a fence, sprayed in white by a local youth, no doubt: the word "Death," in enormous white capitals. It is a hard thing to ignore, especially when you pass it by twice a day. At first it was a sort of cynical validation of  my lifelong feelings about this rather bleak little burg, a comment on the creative death that one finds here. Then it started to shift, becoming a reminder that Mom will not be with me much longer, and that - particularly given all the regrets I had after my father's death - I should treat her very, very well. Lately, though, when I walk past it, I feel like it's reminding me of my own inevitable death. Here I am, 44, overweight, single, pretty much jobless, at a considerable remove from my friends and the places and things that interest me.  Now that it seems my UBC experience is dead in the water - they never even officially wrote me to tell me that I wasn't being accepted to the MA program, despite six-for-six A+ grades, a substantial list of publications, and some amazing references - I have no clue what I want to do with my life, and I spend a third of my time looking after someone else's needs, which makes it very hard for me to get my own shit together. What about my own needs? What about me? How much longer am I going to be alive? (Unless I get a lot healthier, I'll be lucky to get another thirty years). Will I accomplish enough to feel like my being alive is vindicated? Will I actually get to experience a real love relationship, ever, in my life? (Because my relationships have been few and far between,  seldom very deep, and often measurable in weeks; and the sort of women I meet in Maple Ridge are somewhat uninspiring. Yet to meet a woman who was actually enthusiastic about being in a relationship with me, with the exception of one kind of scary one I won't discuss at length here). I don't really want to have kids, but it would be nice to be in a position to do so, which means being financially secure and in a position to take care of them properly; I'm starting to doubt that will ever happen, that I'll ever own my own home, have a wife, a dog, a child... When I die, there'll be nothing left of me but a few traces online and a big pile of (admittedly somewhat neat) shit to distribute between my friends and/or thrift stores (which is where about 1/3 of what I own came from in the first place, anyhow). Nevermind my regrets after my father died - what will my regrets be like when it's my time to go?

Nowadays I actually get a little uncomfortable passing that piece of graffiti, truth be known. Things are starting to weigh on me, out here.
Posted by Allan MacInnis at 12:00 AM