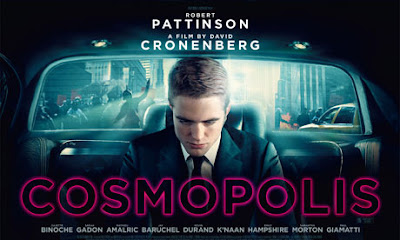 Just for the record, I thought Cosmopolis a remarkable, finely crafted, and thought-provoking film, and very, very interesting when viewed in light of Cronenberg's body of work; for all his faithfulness to DeLillo's text, he's made it his own, and the film will be very rewarding to anyone who has thought in depth about the themes and motifs in his earlier films. There's even what seems to be a deliberate backwards-looking element to the film, a conscious evocation of Cronenberg's previous cinema, with music designed to remind one of Crash, a title sequence that does with abstract expressionism what Spider did with mold, an old-fashioned barbershop at the film's climax that suggests Eastern Promises, and an intense engagement with language that brings to mind Stereo. In ways, it would be a perfect film for the director to retire on, though I hope he has no plans to do anything of the sort. Be prepared to do mental work, however, if you see it; lazy viewing (a passive desire to be entertained) will not be rewarded, and it IS a talky film. And it's dark - very much a film about (if I can presume to give a mild thematic spoiler) death and the death instinct. The Straight title for Ken Eisner's pan of the film describes it as "a long drive to nowhere," but that's kind of the point - the film to me seems less a failed political allegory than a (mostly*) successful allegory for human life, and the ways in which we go to meet our death. The trappings of politics are everywhere, but may be a bit of a red herring - the relentlessly slow creep of the limousine forward is more the to the point than what we see going on on either side of the window...

However, I don't really understand the point of reviewing the film, since anyone I imagine caring about Cronenberg's cinema will see it and be rewarded (certainly the friends I was with all enjoyed it, and our conversation afterwards was animated indeed). If you like idea-rich, carefully crafted films, Cosmopolis is for you; if not, why are you even reading about it? ...Truth is, my head has been so deeply plunged in Cronenberg's peculiar cinematic orifice in recent months that I have no idea at this point how to address a reader who is not of that mindframe; I can in no way be "objective" about this film.

...and really, why would I want to be? This is the latest work by Canada's most important filmmaker. It is very  much of a piece with his corpus, which is a welcome relief with the not-very-inspired or particularly Cronenbergian walk-through of A Dangerous Method. That film I have not yet been able to bring myself to revisit; Cosmopolis I am eager to see again, soon. The only question with this film, as with any true work of cinematic art, is not so much of it being a "good or bad movie" as much as it is about our being good or bad viewers: the burden is on us, and it's been obvious for years that Vancouverites as a population (with obvious exceptions) are failing that particular test, so...

*(I say mostly because I actually think the final scenes with Paul Giamatti needed to be trimmed a bit, as they go on at such length that they diminish the impact of the scene, risk losing the attention of the viewer. Nowhere else did I feel this in the film, but at the end - an important point in a film! - I admit that I did. Maybe on subsequent viewings these scenes will play better, however...)
Posted by Allan MacInnis at 10:53 AM