Beyond the Black Rainbow at the Vancity Theatre 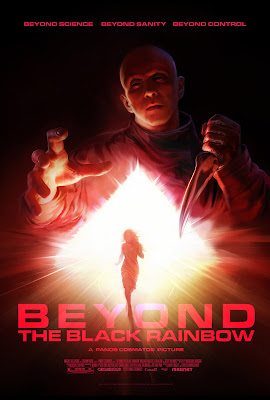 Note: I have now blogged an interview with Beyond the Black Rainbow cinematographer, Norm Li.

Cineastes of Vancouver, WATCH THIS SPACE FOR MORE about the Vancouver-shot, fascinatingly and self-consciously retro, and stunningly visual psychedelic SF cult classic of the future, Beyond the Black Rainbow, opening July 6th at the Vancity Theatre. While you wait, you can read this, or click the title of the film, above, for the trailer and more, including a really cool bit of faux-VHS box art. If you care about psychedelic cinema, or hard SF, or the interface between experimental filmmaking and genre films... If you grew up dropping acid in the suburbs and watching THX 1138 and 2001: A Space Odyssey on your parents' TV late at night... if you've read The Search for the Manchurian Candidate, or other books that deal with the interface between the psychedelic sixties and MKULTRA spook culture... If your favourite John Carpenter movie is Dark Star... If you've seen every film David Cronenberg has ever made, but have a special fondness for the early ones, and secretly wish he'd remained disreputable... or if you just want to see a film that hardcore cult film aficionados and elite cinephiles of the future will forever talk about (in tones of confusion and awe) as somehow emerging (with not much in the way of a visible cinema culture to support it) from Vancouver in 2010, when by all rights it should have been made in Toronto in 1983, you MUST SEE THIS MOVIE. Fans of Jeremy Schmidt (Black Mountain, Sinoia Caves) will want to check it out too, since his soundtrack (analog synth worship of the highest order) is amazing; he kicks Vangelis around the block, runs roughshod over Tangerine Dream, and creates probably the coolest electronic film score since Forbidden Planet. Oh - and not that I would ever advocate such things - if you like watching movies whilst under the influence of acid or 'shrooms...

...and you know where I can get some for opening week...

Anyhow, WATCH THIS SPACE. More will follow. (Actually, don't watch this space, but watch the blog, since I'm putting these up as separate articles, the first of which is here).
Posted by Allan MacInnis at 10:50 PM