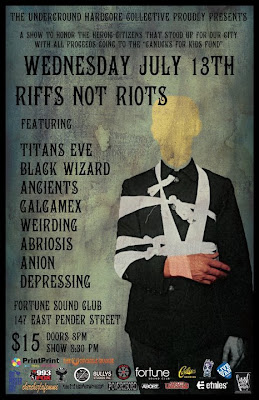 Yet ANOTHER cool event coming up - Titan's Eve headlining Riffs Not Riots at the Fortune Sound Club, on July 13th. I wrote about Titan's Eve show at Funky's a few months ago, here - they're a really promising local metal band. The event, the press release informs us, "is to honour the heroic citizens of Vancouver that stood up against the hockey riots that took place last month on June 15th when the Vancouver Canucks loss Game 7 to the Boston Bruins during the Stanley Cup Finals. Proceeds from the event will be donated to Canucks For Kids Fund, a charity run by the Vancouver Canucks NHL Team... Titans Eve's drummer Casey Ory commented on performing at the charity concert: 'Titans Eve is honored to share the stage with all the other great bands playing this event. We stand united with them, the organizers and everyone else who opposes mindless, opportunistic violence. As well as to show to those outside of Vancouver, that the vast majority of us have pride in our city and only want good things for it.'" 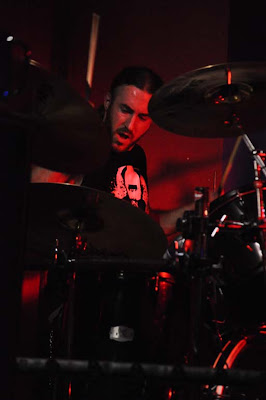 Casey Ory of Titan's Eve by Femke van Delft, not to be reused without permission