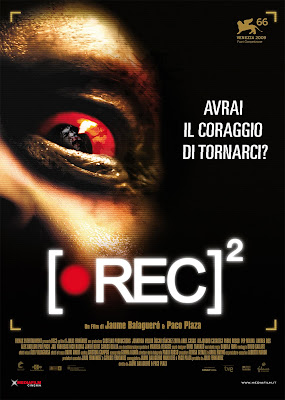 It's the sort of film that strives to ratchet up the tension (and the hysteria) to unbearable levels, and the last half-hour had me jumping constantly. I liked it best before the rollercoaster got rolling, in fact, since relentless shakycam stuff - Blair Witch, Cloverfield, whatever - starts to all sort of blend together in my mind, just as too much music with the knobs turned to eleven starts to ultimately have a numbing effect - but I don't mind the odd jolt of extreme cinematic experience, and this is certainly that. What was it that Ray Hicks said - a little adrenaline cleans the blood?

What I didn't bother to praise, as self-evident, was the simplicity, the elegance of the film: one group of people and one camera locked into one building with one nasty-ass variation on the "rage" virus spreading like wildfire inside. The North American remake of the film, Quarantine, kept pretty much to this formula, too, without trying to impose too much of its own imprint on things: a straight-up English language remake, it worked almost as well, though losing points, of course, for not being the original.

Here comes [REC]2 - Spanish trailer here - and it really feels like the filmmakers are defying the Americans to copy this one. Gone is the elegance, the simplicity. We now have (I think) seven cameras to toggle back and forth between - though some go out of service at different points. In the course of the film, we will discover three different groups of people in the building, not counting the infected. And - we approach spoilers - what seemed a relatively straightforward explanation for the infection, involving a virus, is now significantly complicated with a Catholicism so intense that it makes Constantine look like social realism. I made Ma watch it this evening, and she was rolling her eyes toward me every five minutes and - with traces of a smile - announcing repeatedly that the film was "ridiculous."

No argument there! But it's also highly entertaining, and I have to hand it to directors Paco Plaza and Jaume Balagueró - who also made the first film - the shakycam stuff is deftly handled indeed; it's amazing how much information can be captured by a camera as it spins out of control to the ground. There's also a completely unexpected homage to/ theft from a certain early Cronenberg film that will get true genre fans grinning from ear to ear in its audacity, and a moment that at least bears SOME resemblance to the "blood test" in John Carpenter's The Thing - but only some. While it's utterly impossible to take what transpires seriously - it's so over-the-top metaphysically that I don't even begin to want to analyze it - horror fans will definitely want to check this movie out, and will likely love it, even if they can't take it seriously.
Posted by Allan MacInnis at 12:04 AM