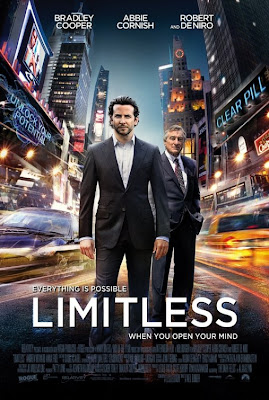 Limitless is a very smartly-made thriller involving a "cognitive enhancer" with amazing potency and its effect on a failed writer, who suddenly finds himself damned near invincible.

Or so he thinks.

Wish I'd seen it theatrically, it's really quite impressive. A commercial film, sure, perhaps squandering a BIT of its potential by spending so much time in the waters of genre, as it's not without elements of the action movie or corporate espionage thriller - since our main character gets ambitious, and gets in trouble; but it's also a hell of an interesting drug film; an exciting and inspiring ride; and a finely crafted, nicely observed bit of filmmaking. Not sure I admired it enough to ever want to own a copy, not sure it's morally important or politically significant (it's not the sort of film Robin Wood would have spent much time getting excited about)... but I watched it twice today, on DVD, with only a few hours in between screenings, and there aren't many movies I encounter rich or engaging enough to sustain that level of attention. I'd welcome a sequel, since there's a lot of stuff that could be done with the premise of this film that it doesn't even approach. Even still: highly recommended.
Posted by Allan MacInnis at 2:02 AM