City of Life and Death: the newest film on the rape of Nanjing 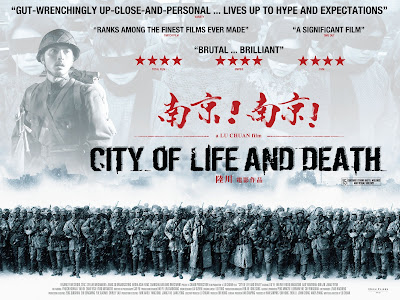 Opening next week at the Vancity Theatre, the most ambitious and probably the most successful film I've yet encountered about the Nanjing (or Nanking) massacre, City of Life and Death (AKA Nanjing! Nanjing!). It was made in 2009 and is just turning up in town now. A huge hit in China, it's less Eurocentric, less formulaic, and more potent than John Rabe - though that was an at least somewhat interesting film in its own right. It's also more emotionally effective, more engaging as cinema, and probably thus will prove more valuable as a tool for stirring the waters politically than the somewhat odd documentary made about the atrocity a few years back (which I wrote about here, including a mini-interview with my father about his feelings about the Japanese). As with John Rabe, it struggles a little to create interesting stories for its Chinese characters, perhaps because the main function of Chinese in the Nanjing narrative is to be killed or raped, usually en masse (in ditches or fields for the former, "comfort stations" for the latter); while at least some of the Chinese who die early on are given ennobled deaths, only a handful we are introduced to make it anywhere near the end of the film, and in most cases, their death scenes are likely what you'll remember most vividly. There may be something inherent in history that this stems from; some 200,000 to 300,000 Chinese died during the Japanese occupation of that city, though Japanese right-wingers - the moral and intellectual equivalents of Ernst Zundel or Jim Keegstra, though there are a fair number of them per capita in Japan, and they are not as reviled or without influence as one might like - dispute that figure, of course.

The stroke of genius on director Lu Chuan's part is to make the moral centre of the film a young, naive, but fundamentally decent Japanese footsoldier, Kadokawa. While in fact the film bends credibility at times in keeping him likeable - and has attracted controversy in China for doing anything of the sort - this is smart narratively; he's around to observe most of the major developments in the film, and since we get to know him a bit and get used to his perspective (as opposed to that of the Chinese martyrs who die in the first couple of reels), can thus be put through transformations that bring home the realities of what happens. Because he is sympathetic, using him as the main character is clever politically, as well, allowing the filmmakers to dodge the obvious bullet of "Japan bashing;" Kadokawa's presence makes the film seem less like a propaganda film than one with only Chinese protagonists would - or at least like a much smarter, more complex propaganda film. It might even help to engage Japanese viewers - if any actually find their way to it, which is unlikely, since films of this sort tend not to get distributed there on any scale, if they play in Japan at all.

Very interesting, too, that what happens in the comfort stations is central to what Kadokawa experiences. Both previous films mentioned above shy away from spending too much time on the treatment of the women of Nanjing by the Imperial Japanese Army, but, tho' it's not without a level of artifice and quasi-Spielbergian manipulation, the film is undeniable effective in these moments - though somewhat weirdly, insofar as it priviliges the fate of a Japanese prostitute brought in to work the comfort stations, before Chinese are being widely rounded up, even though there are Chinese characters who could have served a similar role. It's almost like Lu Chuan doesn't believe Japanese (or international audiences?) will acknowledge, or care about, or accept as "objective" the suffering of these women if it isn't happening to a Japanese character, as well - a strategy which has potentially insulting implications, but which may also touch on something true.

I've got little else to say about the film, but Shelly Kraicer, on the Cinema Scope website, has an excellent and readable article for further consideration, largely dealing with the Chinese context of production and reception. He rightly calls the film on its formal totalitarianism and appears to have done real research for the article; I think I admire it a bit more than he did, since I imagine more how it might be seen by intelligent and sensitive Japanese viewers (who I think would find the film valuable). Also some good comments on the Japan Today site, in response to an article that has been removed.

If these matters interest you at all, the film is worth checking out...
Posted by Allan MacInnis at 1:07 AM

Whoops! Thanks, have corrected it.