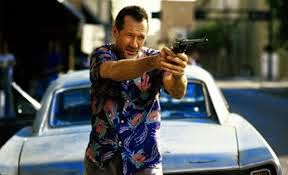 Caught up with the 1990 thriller Miami Blues tonight and was delighted at how fun it is. It's a rare film that I like more on revisiting it than I did the first time around (circa 1991, on VHS). Maybe it's just that I've been watching a lot of films noir in the interim and have attuned myself to the ways that crime texts can play as assaults on and/or critiques/ send-ups of the American way of life, but I found the film brilliant, tonight, in ways I didn't previously. It's kind of essential, a film well-worthy of its Blu-Ray release (happening this upcoming week). 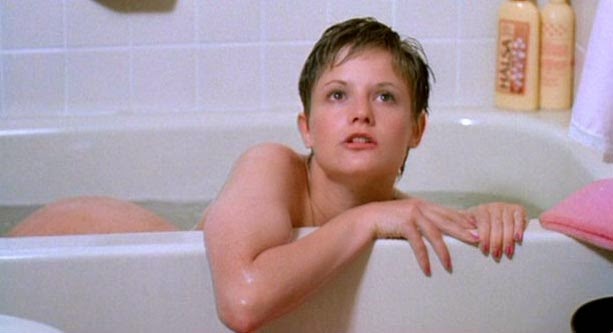 Truth is, I haven't cared for George Armitage's other films so much. I thought Grosse Point Blank kind of juvenile (sorry) and I think I shut off his last one, The Big Bounce, before half an hour had passed - so maybe at least some of the credit for the intensity of wit on display should go to the author of the novel, Charles Willeford. Willeford may be best known now for the book Cockfighter, filmed by Monte Hellman, but he was a fine crime writer whose work dates back to the glory days of vintage David Goodis and Jim Thompson. 1955's Pick-up, in particular, is an amazing early read by him, a rare novel that forces you to completely reevaluate everything that has gone before in the final sentence, which gives the novel (enjoyable enough before that sentence) a provocative political heft and depth, making it seem much more than it had been up to that point (sorry, but I can't spoil it; if you like bleak hardboiled writing as a vehicle for criticizing America, just read it, trust me). Later in his career, Willeford also wrote the Hoke Moseley series of police thrillers, of which Miami Blues is the first; I haven't read any of those, however, so I can't say exactly what of the film his his, and what is Armitage's. 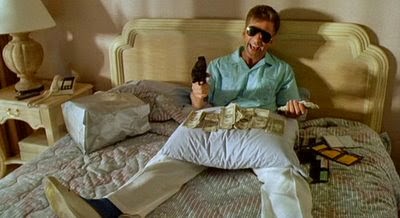 Anyhow, as for the film, Armitage does an able job with the material, making it fast and fun, and he also has a fantastic cast to work with. Fred Ward, one of those criminally under-used, constantly engaging actors, who I will watch in almost anything, stars as a humiliated cop who, along with his badge, has the indignity of having his false teeth stolen, briefly earning him the nickname "Gums." Jennifer Jason Leigh - in her late 20's, but looking like she's in her mid-teens - does great work as a young, naive prostitute who falls in love with a sociopathic criminal, played by Alec Baldwin, pretty much at his best, even tho' his performance is more than slightly unhinged. The two set up a white-picket-fence version of happiness and satisfaction and play house in a way that is both heartbreaking and very, very funny. It's seldom a film can satirize people's shallowness, confusion, and willful self-delusion while at the same time making you feel sorry for the characters - Jennifer Jason Leigh in particular - for being the unwitting victims of said satire. There's a great final line of dialogue, too, which I was pleased to discover myself anticipating, remembering it word for word from my last viewing of the film, some 25 years ago. (I believe I only ever saw it once, or maybe twice, so that's one resonant line).

Anyhow, fun film. Haven't much else to say about it, but it would make a great double bill with Werner Herzog's Bad Lieutenant: Port of Call New Orleans. (And if a certain video store guy happens to read this - you're right, Ward totally channels Warren Oates). There's an entertaining and much more detailed read from a fellow blogger on the film, here, if you want more (he has clearly read much more Willeford than I). Check this film out, folks - it's great.
Posted by Allan MacInnis at 12:16 AM