After a friend who shall remain nameless expressed his admiration for Inherent Vice, I resolved to see it, but I didn't necessarily mean to buy it. Then on the first day when it hit the shelves, I stumbled across an error at a HMV location, where they'd mis-labeled the Blu-Ray/DVD combo pack at the price of $18.99 - a very low price for a new release, one which they amended that same day to $24.99. They were willing to honour their error, and I was willing to take advantage of it, since I'd only ever considered buying it in the first place because the price was low. I mean, who has $30 to spend on anything these days? The fact that the price was going to go up $6 as soon as I left the store made up my mind for me.

Call me foolish, if you will, for still buying ANY film, in the age of free downloads and such, without having SEEN it first. Still, having seethed against There Will Be Blood - surely one of the most over-praised films of the 21st century, which led me to re-evaluate all of PT Anderson's previous films and kind of erase him from my list of filmmakers to follow - I actually was quite impressed, when I begrudgingly got around to it, by The Master, finding it a highly interesting (fictionalized) look at Scientology. The film is critical, but also able to make the "appeal" of Scientology comprehensible, which it previously hadn't been for me. I admire anyone who approaches an argument against something by granting it as much value as possible, prior to picking it apart; that's the correct way to destroy an opponent, from a place where you can demonstrate that you have tried your hardest to sympathize and see the truth in their point of view. Beats the hell out of burning straw men (which is easy enough to do when it comes to the evil overlord Xenu). Plus it had terrific production design and performances, and compared to some of the excesses PTA can get up to, a nice restraint to it - it was relatively small scale compared to, say, bloaded "masterpices" like Magnolia and There Will Be Blood, and I like PTA best on a smaller scale anyway (Hard Eight, Punch Drunk Love). Maybe Inherent Vice would pay off, too?

Inherent Vice BEGINS brilliantly, granted. I mean, using Can's "Vitamin C," apparently in its entirety, for early scenes of Joaquin Pheonix doing his hippie-PI-in-LA thing is just delicious, and it's made even more delightful by the decision to put ANOTHER Can song on the soundtrack right after ("Soup"). Great ideas - I haven't heard Damo Suzuki on a movie soundtrack since I caught up with Deadlock a few years ago. More people should use Can in movies. There's also one absolutely brilliant gag, so to speak, where Josh Brolin, as a menacing, square, but not completely virtueless cop nicknamed Bigfoot, eats a chocolate coated frozen banana in closeup, while driving, and we see both this and Joaquin Phoenix' horrified/ quizzical observation from the passenger seat on the far side. It is unmistakably the figure of straight white male authority blowing a big black cock, and it's very entertaining to watch. Alas, it's the high point of the film, and takes place about fifteen minutes in. 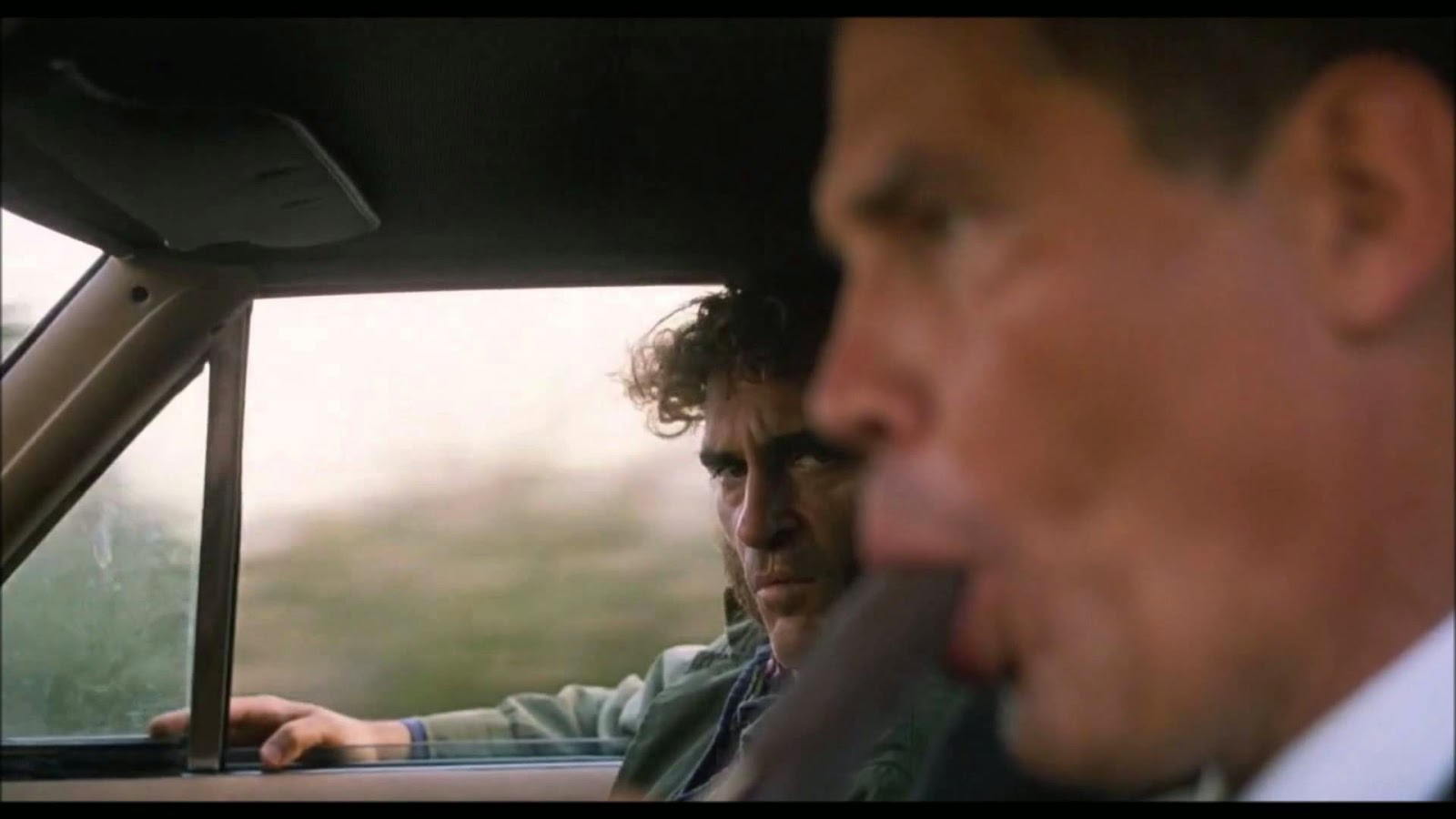 For those who don't know, Inherent Vice very much comes from the world of hip/ hippie/ counterculture PI films; someone out there has described it as a cross between The Big Lebowski and The Big Sleep, without realizing (apparently) that The Big Lebowski is itself a playful riff on The Big Sleep. Other writers, in describing the film, have mentioned Altman's version of The Long Goodbye and Cutter's Way (a must-see, if you've missed it, especially if you like Jeff Bridges; though the show is stolen by John Heard, who rises so far above his usual range to be pretty much unrecognizable). I love all those movies, in different ways. The problem is that once you take away all the things that Inherent Vice is referencing, all the nods to other texts, all the "homages" - including the idea of a rehab clinic dealing drugs, lifted directly from Dick's A Scanner Darkly, there's not much else left to the film, just some jokes about a massage parlour with a "pussy eater's special" (though they reminded me of From Dusk Til Dawn) and cliche'd chuckles at our pothead hero's dirty feet. There are very few original ideas that I noticed, and nothing much in the way of a gripping narrative. Plus the fucking thing goes on for two and a half hours; it sprawls with a lazy indulgence on the screen, giving you too little for too long, while not even seeming concerned that it is doing so. I mean, I didn't like The Big Lebowski either, the first time I saw it, but at least I didn't have to sit there not liking it for two and a half fucking hours. That's just rude.

Mind you, part of it might be due to Thomas Pynchon. I think I only ever read the first few chapters of a couple of his books, found Gravity's Rainbow daunting and incomprehensible as a teen, then tried Vineland in my 20's and found it surprisingly trivial and uninteresting. (I think I actually began that book twice, on different occasions, and came to the same conclusion each time). A friend of mine delved a bit deeper, actually completing The Crying of Lot 49, but we both came around to proclaiming (between ourselves, anyhow) that Pynchon was all about funny names, countercultural posturing, and pseudophilosophical/ psychedelic cutesiness, but by no means the equal of Robert Anton Wilson, say, or even writers like Kurt Vonnegut or Tom Robbins. We couldn't see any reason why anyone cared, why he had the rep he did. I can't say I ever did the man justice, but nor was I ever inclined to, after my early dips into his pond. In fact, I forgot all about him until about halfway through Inherent Vice, which suddenly started to remind me of him in force, as characters with names like Flatweed and "Dr. Buddy Tubeside" start to manifest, EXACTLY the sort of thing I didn't care for about Pynchon when I actually tried to read him.

But that's not to say that the film's failure is Pynchon's fault. PT Anderson has already shown his willingness to cut vast swathes out of a novel in adapting it for the screen, chopping, for There Will Be Blood, pretty much the last half from Upton Sinclair's Oil, wherein we gather the meat of the book lies: the father and grown son compete against each other in the oil industry, one using the principles of ruthless capitalism, and one the principles of socialism. (So I read in a review in Z Magazine, anyhow; I didn't actually finish the novel). I might have actually liked Inherent Vice better had he done a similar thing here. Perhaps Stephen Soderbergh could make a 90 minute edit for us?
Posted by Allan MacInnis at 10:05 PM